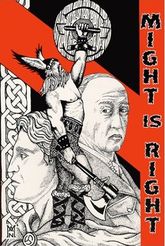 Cover of the 14 Words Press edition of Might is Right. Sadly, this is one of the more competent illustrations.

Might is Right or The Survival of the Fittest is an 1896 book written by a mysterious individual who called himself Ragnar Redbeard. It is a lengthy rant endorsing an uncompromising form of social Darwinism.

Good, bad, I'm the guy with the gun[edit]

Redbeard's worldview, and the book's title, stem from the idea that physical power, in particular the ability to defeat one's enemies in combat, is the only real source of authority. The question of what is right, he argues, will never be answered by philosophical debates, but rather, by whoever has the might to impose their moral worldview onto others. He cites King David, William the Conqueror, George Washington, and Napoleon Bonaparte as examples of great men who managed to triumph and impose their will.

From this, he jumps into egoist anarchism and a rejection of traditional morality, treating "weakness" with scorn and pacifism as an unnatural condition that produces weakness. He was vehemently anti-egalitarian and anti-Christian, arguing that "Socialism, Christianism, Democracism, Equalityism, are really the whining yelpings of base-bred mongrel-multitudes". He regarded the Golden Rule as a "coward rule"; commenting on Jesus' command to "do unto others as you would have others do to you", he scoffs that "No baser precept ever fell from the lips of a feeble Jew". Elsewhere, Redbeard rewrites the Sermon on the Mount: "Blessed are the Iron-handed, the unfit shall flee before them. Cursed are the Haters of Battle, subjugation is their portion".

On the subject of civilization as it existed at the time, he was just as dismissive. He regarded it as an emasculating, domesticating force that produced "men without sap", "sterilized women", and "hordes of faithful slaves", echoing similar arguments made a century later in the novel Fight Club. By eliminating war, he felt, civilization made it impossible for men to live in accordance with their natural urges. He identified strongly with the criminal element in society, particularly successful criminals who didn't get caught, arguing that they exhibited the characteristics he held in esteem. "The [only] difference between the man who rules in the Castle, and the other man who is chained in the castle-dungeon, is the difference between success and failure. There is a strong affinity between the criminal and the conqueror."

Although remembered chiefly as a sort of proto-Ayn Rand tract, Might is Right is also a white supremacist screed, a result of its belligerence mingling with contemporary views on race. Redbeard is dismissive of the notion of racial equality: "What white father for example, would encourage the marriage of a hulking thick skulled Negro with his beautiful and accomplished daughter?", he asks. "Would he enthusiastically 'give her away' to the matrimonial embraces of a Chinaman, a Coolie or the leper-hugs of a polluted 'mean white'?"

He goes on to argue that "You have only to look at some men, to know that they belong to an inferior breed. Take the Negro for example. His narrow cranial development, his prognathous jaw, his projecting lips, his wide nasal aperture, his simian disposition, his want of forethought, originality, and mental capacity: are all peculiarities strictly inferior." He adds that "Similar language may be applied to the Chinaman, the Coolie, the Kanaka, the Jew, and to the rotten-boned city degenerates of Anglo-Saxondom: rich and poor. Vile indeed are the inhabitants of those noxious cattle kraals: London, Liverpool, New York, Chicago, New Orleans".

This has made the book popular with modern white supremacists. In 1999 14 Word Press issued an "Exclusive Millennial Wotansvolk Edition", boasting a preface by Katja Lane (wife of white nationalist David Lane) and hilariously wonky illustrations of muscly barbarians by Ron McVan; presumably intended to portray Aryan ubermenschen, they actually looked more like grotesquely deformed freaks. The book inspired a white supremacist to conduct a mass shooting at the 2019 Gilroy Garlic Festival.[2]

At this point, it probably would not surprise anybody to know that Redbeard was also ragingly sexist. In his estimation, women are incapable of rational thought, and their place in society is in submission to men for the purposes of reproduction, never to be held as the equals of men. "A woman is primarily a reproductive cell-organism, a womb structurally embastioned by a protective, defensive, osseous network ... Sexualism and maternity dominate the lives of all true women. To such an extent is this so, that they have little time left (or inclination) to 'think' and therefore they've never been fitted out ab-initio with reasoning organs."

His views on relationships likewise read like a prototype for the manosphere's fixations on sexual hierarchy, though in his case, he relished how the "alpha males" got all the women. He states that women find nothing so attractive as "a display of undaunted physical prowess", and are "very prone to wed with the men who have slaughtered their kindred in battle." On the other hand, "[n]othing so lowers a lover in a virile maiden’s estimation, than for him to be 'whipped' in a personal encounter with a rival."

In 2019, Santino William Legan posted on Instagram in praise of the book while complaining about "hordes of mestizos and Silicon Valley white twats" supposedly overcrowding towns. Shortly afterward, he committed a mass shooting at the Garlic Festival in Gilroy, California, resulting in three dead and fifteen more injured before he was gunned down in a shootout with the police.[3]

Ironically, Redbeard, who wrote his tract in the days when "white supremacy" specifically meant WASP supremacy, likely would've considered Legan, who identified as being of Italian and Iranian descent, to be the kind of "polluted 'mean white'" that he condemned as among his inferiors.

The book appealed to Anton LaVey, who pinched large chunks of it for his Satanic Bible. Redbeard's memorable statement that "I gaze into the glassy eye of your fearsome Jehovah, and pluck him by the beard — I uplift a broad-axe and split open his worm-eaten skull", for example, is copied word-for-word by LaVey, as was the passage "Can the torn and bloody victim ‘love’ the blood-splashed jaws that rend it limb from limb? Are we not all predatory animals by instinct? If humans ceased wholly from preying upon each other, could they continue to exist?".[4] Indeed, The Satanic Bible can be seen as a sort of Might is Right Lite, with the anti-Semitic, racist, and proto-fascistic elements removed (LaVey having come from a Jewish background) and replaced with mysticism. Peter H. Gilmore, the high priest of the Church of Satan, has acknowledged the inspiration, and wrote a foreword for a reprinting of the text by Underworld Amusements.[5]

The most commonly claimed authors are Arthur Desmond or Jack London, both socialists, albeit each with a strong individualist streak. LaVey and Katja Lane both believed London was substantially involved, if not the author of the entire book; the latter based her judgment on London's distinctive grammar and punctuation.[6][7] However, Jack London scholar Rodger Jacobs said, "the notion is as ludicrous as suggesting that the author of White Fang was a cross-dressing hermaphrodite who buried his sexual shame in manly exploits".[6] London was born in 1876, meaning that, even accepting a later publication date of 1896, that he would have had to written Might is Right in his teens (an earlier publication date of 1890 is sometimes advanced).[8] However, parts of the book read like the product of a teenage mind.

S. E. Parker suggested Desmond's authorship, on the basis of his red hair and beard and his published poetry.[9] The Australian Dictionary of Biography mentions Desmond's "reputed" authorship, noting that he was active in Australia in 1893-4 but may have arrived in the USA around 1895; the ADB in general shows a high level of uncertainty about Desmond's movements, actions, and even his real name.[10]

Whoever authored it, it's hard to reconcile Might is Right with Desmond or London's socialism except if it was intended as a satire on Social Darwinism-in the same vein as, say, Jonathan Swift's "A Modest Proposal". As the 14 Word Press release indicates, Poe's Law applies.