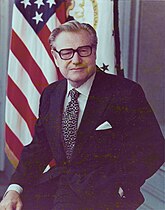 Rockefeller Republican (named after former New York Governor and Ford's Vice President Nelson Rockefeller of the Rockefeller family) or Liberal Republican was a euphemism used to describe members of the moderate wing of the Republican Party. They were the dominant force in the party from the end of World War II until 1964, when the party's conservative elements backed Barry Goldwater for President and did lasting damage to its influence, but remained a powerful wing of the GOP until the late '70s and the ascendancy of Ronald Reagan.

During the New Deal Era, Rockefeller Republicans were geographically concentrated on the East Coast mostly in New York and Pennsylvania. This group of Republicans were nicknamed "The Eastern Establishment" by Movement Conservatives at the height of their power. On most issues they were usually Center-Right to Moderate Conservative when it came to economic issues, Socially Moderate-to-Center Left on social issues, and center-right on foreign policy. Economically they were opposed to government ownership of businesses and Socialism, but supported the New Deal as the ideal form of capitalism in the United States. This is because they supported policies such as moderate regulations on businesses, investing in public infrastructure, supporting the rights of labor unions, and raising the minimum wage. Rockefeller Republicans always dressed their support of the New Deal/Fair Deal/Great Society with "We would like to, uhh, change it, you know?" While they believed in balanced budgets like Goldwater/Reagan Republicans they also believed in investing in education, healthcare, and infrastructure, supporting low-cost public universities and the Interstate Highway System as a way to supply businesses with an educated workforce and modern highways to bolster their growth. Many Rockefeller Republicans came from business and Wall Street, since many of their ranks came from the worlds of business and finance.

While running for office Rockefeller Republicans would contrast themselves with the Democratic Party by styling themselves as the party of "good governance" in contrast to the often corrupt (and often Democratic) political machines of the big cities; they were a "protest vote" in urban areas and often came in as reformers once in office. When it came to social issues like the Civil Rights and feminist movements, they vehemently rejected Social Conservatives like Jesse Helms because they were social liberals with a Very Serious People lens. During the 1964 and 1968 Republican Party primaries, they often ran against the movement social conservatives to expand the Republican Party's base to more minorities. That is why, for example, Gerald Ford wanted someone like Rockefeller as vice president, because he was more socially liberal then Ford. Despite their social liberal views on issues like civil rights and feminism, they were often moderate conservatives on criminal justice issues. This is because, for example, during his 15 years as governor, Nelson Rockefeller doubled the size of New York state police and implemented many harsh laws like the "Rockefeller Drug Laws". While they tended to have Very Serious People views on the social issues of their day, they tended to be more realist in foreign policy.

During the Cold War, they tended to support a realist foreign policy along with espousing internationalist policies that supported international institutions to promote American business interests abroad. Most wanted to use the power of the United States in cooperation with allies to fight against the spread of Soviet communism and help American business expand abroad. They tended to support alliances like NATO and SEATO, along with international foreign aid programs like the Marshall Plan to increase cooperation against the Soviet Union. They tended to be opposed to the liberal internationalism of Woodrow Wilson, but they also tended to be opposed to the isolationism of the paleoconservative old right led by Robert Taft. Throughout the Cold War they were fierce Cold Warriors, but not like Douglas McArthur or Henry Scoop Jackson. This is because Dwight Eisenhower warned of the potential problems of a large military-industrial complex, and Richard Nixon wanted to end the Vietnam War "with honor". In the 1970s, most of the last remaining Moderate Conservatives in the GOP endorsed Gerald Ford over Ronald Reagan in the 1976 Republican Party presidential primaries.

Since the end of the Cold War, the last of the Moderate Rockefeller Republicans were politically killed off during the Republican Revolution of the 1990s. Many of them either switched to become Democrats or Independents. But their political characteristics tended to be ones that were willing to split the differences between Democrats and Republicans on most economic issues, while leaning more Liberal on civil rights issues. In the 2000s/2010s they were Anti-John Bolton, Anti-George W. Bush, Anti-Ted Cruz, Anti-Sarah Palin, and Anti-Donald Trump.

They have been driven to the point of near-extinction from competition from the invasive species of neoconservatism, neoliberalism, and the Religious Right, as well as by the tax revolts of the 1970s. Today's "moderate" Republicans (like Olympia Snowe, Arnold Schwarzenegger, and formerly Chris Christie) are often dismissed as "RINOs" by the activist "movement conservatives" that have taken over the GOP since Reagan, despite said so-called RINOs not really being that much different on overall substance. As a result, what had once been among the most solidly Republican areas of the country, like New Jersey and western New England, are now among the most solidly Democratic, as these areas were hotbeds of the Rockefeller wing of the party. The endangered species status has also been placed in states of the Upper Midwest, where Rockefellers used to be similarly prevalent. During the 1964 Republican primary in which Goldwater was opposed by Nelson Rockefeller himself, Rockefeller's campaign manager asked him to "summon that fabled nexus of money, influence, and condescension known as the Eastern Establishment [i.e., liberal Republicans]." The candidate's reply: "You're looking at it, buddy. I'm all that is left."[1] Following the 1976 and 1980 Republican Party presidential primaries, most Rockefeller Republicans either became Democrats or Independents. This is because following the Reagan Revolution of the 1980s alongside the Republican Revolution of the 1990s, there wasn't really that much room for Republicans like Dwight Eisenhower and Nelson Rockefeller. Today it can effectively be argued that the centrist wing of the Democratic Party (Bill Clinton, Barack Obama) is most similar to the Rockefeller Republicans in policy and ideology. Indeed, in the world that is not the United States, Obama has been compared to the "one nation Toryism" of Benjamin Disraeli,[2] and he's even been explicitly linked to old-styled Rockefeller Republicans.[3][4][5] . Barack Obama has stated himself that he is more of a Moderate Republican from the 1980s, instead of a New Deal Democrat.

Now in the 2020 presidential election, some could argue that the Blue Dog and New Democrats who were running in the Democratic Party primaries could be viewed as Rockefeller Republicans. This includes Third Way Centrists and Moderate-to-Conservative Democrats such as Joe Biden, Michael Bloomberg, Cory Booker, Pete Buttigieg, and Amy Klobuchar. The divide between the "Old Guard" Conservatives and the "New Guard" Progressives of the Democratic Party is actually very similar to the various clashes between Moderate-to-Liberal Republican Thomas Dewey, and the "Old Guard" Conservative Robert A. Taft. Only time will tell whether or not the rise of Alexandria Ocasio Cortez's "Squad" will make the GOP revive the Rockefeller Republican wing of their party. While running for President, then-candidate Donald Trump was considered by some to be a moderate Republican[6][7] (albeit in an admittedly weird way). However, his outstanding flip-flop populism and definite Alt-right quirks disqualify him from being counted as a Rockefeller Republican outright. With his bombastic rhetoric, anti-regulatory extremism and authoritarian "my way or the highway" management style, Trump might possibly go down in history as the first of the "Trump Republicans" instead, taking their hard right turn to a downright horrifying degree.