The claims that Nazi Germany built and operated "advanced propulsion craft" (i.e. flying saucers) that are responsible for (at least some) UFO sightings are a subset of the more general category of claims that (at least some) UFOs are vehicles of terrestrial origin. Different versions include either home-grown Nazi technology, or reverse-engineered alien technology. In scope, they vary from "mundane" top-secret craft limited to Earth's atmosphere to full-scale Nazi colonization of the Solar System. However, this allegedly sophisticated technology didn't exactly help them win the war...or did it?

The theory was flogged heavily by Fox Mulder[note 1] Ernst Zündel in the nineties. 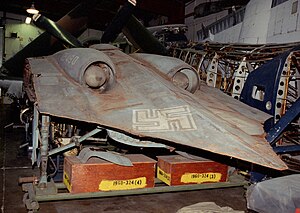 The belief probably stems from the Nazis' forays into the occult (giving birth to the "Nazi mystique") and from the reports of foo fighters by Allied warplane pilots during World War II. Nazi propaganda often touted so called wunderwaffe (German: Wunderwaffen - "miracle weapons"), the frequently outlandish weapons proposed and produced by the Third Reich's war machine (like the 1500-ton tank

). Late in the war, the Luftwaffe was the first military aviation branch to field rocket- (Messerschmitt Me 163 Komet

) propelled airplanes. The performance of these planes far exceeded that of the prop-driven planes flown by the Allies.[note 2] The Luftwaffe also had numerous advanced prototypes by the end of the war, and the designs of some of these planes, like the Horten Ho 229's

flying wing or the coal-powered ramjet(!) of the lawn-dart shaped Lippisch P.13a

, were radical, even by today's standards. It's not hard to imagine what the young US and Soviet soldiers who came across prototypes and plans for these bizarre looking aircraft may have thought. Then too, Nazi Germany was the cradle of modern (space) rocket technology, and some German experts later became very visibly involved in the US space effort (most notably, Wernher von Braun

). Less publicly, German expertise fed into Soviet rocketry development.[1] Robert Heinlein's 1947 fictional novel Rocket Ship Galileo (in which the Nazis have reached the Moon first and established a base there) probably also bears some responsibility for the interest in Nazi spacecraft.[note 3]

According to one version of the fantasy, the Nazis encountered an alien civilization and obtained some extra-terrestrial technology, resulting in the development of an anti-gravity engine called Die Glocke ("the Bell"). Shortly before Germany's surrender in 1945, Nazis somehow managed to sneak this device out to Antarctica, (of all places), where they set up a new base.[2] They're apparently still around, and when they're not busy bullying Jewish penguins, they regularly patrol the globe, resulting in numerous UFO sightings.

in his book, "James Bond is Real: The Untold Story of Political & Military Technological Threats Ian Fleming Warned Us About". Presumably, unlike in Moonraker, their centrifuges didn't consider the laws of physics as more than a set of guidelines.

The independently produced 2012 science-fiction comedy Iron Sky takes the Nazi UFO tale to a new level, summed up by the film's tagline: "In 1945 The Nazis Went To The Moon. In 2018 They Are Coming Back."[3] One wonders why they didn't call the film Astronauzis.