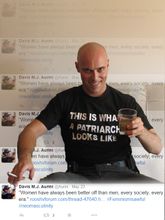 Neomasculinity summed up in one creepy pose.[1]

His vlog posts typically deal in misogyny, evolutionary psychology, and complaints about white knights, along with some healthy fascist fanfare and racism for good measure.

His image, especially the shaved head and goatee combo, bears a remarkable and probably intentional resemblance to Anton LaVey, Kane of Command and Conquer

and Ming the Merciless. LaVey would be less than thrilled to have a fan who falls prey to so many of the Satanic Sins[5] quite so assiduously, though.

Before being unceremoniously booted from the platform, Aurini made YouTube videos. Lots and lots of YouTube videos. Most of them were pieces to camera, in which he enlightens us as to racial and gender politics. Production values were mediocre at best; he is particularly inept at sound recording. We Hunted The Mammoth features many pisstakes of his work.[7] To his credit, he speaks clearly, with good enunciation, in complete sentences.

Early videos featured Aurini sitting in front of a Motörhead poster; he then decided he came across as cooler wearing a black suit and turtleneck and mumbling through a cigarette in his mouth — he sometimes lights the cigarette, but has never been seen to puff on it — with a tumbler of only-occasionally-sipped mystery beverage in his hand. At least one video even shows him with said tumbler in hand while sitting in the driver's seat of his car. And he loves his sp00ky props,[8] particularly his fake skull, which he calls "McCarther."[9] Of late he has taken to cowboy hats.

He has also made a bad short film about nothing, Lust in the Time of Heartache, featuring angst over the plight of the manly male, actual fedoras and ninja fights.[10] Somehow, he managed to get it aired on TV via a Calgary-area indie filmmaking group.

YouTube banned Aurini in late 2018.[11] He is slowly putting all his videos back up on BitChute, and streams on Twitch.

Much of Aurini's most noteworthy racesplaining, such as "Why Blacks Fail", has been taken down,[12] and only survives in excerpts or mirrors posted by stunned critics.[13] (This humanises Aurini, in that it suggests, against all odds, a capacity for embarrassment.)

Although he has many things to say in accord with white nationalism, and the immense value of white culture, he stresses that he does not align himself with white nationalism as a movement, as he considers it "a movement for losers".[14] Despite calling himself reactionary and neoreactionary, he dislikes the alt-right (the neo-Nazi end of neoreaction), describing them as "Leftist infiltration of the Right".[15] (That this coincides with TheRightStuff considering him a ridiculous fool[16] is mere happenstance.)

Quite possibly the finest Aurini video on race is "Ethno-Nationalism and the Metaphysics of Virtue".[17] In this video you will learn the horror of leftist "snake melon"[18] Jews — who, it turns out, were actually responsible for the Holocaust — that black nationalists cause single mothers, and that "the white southerner version of slavery was the kindest, gentlest and most righteous form of slavery that ever existed", and white culture deserves credit for that, dammit. However, he disapproves of white nationalists who want more white babies without considering "virtue": "I've seen the vilest white-knight beta male behaviour out of these degenerates". The video concludes with a rant about where your pineal gland is pointing and the value of divine creativity.

Apart from his famous observation that "women in our culture have become the most decadent sluts since the fall of Rome"[20] in his podcast "Neomasculinity" Aurini discusses the wisdom he's gained from Roosh V:[21]

Davis Aurini converted from atheism to Catholicism; he says that there are only two religions: "belief in God and belief in the God of man / the Mechanical God". One of his most striking views towards non-religious people is that left-wingers are narcissist minions of Satan.[23]

Aurini interpreted the Pepe the Frog meme's adoption by the alt-right as signifying the resurrection of "Kek", a pagan-like god of laughter and stupidity.[24] (A link originally made by Nick Land.[25])

Davis has also made a name for himself by enabling others within the manosphere with similar ideologies. Most notably these include Aaron Clarey, Sargon of Akkad, Matt Forney, Karl Ushanka, and Jordan Owen. This is quite apparent with the Alt-Right Dogs trailer and The Sarkeesian Effect. It should be noted, however, that most of the people Davis enables disassociate themselves from him as soon as they are able to.

See the main article on this topic: Anita Sarkeesian

Aurini had been a non-fan of Anita Sarkeesian for a while, having written about her in 2013,[26] including outrage that ABC News would talk to her about having been harassed by misogynist gamers.[27]

So when Gamergate came along in 2014, Aurini and his friend Jordan Owen[28] announced they were making a movie titled The Sarkeesian Effect: Peering Inside the World of Social Justice Warriors, setting up a Patreon

to crowdfund it at a requested $15,000 a month for five months.[29] (Note that that was to start filming. Though they did take the nearly $9k a month and release a shaky webcam update every month or two.) The project ran into financial problems, as Aurini had correctly assessed men's rights activists' hatred of Sarkeesian, but overestimated how much money they were willing to part with. This was, of course, everyone else's fault.[30]

Stung by the criticisms and the lack of funding, Aurini and Owen released a "teaser"[31] — apparently all the footage they had to date — which looked like it had $25 spent on it and you could see every penny there on the screen.[32] This was all they had produced with several months and thousands of dollars. (Precise amount unknown; they inexplicably failed to provide the level of accounting detail they demand of Sarkeesian.) With just a bit more cash, they might have e.g. read WikiHow and learnt basic facts about microphone and lighting placement. You can see how badly they needed this in their second Patreon paid update,[33] in which Aurini is literally inaudible from 1:20 on due to being out of range of their directional mic. Just the thing to make their paying sponsors think "this is a good use of my money, I have made a correct decision."

In order to demonstrate his filmmaking chops, Aurini responded to critics of the "sneak preview" trailer with a half-hour long vlog wherein he is both barely visible and barely audible, due to having shot it literally in the dark with his usual terrible audio setup.[34]

The pair had a hilarious and messy breakup in early March 2015[35] due to delays in getting anything done and Owen disagreeing with Aurini on how cool Roosh V was (particularly Roosh's proposal to legalise rape, as well as the burning question of whether Roosh actually did get laid in Norway).[36] Sadly, they got it back together.[37] Though breaking up again in July, just before Owen was to release a version of the film, Aurini started a personal fundraiser without mentioning it to Owen, ostensibly to finish post-production.[38]

Aurini eventually released a 40-minute "rough cut" to YouTube on July 15 (then later deleted it).[39] Jordan Owen's 2½-hour final version was premiered at a Gamergate meetup in Atlanta on July 31 to a total audience of nine people (including Owen)[40] and released for sale on Vimeo on September 14.[41]

SPOILER: The big reveal of the film was, per the trailer, to be that Feminist Frequency's address is … a post office box!! They tracked it down and filmed the PO box. That is, their planned revelation demonstrated why people use PO boxes.[42] Owen eventually decided this wasn't very good, so the final cut has … no conclusion, just a rambling Ayn Randesque "GamerGalt" speech.[43] Which was apparently an hour originally.[44]

WORSE SPOILER: Owen refused to have it in the final version of the film, but, according to Owen, Aurini had decided, based on literally no evidence, that Sarkeesian must have been raped by her father, and apparently wanted to make this utterly unsubstantiated claim the capstone revelation of the film.[45]

The best part? Davis later said in a Google Hangout call he had never actually watched any of Sarkessian's videos when he started making the documentary.[46]

Totally Not The Sarkeesian Effect[edit]

Aurini finally released Immersed in Subversion: Control the Culture, Control the Man (Davis Aurini's Sarkeesian Documentary)[47] direct to YouTube on 28 March 2016. He stresses[48] that this is totally not The Sarkeesian Effect or a version of it in any manner whatsoever, although it uses footage filmed for it (i.e., all the Aurini footage Jordan Owen cut out of his version). He still doesn't know how to record sound properly.

Davis later admitted, after spending a year and a half making a film about Sarkeesian, taking thousands of dollars in donations to do so and holding forth with his opinions of her opinions at length, that he had never watched any of Sarkeesian's videos through.[49] "If I had ever watched any of her fucking videos, I could have come up with a far tighter argument." Apparently she's too "toxic and pedantic".

Aurini then claimed that Sarkeesian was lying about her death threats because he had apparently contacted the San Francisco Police Department and asked for a case number and none was found;[50] this was proven wrong by an SFPD spokesperson who looked harder and found that Sarkeesian did indeed complain to them about death threats she'd received, numerous times, and the case had in fact been handed over to the FBI.[51]

When proven wrong, Aurini then went from point A to point U by going full conspiracy theory mode, spewing red herrings, that "this revelation about the FBI didn't answer all of our queries, rendering GamerGate nothing but a tinfoil-hat in neck-beard chic – quite the contrary, it compounded them!". Owen made a video that somehow managed to spin the story to make out that he was the true victim.[52]

Other contributions to human understanding[edit]