From RationalWiki
(Redirected from Furries)
Jump to navigation Jump to search

Photoshoot of the 2022 RationalWiki editors meetup

Furries, or more fully, the furry fandom is a general term referring to both a genre of art and literature (including comics) concerning anthropomorphic animals, and the fan culture that surrounds this genre. An enormous amount of variance applies to both applications of the term, both in degree and type.

The culture of the furry fandom is easily as diverse as its art. Ranging from people mildly interested in its concept to full lifestyle devotees and spiritual seekers, furries, as the fans are more commonly known, are difficult to easily define. In general, the one common feature among them is an interest in anthropomorphic art and concepts.

Furry art, as with art from any fandom, can range from the innocent to the perverted. This characteristic is also shared by the fans themselves, whose involvement can be very moderate, or stray deeper into more unusual fetishes and perversions. These latter tendencies have been commonly mocked in the media, and they certainly do exist, but are hardly representative of the fandom as a whole. However, there is a sexual tone to a lot of furry art, and a high incidence of both male and female bisexuality. To the uninitiated, and in some cases even to the well-experienced, these expressions can be quite shocking, and do serve to make large parts of the fandom difficult to access for some. However, knowing that, it is possible to avoid or at least minimize contact with these elements, and simply enjoy the fun.

There is also a high incidence of spiritual seekers within the fandom, ranging from those following New Agey shamanistic practices involving a belief in totem or power animals, to those attempting an ultimately futile pursuit of lycanthropy, to those who see their furry persona as a true representation of their ideal selves. Some, usually calling themselves "therians," believe that they have a spiritual, emotional or psychological connection to animals, or that they are an animal in human form. A common stereotype is that many furries are obese or have other body-related issues, and have adopted a furry persona as their ideal image of what they should look like, sometimes coming to believe they were "born into the wrong body." As with the sexual aspects of the fandom, this is just that, a stereotype, and it is unclear as to what extent this is actually the case; nonetheless, academics sometimes target furry convention attendees with surveys asking all the usual questions about their sexuality, spiritual beliefs, and body image and self image issues, much to the annoyance of those who are there to have fun or are just curious and checking the scene out.

Furry conventions, again much noted in the media, are somewhat a genre unto themselves. While these events are the largest and most organized in-person gatherings of furries, the convention-going members of the fandom still represent only a portion of the greater online furry community, with some furries preferring not to attend conventions and to keep their involvement to a smaller, local group or, more commonly, exclusively online.

As with the other aspects, a wide variety of expressions are noted, from the presence of actual artists to the phenomenon of fursuiting, which involves dressing in "anthro" costumes. Some costumes can be quite elaborate, using principles of animatronics to add movable eyes, jaws and other appendages. Again, a sexual aspect can also sometimes come into play, side-by-side with more innocent expressions. Tolerance is generally the order of the day, especially at conventions.

The primary medium of furry art is traditional (i.e. painting, etc.) or digital artwork, which as noted above varies in both style and content. The degree of anthropomorphization ranges from fully human with some slight animal characteristics, to fully animal but with human intelligence, a style generally referred to as "feral." The most common expressions involve more or less human forms, but with animal paws (or equivalent), heads and tails. As well, content varies considerably, from more innocent works to the startlingly perverse and/or offensive. At the latter end of the range, an "anything goes" attitude tends to pervade the fandom, although it is not by any means shared by all of its members.

A smaller, but still noticeable genre of amateur fiction has also revolved around these expressions, typically shared over the Internet, rather than any form of professional printing.

Comics, such as the seminal Albedo Anthropomorphics and the much more widely known Teenage Mutant Ninja Turtles have long involved furry characters, if not entirely furry casts. Less professional efforts appear regularly on the Internet, including a wide range of furry webcomics.

There is little film aimed directly at furries, though Zootopia seems to have been the first, with stories of a marketing firm contracted by Disney reaching out to furry groups asking them to post to Instagram with the movie hashtag in exchange for freebies,[2] although a great deal of anthropomorphic animation exists, much of which is well beloved by fans of the genre, including Secret of NIMH, Fritz the Cat, and Cats Don't Dance, as well as television shows, such as Chip 'n Dale Rescue Rangers, the various Sonic the Hedgehog shows, and My Little Pony: Friendship Is Magic.

The CBS television crime drama, CSI, has been known to indiscriminately kill furries.[3][4] 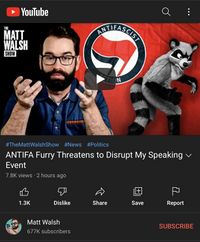 Fascists are not immune from them

As one might expect, a genre like furry does attract a large amount of controversy as its sexual aspect draws a lot of outside attention, especially when the more outre fetishes are taken into consideration. There have also been controversies within the community as to what limitations, if any, should be placed on furry artwork. Additionally, there was a group that decided to stand against the more outre aspects, calling themselves "Burned Fur" (circa 1998-2001) among those who wanted a fandom without any of the sexual or quasi-spiritual associations, but the group proved to be divisive and short-lived. In an ironic footnote, after the group disbanded, the abandoned domain name for their website was purchased by a porn merchandiser.

Some have accused fursuiters of dressing in costume in order to attract children, whom such displays have traditionally been aimed at. In a similar vein, the production of sexually-themed artwork based on characters from children's animation (Sonic the Hedgehog is one popular theme) is seen by some as an attempt to push sexuality onto children, even though such art normally isn't easily accessible to children. Other accusations, such as bestiality, have been leveled, due to the sexualization of animals, however altered from their base forms.

Members of the furry community feel that the overly sexual component gives the rest of them a bad reputation and may use the derogatory term 'furvert' to describe such people.[5] Avid watchers of Fox News are also called furverts. The amount of furries that are disappointed that, contrary to popular belief, Fox News has no actual foxes, remains unclear.

In all seriousness, an article[6] published by Oxford Journals stated that furries needed "unconditional acceptance and nonjudgmental treatment from their health care providers", adding:

"Furries perceive significant societal stigma due to a flood of negative media and ignorant, unfounded, assumptions about the group," Dr. Sharon E. Roberts, from Renison University College, University of Waterloo, Ontario, Canada, told Reuters Health by email. "The pervasiveness of these stereotypes leads many individuals, including professionals, to try and 'explain' furries through pathology (e.g., childhood trauma, sexual deviancy, psychological dysfunction)."
"The implications of our findings for medical professionals are rather simple," Dr. Roberts said. "If a person discloses that he or she has a furry identity, then professionals should not automatically assume that being part of the fandom has negative consequences for the patient. It may actually be the only source of positivity (and resilience) for the patient."[7]

In 2016, the International Anthropomorphic Research Project (IARP), a multidisciplinary team of scientists studying the furry fandom[8], issued a detailed report after five years of (very serious) research. The completed 174 page report, Fur Science!, was then published on their website.[9] Segments of the report's research received support from the Social Sciences and Humanities Research Council of Canada.

In early 2022, Facebook accounts ran by the Republican Party spread misinformation about public schools accommodating to students that identify with the fandom. This may partially have to do with the LGBT overlap the fandom is known for having.[10]

There are many furry sites, including a wiki called WikiFur.

Ever since the early 2000's, a hate circlejerk has been present across the internet, especially on influential websites such as Something Awful, Kiwi Farms, Encyclopedia Dramatica, Reddit, and most notably, 4chan. Some early examples include the "Yiff in Hell!" and "Kill it with Fire!" chants, but since those have become cliche'd to that point of mockery, newer semantics include baseless accusations of pedophilia and/or bestiality, asserting that they have the right to "hunt" them since "they identify as animals", references to Kero the Wolf and Rainfurrest 2015, LARPing as Medieval crusaders/animal controllers at conventions, etc.

If none of those methods work, they always have the option of telling them that they'll "never be a woman" or that they "need to stop forcing their sexuality on children". It's harmless fun, you guys! And definitely not at all projection of any kind of insecurity!

On 7 December 2014, the Hyatt Regency O’Hare hotel in Rosemont, Illinois was evacuated at around 1 AM after chlorine powder was found in the stairwell between the 9th and 10th floors. The hotel was hosting Midwest FurFest (MFF) at the time, and the attendees, some in full costume, were standing on the street outside the hotel until 4 AM. Nineteen fell ill from the fumes and had to be taken to a local hospital. All were later released. The police were reporting this chemical spill as a criminal act.[11][12] However, some in the media took this event less than seriously, considering the fact that many evacuated were adults dressed as animals...at 1 AM.[13][14]

One of the more unusual news events involving the fandom was when attendees of the 2016 VancouFur furry convention shared a hotel with a group of Syrian refugees. Convention organizers told attendees about the refugees, stating that they probably wouldn't want to interact with the "fursuiters". However, the children happily played with them for roughly an hour, and the event was covered by international news sources.[15][16][17][18]

On 17 January 2020, at the Further Confusion convention (FurCon) in San Jose, California, several convention attendees, some in costume, were taking in the night air in front of the San Jose Marriott hotel. It was then they heard calls for help coming from a nearby car on South Market Street. The woman driver was repeatedly shouting "Get out!" to her male passenger, who was assaulting her. Six of the furries, all in costume, ran to her aid, and extracted the attacker from the car, placing him under Citizen's Arrest. A video of the incident shows the man being restrained by two people, one dressed as a pink dinosaur, the other as a tiger. The attacker, identified as San Jose resident Demetri Hardnett, 22, was arrested and booked on suspicion of domestic violence. His victim was identified as his girlfriend. A news report stated that the arresting officer, San Jose Police Sgt. Enrique Garcia, said that the arrest report "did not detail the attire of the rescuers."[19][20][21]