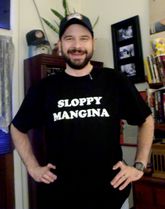 Well, at least he's honest! (but he thinks it's a sandwich)

Steve Shives is an atheist vlogger who has produced video series including "An Atheist Reads" and "Five Things" (previously Five Stupid Things). His videos deal with debunking conspiracy theories, pseudoscience, and assorted woo.

Shives has expressed vocal support for Atheism+, and he has argued that feminism should be more widely accepted in the atheist community. This position has unsurprisingly drawn sharp criticism from anti-feminists in the atheist YouTube community, including Armoured Skeptic, TheAmazingAtheist, and Sargon of Akkad.

Besides his YouTube channel, Shives used to occupy the Tuesday slot on the collective-run Breakfast Club channel until it was discontinued in October 2015.

He does a very good RP accent apart from completely forgetting the yod sound /j/ before certain vowels.[1]

Shives uses a block bot, with the goal of reducing the absurd amount of harassment in his feeds.[2][3] Realistically, this results in most people who try to tweet him being blocked by him, usually without their knowledge. Many people claim to have been blocked by Shives' account before having even heard his name, only discovering it when they looked him up for the first time.[4] The unusual zeal of Shives' block-bot is a frequent source of criticism against him.

Shives has been picked up by the Huffington Post a couple times for his opinions,[5][6][7] and once by Vice.[8]