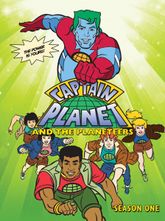 Captain Planet and the Planeteers was a cartoon series from the American animation revival of the early 1990s. It was created by Ted Turner

and originally broadcast on his syndicated cable channel TBS.

Gaia (Whoopi Goldberg or Margot Kidder), personification of the spirit of the Earth, musters a hard green carefully multicultural team of Planeteers, teenagers granted magic rings that give them superpowers based on the alchemical elements (plus one extra, just because). They are:

Each of the Planeteers has a variety of powers from their respective element based magic rings (freezing ray, fire manipulation, animal telepathy, etc.) which they can combine to summon Captain Planet (David Coburn)—a blue-skinned, green-mulleted environmental Übermensch. Captain Planet, more powerful than all of the Planeteers acting separately, possesses flight, super strength and basically any other superpower the writers need to fit the episode's plot. Despite his great strength, Captain Planet is not invincible; pollution and toxic waste are his Kryptonite, and he can be weakened by being doused in the stuff.[2] When Captain Planet has prevailed, he returns the powers to the five Planeteers with the slogan "The power is yours!"

While Captain Planet is typically only called when things become most dire for the Planeteers, nearly every episode features his eventual calling to dispose of the polluting malcontent, rescue the Planeteers and save the day, leading one to wonder: why don't the Planeteers just summon the Captain at the first sign of trouble?

Enlisting children in environmental causes has long been a project of the environmental movement.[3] On the other hand, actual environmental issues take place in a real world without superheroes. Captain Planet and the Planeteers could not fight real world polluters without potentially leading children to ask uncomfortable questions about Mom and Dad's jobs. That might lead to undesired blowback.

Instead of tackling the realities of these issues with nuance, many of the issues tackled in the show were a result of the superhero's rogues' gallery of villains, given obviously evil names like "Hoggish Greedly", "Verminous Skumm", "Duke Nukem" (no, no that one), and "Dr. Blight". Even if some of them had motives as profit or mere short-sightedness, most of these "Eco-Villains" enjoyed the environmental destruction they caused for its own sake, along with allegorically representing eco-vices like greed, poor sanitation, and mad science. True to the superhero genre, Captain Planet's triumphs over all of these Eco-Villains were both guaranteed and complete but disconcertingly temporary.

Other cartoons, from the 1955 short Goofy Gophers and the Lumberjerks[3] to Hayao Miyazake's Princess Mononoke (1997)[4] have dealt with environmental issues in a more nuanced manner that eschews polluters marring nature from sheer meanness. But nuance is overrated. At its best, Captain Planet becomes hilarious by its relentless bludgeoning message.

Ted Turner, like many others in the 1970s and 1980s, had an abiding dislike of nuclear energy. He puts forward this point of view in episodes like Meltdown Syndrome. Another issue dealt with is overpopulation and the importance of birth control, ironic considering that Turner himself has 5 children.

Some episodes veered away from environmental themes, to the sorts of sermons that were a mainstay of 1990s children's programming. The second season episode Mind Pollution is standard anti-drug propaganda remote from environmental concerns. Street gangs and their alleged evils, none of which loom large as environmental problems, were the subject matter of no less than four episodes.[5] The episode A Formula for Hate is not focused on environmental themes, but at least seeks to calm fears about the contagiousness of AIDS. The If It's Doomsday, This Must Be Belfast episode features nukes being given to opposing sides of the Israel-Palestine conflict, apartheid-era South Africa, and The Troubles (who have infamously bad accents) in service of a "can't we all just get all along?" message. There is also a hilarious episode called A Good Bomb Is Hard to Find where the Planeteers go back in time and encounter Hitler, and his hate is so powerful, it counts as pollution. No, seriously.