From RationalWiki
Jump to navigation Jump to search
This is about the experiment on Nazism. For the feminist movement which opponents sometimes claim is Nazi, see third wave feminism. 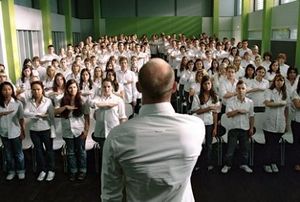 inspired by the events of the experiment.

The Third Wave was an experiment in 1967 that purported to show how people were willing to accept the Nazi regime, with the belief that it gives you a purpose you didn't have before.[1] The guy who started the experiment ended it after it grew immensely beyond its intended scale, swelling from the 30 students in the class to over 200 throughout the school week,[1] many of whom cut classes to participate.[1] One other result is that the teacher who experimented began to enjoy the power.[1] Ron Jones (1941–), who created the experiment, says he regrets it to this day.

History teacher Ron Jones of Ellwood P. Cubberley High School (Palo Alto, California), was questioned by one student how the Germans were willing to ignore the atrocities while under the Nazi regime. This question inspired him to create an experiment that he felt would show how easily people would give up their individuality to feel included.[1] The revolutionary counterculture of the 1960s made it a great time to test it out.

Day one: Strength through discipline[edit]

The experiment began with the introduction of "strength through discipline". A "seating posture" was introduced, which after testing, only took the class five seconds to get into the position. To see how far they would go, he introduced the new rules of "Students must be sitting in class at the attention position before the late bell; all students must carry pencils and paper for note-taking; when asking or answering questions a student must stand at the side of their desk; the first word given in answering or asking a question is 'Mr. Jones.'; short 'silent reading' sessions." None of this became unacceptable to the students.[1]

On the third day, the class started with 43 students instead of 30. Almost one-third of the students had cut class to attend this. Membership went to every student who wanted to remain in the experiment. None decided to leave. Three were assigned to report any members not complying with the rules imposed. He then described how the first two mottos were meaningless without action. "Action" means doing anything for your allies. The students began excelling at academics due to pure devotion. Each student got a special assignment to feel important. However, about twenty students had reported members to him for violating the Wave's rules, even though only three had the assignment to do this. Finally, a process for joining got set up. Any new member had to be recommended by an existing one and given a membership card by him. By the end of the day, membership had surpassed 200. One well-built student even volunteered to be his bodyguard because he feared something would happen to him and followed him everywhere in school.[1]

Eighty students attended the class that day, meaning that less than half the students were there just two days earlier. Jones felt he had effectively become a dictator and was slowly ending the experiment; it was beginning to disrupt the entire school. As the movement increased in scale, Jones decided to tell the members that they were one of over a thousand similar groups throughout the country as part of the nonexistent larger Third Wave movement.[1] He would unveil a presidential candidate the next day at a secret rally in a small auditorium, and nobody outside the Third Wave was to know of it.[1]

The auditorium filled to the brim; every seat held a student. A small TV set for everyone to see was in the front. After a few minutes of white noise, everyone was surprised that nothing still happened. Jones revealed that it was all fake and claimed that this showed that the students were no better than the Nazis, having fallen victim to the same fate.[1] A rear screen projector switched on, showing the Nuremberg Rally.[1] Everyone in the room was shocked, and some were crying. The Third Wave had become everything to many of them.

Jones was fired a year later for unrelated reasons.[2] He never heard anyone mention this for the rest of his teaching career at the school, which he interpreted as meaning that everyone was too ashamed to admit they participated in this.[1]

Jones meant this experiment to demonstrate how people's desire to be part of something bigger can manipulate them into joining dangerous movements, such as fascism, Nazism, and cults, both religious and personalistic.

Our desire to be included overrules our logical thought processes, making our entire species a target for members of it that wish to exploit this. Everyone wants to fit in somewhere, anywhere, which would explain why some spend so much time trying to find people to whom they can relate their lives. It's how populist movements grow. They appeal to our desires we didn't even know existed. In essence, anyone can fall to those who want them to under the right conditions. Humans are fragile creatures, and this can turn for better or worse. Often, leaders fall victim to their own propaganda, as Jones later admitted he liked that all the students were following him.

The teacher got away with experimenting on 200 students and burdening those students with a secret for life. He manipulated 200 students into joining his "Third Wave" group. Somehow, no student reported to be damaged by the "Third Wave" experiment.[3] Ron Jones is praised by parents and staff for being a really good teacher.[3] All goes to show that dictators rarely get punished for their actions.