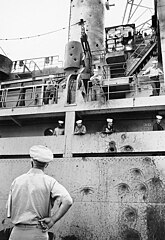 Damage to the USS Liberty

The USS Liberty incident occurred on June 8th, 1967, during the Six-Day War,

when Israel's navy and air force attacked the United States signal intelligence gathering vessel USS Liberty, killing 34, wounding 171, and severely damaging the ship.[1] Controversy remains whether the attack was a deliberate effort to disable a neutral spy ship "technical research" ship in international waters, or an unfortunate case of mistaken identity in the fog of war.[2]

Since the US and Israel were nominal allies in the cold war, both parties had motives for glossing over the incident as an unfortunate accident, a result of miscommunication in the midst of a hot war with numerous rapidly shifting threats. For example, the day before the attack on the Liberty, Israeli aircraft bombed one of their own armored columns south of the West Bank town of Jenin.[3] In that context, subsequent inquiries have suffered from what may be politely called a systemic bias. From the Israeli perspective, a proper investigation would've revealed either rank incompetence or a deliberate attack on an ally, while for the Americans, the investigation would've required them to reveal just what the Liberty was doing in that region.

The event, or rather its alleged investigation, has been regularly contrasted with the first-hand accounts of eyewitnesses. Occasionally, cognitive dissonance arises when additional testimony becomes declassified[4] which does not conform to the official "accident" narrative.

Why won't everyone shut up and buy the official version?[edit]

Those insisting that Israel did not know they were attacking an American ship focus on a lack of apparent motive.[5] One credible narrative is a cover-up of a POW massacre by the Israelis at El-Arish.[6] Another explanation is that the Israelis simply did not want a sea-going antenna farm cruising where it could hear their aircraft dispatchers. In any event, a better question is: after the fact, whose interest would be served by an ugly truth when a pretty lie could be reported?

That said, when some people claim the tinfoil hats are being worn by Secretary of State Dean Rusk . . .