From RationalWiki
(Redirected from SS)
Jump to navigation Jump to search

The runes of the SS, seen on collar patches and the side of helmets.

The Waffen-SS ("armed-SS") was the military arm of the Nazi Party's Schutzstaffel ("protection staff"), or SS. Originally it was a small group of party loyalists and hitmen, but after Hitler's takeover of Germany in 1933, it grew until it was a major military force of its own. The Schutzstaffel as a whole was commanded by the Reichsführer-SS; for the vast majority of its history, this rank was held by Heinrich Himmler,[2] the man who in large part planned and executed the Holocaust.[3]

Membership of the SS was originally restricted to those of "Aryan" blood,[4] but the pressures of wartime convinced the Nazis to conscript foreigners from occupied nations.[5] The Waffen-SS was responsible for numerous wartime atrocities, including torture,[6] human experimentation,[7][8] kidnapping of children,[9] mass rape,[10] child sexual abuse,[11] and, of course, mass murder.[12][13] The Waffen-SS was rightfully declared a criminal organization at the Nuremberg trials.[14]

The SS was originally formed as a special protection guard for Hitler at large party rallies. The SA (Sturmabteilung or "Assault section", nicknamed "Brownshirts" due to their uniforms) was the Nazi Party's own paramilitary force, and the SS fell under their umbrella. However, in the Night of the Long Knives,

the SS assisted in the murder and arrests of the SA's leadership, and the SS was formally separated from the SA. SA Stabschef Ernst Röhm was executed by SS-Brigadeführer Theodor Eicke in a prison cell in Munich, thus eliminating the supposed "plotter" against Hitler. The SS and their commander Heinrich Himmler finally had the power to expand past being mere bodyguards. In 1934 a small armed force called the SS-Verfügungstruppe ("Disposition Troop"), or SS-VT for short was formed; the rest of the SS became known as the Allgemeine-SS ("general-SS"). Over the next several years the SS-VT had expanded to having several divisions of soldiers and even tanks.[15] Hitler renamed the SS-VT the "Waffen-SS" in the summer of 1940 and its command was subsequently reorganized.

The overall SS became one of the largest and most powerful agencies of the Nazi regime. In 1934, the Gestapo as well as most other police agencies fell under the SS's umbrella, and the SS became the primary agency for internal security. In this capacity, the SS controlled all of Germany's police and secret police, and ensured Hitler's domination of Germany would remain unchallenged. Additionally, the SS was largely responsible for carrying out most of Nazi Germany's atrocities, including the Holocaust. When Germany conquered its neighbors during World War II, special SS "Einsatzgruppen 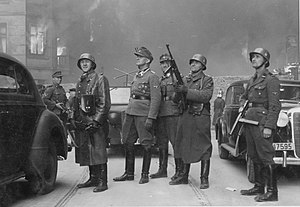 By 1943 the Waffen-SS accounted for more than ten percent of total German military strength and 25 percent of their tank strength. They were the elite of the German war machine, and they were rushed from one crisis to another much like a bathtub plug. They were embroiled in war with the Soviets on the Eastern Front, and they fought in all the most decisive battles of the war. Interestingly, Hitler's delaying of the deployment of an elite SS armored division (12th SS Panzer Division Hitlerjugend) near Normandy probably contributed to the success of the Allied assault there in June 1944.

Probably the most interesting part of the SS was that despite being the most 'Aryan' of the Nazis, they recruited heavily from the "inferior" peoples. By far the largest contingent in the SS were Slavic Ukrainians, with over 100,000 soldiers in the SS. The SS first tried to recruit from 'Germanic' non-Germans, like the Dutch, Norwegians, Swedes, Finns, Estonians, Flemish, and Swiss, but when that proved insufficient, they moved on to 'Non-Germanic' Aryans like the French, Waloons, Italians, Spanish, and Hungarians. Then, not even out of desperation, they formed SS divisions out of the aforementioned Ukrainians, Cossacks, Lithuanians, Latvians, Tatars, Bosniaks, Croats, and there were even Indians, Africans, and Arabs who served willingly in the SS in the hope that the Germans would free them from the British or the French.[16] The willingness of these groups to join is best explained by wanting the raw power of the Axis to settle local disputes in their favor—the Baltic groups and Ukrainians wanted independence from the Soviets (though given what we know about Generalplan Ost that would not have gone well) while Bosniaks and Croats had a grudge to settle with Serbs over ethic Serbian dominance in royal Yugoslavia. 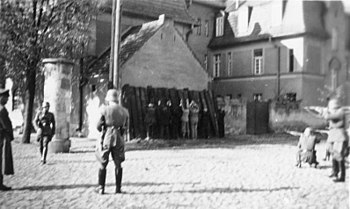 The SS is known for being one of the most brutal of the Nazi fighting organizations, and they certainly were; however the atrocities of the combat divisions are comparatively low to those of the SS Police, SS-Einsatzgruppen, and the SS concentration guards. All the SS Police were good for was killing innocent civilians, and so were the Einsatzgruppen, although they were much better at it. The Einsatzgruppen was formed with the sole purpose of killing Jews and Communists in Russia, and they did it with an efficient brutality. They killed approximately 3 million unarmed people, mostly with machine guns. And the atrocities of the concentration camp guards need not be mentioned.

Nevertheless, the Waffen-SS still committed numerous atrocities, mainly massacres of POWs, and much of their reputation as "honorable" warriors concerned only with patriotic duty is a result of historical revisionism. Indeed, the Waffen-SS veterans group HIAG

Although most of the SS were Christians, the religion promoted by Himmler was a warped form of German nationalist occultism. He thought that this would awake the "warrior spirit" in his men as they sacked Russia much as the Vikings had done a thousand years earlier. Himmler was also a big fan of Islam due to its promotion of the Jihad and hatred of Judaism.

Although the SS hierarchy discouraged membership of churches and/or any organized religion, due to wanting the full 100% allegiance of its members, atheism was officially banned as Himmler saw it as a form of "self worship". All members had to swear an oath, which is best left uncommented:

"What is your oath?" "I vow to you, Adolf Hitler, as Führer and chancellor of the German Reich loyalty and bravery. I vow to you and to the leaders that you set for me, absolute allegiance until death. So help me God !" "So you believe in a God ?" - "Yes, I believe in a Lord God." "What do you think about a man who does not believe in a God ?" - "I think he is arrogant, megalomaniacal and stupid; he is not eligible for us."

Note that people took an oath seriously at the time.