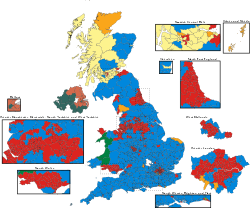 The 2017 UK general election was announced by Prime Minister Theresa May after saying she wasn't calling a snap election. [2] Seven months after David Cameron, the previous Prime Minister, tried to win back UKIP voters with a referendum and got more than he bargained for. Disgraced, Cameron resigned, and (then) Home Secretary Theresa May succeeded him. Seeing her parliamentary majority, May then attempted to push for a larger majority for Brexit negotiations. She needed the consent of two-thirds of Parliament to trigger a snap election. Jeremy Corbyn, Leader of the Opposition, surprisingly agreed to her request causing collective panic.[3] Bring on the obligatory pictures of politicians eating "commoner food"![4]

But then, in a shock, it turns out Corbyn had the right idea after all. Theresa May likes her parliament the same way she likes her men: Well-hung.[5] Tory Remainers must be seething right now.

It should have been a slam dunk for the Tories. Labour under Corbyn were disunited and unelectable to many.[6] It's easy to see why she'd push for a snap election; She'd get an extra two years, while Labour would be "in chaos". The likelihood of the Conservatives thrashing the opposition would have been very good politically. Other motives include:

Neither party even had time to prepare a manifesto.[10] Why state your own policies when you can sling shit at other parties![11] The Libertarian Party had one ready, though:

LPUK stands for lower taxes for both individuals and companies, small government, free speech and individual responsibility. We support free trade and free enterprise whilst believing that people should make their own choices and not rely on the government. We support a withdrawal from the European Union and a return to the free trade agreements that it was founded on. — Sounds familiar.[12]

Conservatives on the Issues[edit] 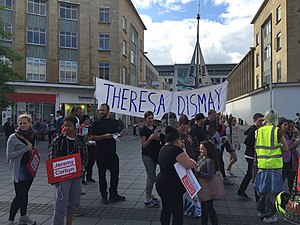 This is a great opportunity for Tory MPs to earn some money creating companies related to healthcare, buying stock in private healthcare companies or just getting money under the table from said companies.[14][15]

The social care policy was an attempt by David Cameron to alleviate the looming social care crisis, i.e. the biggest domestic issue facing this country. Clearly it was a waste of time, and it's much easier to just buy peoples' votes.[22]

May is offering a vision: One nation conservatism, British unionism, controlling immigration, clamping down on the excesses of political correctness, reintroducing grammar schools, skeptical of globalism, openly championing values and traditions the left thinks of as antiquated or conservative but are in reality mainstream sentiments in the UK.[31]

The progressives have put a candidate up to no avail at every election since the 1990s. It's always been the same group (Abbott, Corbyn, McDonnell et al.), and who's chosen has always been completely arbitrary.

People are reacting to the centrism of the Blair years, which we see with the rise of Corbyn, SNP and UKIP respectively.

DUP made their name on being "hard men" for their communities during the Troubles. Fortunately, there appears to be a wave of next-gen candidates in all the parties—even Sinn Fein and the DUP.[50] (They really do need Foster, Adams, Kelly, Wilson, Robinson, and Campbell to push off, though.)[51]

Green Party of England and Wales[edit]

Due to the Green Party's dislike of singular leaders, it is represented by two.

Lib Dem MPs could fit inside a Smart Car. They collapsed at the 2015 general election, in part thanks to their coalition with the Conservatives. (see Top 10 Anime Betrayals)

Plaid is egalitarian, distancing themselves from Tory-Labour "working-class" rhetoric. Funnily, Lib Dems are not as popular in Wales.

Being Irish, a lot of lefties feel trepidacious about voting Sinn Féin due to their history with the IRA.

The left-wing party in Northern Ireland whose baggage don't tick.

UKIP is anti-immigrant, anti-trade union, and more countryside conservative. Anti-immigration appeals to unemployed people and some unions, though.

This lady's not for turning up[edit]

UK debates are a fairly recent thing, and May was far from the first candidate to run a "doorstep" campaign. Overall it's a different, and often much more opaque, political culture.[88] All she needed to do is not talk.

There was one between various party leaders. Corbyn turned up at the last moment, unprepared (perhaps thinking the other lefties would give him an easy ride), and May sent over her Home Secretary, Amber Rudd; which just made her look worse. (Rudd's father died just 48 hours prior.)[89]

They we had a… well, not a debate, but a thing… It was two Jeremy Paxman interviews back-to-back, rather than a head-to-head debate. Paxman focused on personal attacks on Corbyn—none of which were new, and none of which he answered differently[90] (and Corbyn rekt him a few times too)[91]—and very little on policy. They also avoided NHS and social care for May, and instead played a round of Deal or No Deal.[92] The audience laughed at May a few times.[93][94] A clear win for... Andrew Neil over Paxman.[95]

Her charm, if we can call it that, did more to whittle down the Tories' lead from 20-25% to single figures in a matter of weeks. Even hapless performances from Labour politicians like Diane Abbott had little effect. Remember, Clinton '16 was never at any point that far ahead nationwide as the Tories were when the snap election was called.

Theresa May announcing after the election that she would not resign. Frankly, she would've saved herself a lot of pain.

What should have been the biggest electoral washout for the Conservatives since Margaret Thatcher became one of the most pyrrhic victories for the Tories ever recorded in modern history, single-handedly setting them back seven years. Many are now questioning why May even bothered to call for a snap election.[96] Her 24-point lead dwindled into single digits within two weeks, leading to a Brexit trainwreck and a zombie Prime Minister.[97] Meanwhile, the "unelectable" Corbyn demolished all expectations and got a net gain of seats, in some seats that were deep blue for decades, even in one case a century. The 2017 snap election marked the first election in twenty years since Labour made a net gain in terms of seats.[98]

Sad to see the back of Clegg (in favor of a wingnut).[99] Lib Dems ran on being the ones who would undo, or redo, the EU referendum, and they've only gotten 6 seats for their troubles. Delightful to see the back of Alex Salmond, less sop that it was (again, to another wingnut).[100] Everyone knew the SNP were going to lose seats, but none of the polls predicted them losing 22 seats. Labour cannibalised their votes and let the Tories in. (Thanks, FPTP.) Not good for Indy...but maybe good for the UK.[101]

This remains a huge cock-up by the Tories: the whole point of a snap election was to "crush the saboteurs"[102] and deliver the overwhelming mandate they supposedly need to push through Brexit. Instead the country will be every bit as divided as before.

The Tories and DUP combined will have a majority if they form a coalition together.[103] DUP are already outlining terms for soft Brexit as price for propping up the enfeebled Tories. A ~10 seat party. Let that sink in.[104] DUP likes Boris Johnson,[105] so one wagers he'll be vying for leadership.

May now has to govern in a confidence-and-supply deal with the Democratic Unionist Party.[106] Remember all that worry about Ulster breaking away from the UK because of Brexit? Now that she's in a coalition with a Northern Irish party, her "red, white and blue" Brexit looks a little less secure. And the best part? Her own Cabinet is threatening mutiny if she waters down Brexit, which is what DUP wants.[107] If she wants to govern, she needs to have the Unionists' MPs, which means watering down Brexit. If she wants to stay in office, she needs the support of her Cabinet and Party, which means staying the course. Both of those possibilities assume, of course, that she doesn't resign in disgrace, tail between her legs.[108]

A mandate from the people would have convinced the Europeans that Brexit is inevitable. Now the Europeans have reason to doubt May's resolve, not to mention her ability as a politician. May still wanted access to the European market while contributing nothing to the Union. After the results, the Europeans are unlikely to give this to her. If her own Party starts revolting, why should Donald Tusk listen to her?