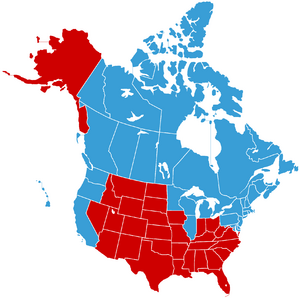 Jesusland is shown in red; the United States of Canada in blue. 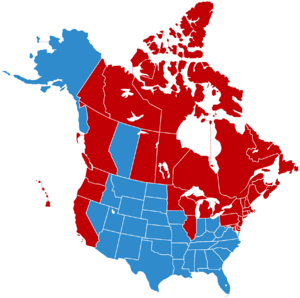 Map adapted for Canucks. Jesusland is shown in blue; the United States of Canada in red. Notably, Alberta has been integrated within Jesusland. 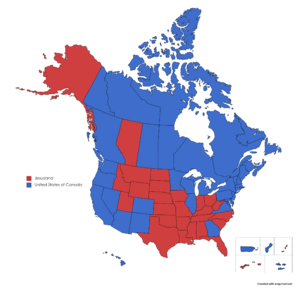 A more up-to-date map. Fortunately, Jesusland has lost a bit of territory for now.

Jesusland is Jesus's Own Country. Y'all come back now, y'hear? Jesusland, or more derogatorily known as Dumbfuckistan, is the name for the 31 U.S. states which voted for George W. Bush in 2004 (or the states that voted for Donald Trump in 2020), and sometimes, depending on whom you ask, the Canadian province of Alberta. The name came about after a post-election map showed that the states (excluding Alaska) formed a contiguous block. The name "Jesusland" was invented to describe the area, to fit the view of it as having an overly fundamentalist population. Which, of course, it does. It is the legendary "Real America" sought after by Sarah Palin.

Jesusland is flat, except where it is bumpy with mountains, with a climate that has never changed since its creation in 4004 BCE (see below). Its main life forms are corn, cattle, and hogs. The capital city is Crawford, Texas - the birthplace of George W. Bush. The country is sometimes referred to as "Dumbfuckistan", but not by its residents.

The cities of Sodom and Gomorrah have incorporated themselves into a single larger city: Las Vegas, Nevada.

Jesusland is home to a very Diverse population of different subspecies. These species all fall under the genus commonly referred to as Dickus Neanderthals, who are commonly found grazing around in the fields, complaining about them there Minorities. The primary diet of these Very fine people is Fake news, Chick-fil-a [2], squirrels, and of course manly grilled food. They reproduce via Incest, as normal sex would result in normal people. The subspecies Dickus Confederatus are the Confederate flag wavin' knuckleheads who unironically think the south will rise again (It won't). These people are born with mullets, have a disturbing toothless smile, and speak with an unintelligible accent. Fossilized records show that both their family and evolutionary trees are Venn Diagrams.

In his short story collection Knockemstiff, Donald Ray Pollack described a typical summer evening in his hometown east of Cincinnati as being "as hot as a fat woman's box." Fortunately the climate there never changes, and even if it did change, it's totally natural, and even if it's not natural, there's nothing we can do about it.

God sends lots of tornadoes and hurricanes in Jesusland to test the faith of believers and/or to smite dirty sinners.

Seriously, with all the wrath-of-God weather in Jesusland, you'd think that the God-fearin' people there would ask themselves which sins they are committing to piss off The Big Guy.

God gave Jesusland to the saintly whites, who adopted the Bible as their constitution. Then they grew lots of cotton and corn. In order to keep themselves pure in the sight of God, they are only allowed to marry their own relatives (although anyone of European descent will do in a pinch). Jesuslanders have a varied diet, including corn pone, corn grits, corn on the cob, corn dogs, and cornburgers, all washed down with high-fructose corn syrup soda and corn squeezin's (or moonshine). Jesusland also has a staggeringly high rate of methamphetamine and Oxycontin use, along with a surprisingly high tendency to view pornography, including the gay varieties.

Jesusland has a diverse economy, based on the Reaganomic principle. Its main exports are corn, religious zealots, and holy crusaders to go pacify the infidel states. One of Jesusland's main natural resources is rich, overweight white men in cowboy hats.

The main religion in Jesusland is Reaganism, unsurprisingly, although in recent years it has been replaced with Trumpism and QAnon.

Jesusland is home to a unique breed of American literature. Read enough Jesusland literature and you will think that . . .

If art wasn't imitating life, Jesuslanders might have a real complaint about how they are portrayed in books, movies, TV, etc.

Among those who have contributed to the image of Jesusland are:

More pop culture than pure literature. However, they too have had their influence:

See Literature, except with the addition of 'woke up this morning' at the beginning.

Mexico lies to the south, and the United States of Logic and Reason to the west, north and northeast.

Despite the political coloration of the map on this page, as global warming continues, many of the so-called red states on the Jesusland Map will become blue one way or another.

Residents of Jesusland are 3 times more likely to die from COVID-19 than in the United States of Canada, because of the misinformation spread by leaders and high profile figures in the country. The misinformation results in lower vaccination rates and laxer public health measures as compared to the United States of Canada, resulting in more folks catchin', spreadin' and croakin' from COVID-19.[4]

Although Jesusland sounds like a snarky nickname that some blue state liberal devised, it may have actually originated among the region's indigenous bible thumpers. In the first chapter of her memoir Jesus Land, journalist Julia Scheeres describes what happened to her family after they moved to rural Indiana when she was sixteen.[note 1] A few days after arriving, she and her brother were riding their bicycles down one of the country roads near their house when they came across a group of signs that a farmer had erected in his field:[5]

Jesusland has a diverse economy, based on the taxes of the sinners of the non-Jesus states.[6][7]