Flag of the Romani people, featuring the red cartwheel, a homage to India, from where much of their culture and religion originate.[1]

Antiziganism, also referred to as anti-Romanyism or anti-gypsyism, is a form of racism directed against Roma, Sinti, nomadic and Yenish people that were stigmatized as "Gypsies" in wider society.[3] Also known as Romanis (not to be confused with Romanians, citizens of Romania) or Roma people, they are perhaps one of the most persecuted peoples of this planet.[4] Along with Jews, they were victims of a genocide that is lesser known than the Holocaust but just as real and cruelly perpetrated by the Nazis: the Porajmos (Romani, lit.: "the Devouring"). While it is good and necessary that the Holocaust is taught and talked about in mainstream media to demonstrate the consequences of generational hatred against Jews, unfortunately the fate of millions of Romanis exterminated by the Nazis does not receive as much attention that it deserves.

Commonly known as "Gypsies", the term is considered offensive and inaccurate, hence it's a racial slur not to be used in ANY context.[5][6] This is due to the fact that it is derived from the conception that Romanis originated from Egypt (Romanis are Indo-European, from Northern India[6]) and that the term is associated with criminality and foul behavior, a stereotype that hurts the Roma people within the society we live in. The stereotype of Romanis includes traits such as:

The Romani genocide, also referred to as the Romani Holocaust, the Parajmos (coined by American activist Ian Hancock in the early 1990s),[9] and the Samudaripen (initially conceived in 1970s Yugoslavia and recommended by French linguist Marcel Courthiade), was the targeted and systemic extermination of Romani people under the Nazi Regime and its WWII Axis allies. Both Jewish people and Romani people were conceived as an "alien race" by the Nazis and such both of these groups were targeted and murdered by the National Socialists. Sometimes the eugenocide[note 1] of Romani people (especially Sinti people) were included in lessons concerning the Holocaust, while some interest groups discarded the idea that Romani people were targeted by Hitler; something which research has long been disproven.[9] Hitler, as part of this set of "racial hygiene" policies, ordered the mass sterilization of Romani people and later would execute them in mass.[4] Although Jewish survivors and their family members were eligible for reparations and received those for the horrific crimes by Nazism, the same right was denied to the victims of the Porajmos right after 1945.[10] The plight of the Romani people as part of "The Final Solution" for some reason wasn't in the interests of the victorious powers of WW2 and thus, the "best deal" Romani people have gotten was to be recognized as "victims of fascism", despite the vocal outcry by activists and defendants. In a 2013 survey by the German anti-discrimination bureau, around 19% of those asked said they didn't know that the Roma and Sinti people were persecuted and murdered by the Nazis.[11] 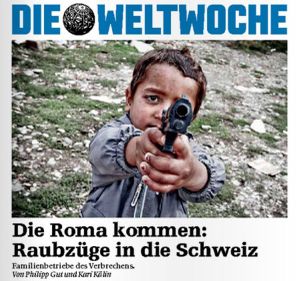 Swiss right-wing newspaper Die Weltwoche:
"The Roma are coming: Robberies in Switzerland". Someone might say that this is racist fearmongering?

On 5 February 1995, Franz Fuchs killed four Romani people in Austria with a pipe bomb. It was the worst far-right terrorist attack in Austria. Although Brenton Tarrant targeted Muslims (51 killed), Romanis were mentioned in the eco-fascist manifesto "The Great Replacement" by the Neo-Nazi murderer, stating: "The invaders must be removed from European soil, regardless from where they came or when they came. Roma, African, Indian, Turkish, Semitic or other. If they are not of our people, they must be removed".[14] Three victims of the Hanau shootings 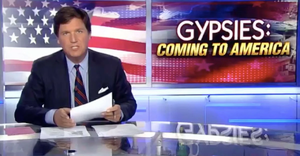 Fox News Hatemongerer Tucker Carlson on his White Power Hour (also known as Tucker Carlson Tonight), in "Scary Outgroup, Coming to America". Reminder: That's the cover of a story of 40 Romani refugees in Pennsylvania, not 40 billion.

While things are better in the US, they are far from perfect. For the most part, if there's a relative lack of Antiziganism in the US it's because people are unaware that "Romani" is even a group,[16] and they were usually left alone. However in July 2017, lacking enough problems to stir up, several right-wing media outlets perpetuated racist stereotypes and lies about 40 Romani asylum seekers in California, a borough in Washington County, Pennsylvania. Originally escaping racism from Bucharest, Romania, they hoped for a better future in the "land of the free", going through Immigration and Customs Enforcement (ICE), an institution not known for being lenient or xenophilic. Based on reports by the Pittsburgh Post-Gazette, titled "Romanians seeking asylum are in California, Pa. as part of U.S. Immigration program.", right-wing media jumped on the opportunity to demonize this small group of people.[7]

"Well, in the last two months, several dozen Roma, more commonly known as “Gypsies” have been settled in California, Pennsylvania, by the federal government. The Roma are seeking asylum saying they suffered racism in their native Romania. Integration is not going well. According to residents, they have little regard either for the law or public decency. Citizens say they defecate in public, chop the heads off chickens, leave trash everywhere and more."[7]