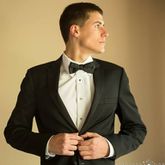 Austin Ryan Steinbart (c. 1991–), also known as Baby Q and Q+, is an IT professional living in Arizona, who in 2020 announced that he is "Q", the leader of the QAnon movement. Well, to be more accurate, he claims that Q is himself living decades in the future and is posting back in time via "quantum computing". And, the rest of the story just gets crazier from there. At the end of the day, Steinbart claims to be running the QAnon operation, but he's also currently in federal custody for violating the terms of his pretrial release for the charge extorting an IT company.[1][2]

Steinbart has only managed to convince a small faction of the QAnon movement that he is their rightful leader, so he's less of a Martin Luther and more of a Joseph Smith, with the legal difficulties to boot (but just one wife... for now).

Steinbart's website[3] has a very helpful timeline of his life and career. Here's the basic summary of his claims.

Due to the nature of how IT professionals are assigned jobs from vendors, Austin was able to successfully infiltrate a number of different large hotel chains, including: Marriott, Hilton, Embassy Suites, Hamilton Inn and La Quinta. Using a number of spying "sniffer" gadgets, affectionately called "raspberry pies" (Pine 64), he began to build the data-backbone of one tentacle of the vicious child-trafficking operation in the United States, monitoring the activity of websites such as the infamous "Backpage", the owners of which are now behind bars.

By early 2020, Steinbart had already built up an online following for his writings and videos about QAnon and various conspiracy topics, before announcing that he himself (well, technically his future self) is Q. During this period, he began displaying increasingly erratic behavior, and claiming illegal activities, while stating that due to his status as an "off-books agent" for the Defense Intelligence Agency, he was immune to arrest.Do You Believe That? And then he was arrested by the FBI — oopsie![11]

To make a very long story short, Steinbart had gone to an imaging clinic in Los Angeles to get his brain scanned, "at his parents' request", probably because he was acting sufficiently nutter-butters that a check of the ol' gulliver was warranted. While at the clinic, he used his actual 1337 haxxor skillz to access the private medical records of various celebrities, particularly former NFL players, video-recorded himself doing so, and uploaded them to his website. The clinic found out about this and sent him an email asking him to take the videos down, to which Steinbart sent them a reply threatening "NUCLEAR ARMAGEDDON". So the clinic contacted the FBI, who knocked on Steinbart's door (which he answered with a Desert Eagle pistol in hand, for which he was not murdered because he's a middle class white guy), and politely asked him to take the video down.[11]

For any sane person, that would be a great time to do as you're told and lay low for a while, but this is Austin Steinbart, so of course two days later he tells his online followers to barrage his website provider with calls and emails to overload their customer service system to force them to put the videos back up. Note that Steinbart supporters have claimed that he simply called for a letter-writing campaign, such as an activist group might do to call for to pressure a company to change policy, which is belied by Steinbart's tweeting Datto's CEO "I am running a military intelligence operation for the Defense Intelligence Agency called Operation QAnon… There is a VERY good chance I will send some PSYCHOS to come see you in person!" So the FBI makes a second trip on 31 March 2020 and arrested him for extortion.[11]

Steinbart continued to show little to no chill, but was somehow allowed to go home on house arrest, while forbidden from accessing the internet or having smart devices. He then decided the best way to show cooperation was to use a flip-phone to call into YouTube conspiracy shows as a guest star, including noted scam site (and suspected foreign disinformation operation) Veterans Today[12], a move which surely had his lawyer chugging bourbon with Pepto-Bismol. Steinbart eventually got his internet privileges back, and as summer passed into autumn he'd segued into his Jim Jones/Charles Manson phase and had a gaggle of followers crashing at his house in Scottsdale to venerate him and make a movie about him. But every Jesus has his Judas, and a disaffected Steinbartist bailed on the commune and informed the feds that Steinbart was smoking cannabis while on home release. The FBI dropped by, found Steinbart had a "Whizzinator" plastic wang full of fake pee at his house (presumably so as to cheat on the court mandated drug test). So as of September 2020, the Prophet is back in jail.[13]

In mid-2020, Steinbart announced that he'd be releasing a film about his work as Q, as covert agents generally do. He began recruiting folks with media skills to provide free labor for him, in some cases having them join his commune in his suburban home. The trailer was a cringe-fest, basically just stolen news footage punctuated by footage of Steinbart in a James Bond tuxedo smirking at the camera, and for some reason playing Jenga.[14]

The announcement that the project has been put on hiatus is arguably the greatest such announcement in cinematic history:

As anyone tracking the QAnon movement knows, "Q proofs" are fundamental to the Q-cult. Basically they're "coincidences" that prove Q is in communication with President Trump, has insider information, etc. The Steinbart sect has their own sub-set of "Austin Q-proofs" which are somehow even *less* plausible, and sadder, than the regular ones.