A Black Helicopter spying on RationalWiki

Not to be confused with the Attack helicopter or Free helicopter rides memes.

Black helicopters are to the 1990s what snake oil was to the age of traveling salesmen pushing patent medicines, in that it is an example of a term that was seriously used by proponents but was so preposterous that the term took on a life of its own as a means of ridicule.

Helicopters and tanks such as these were used by Pharaoh to terrorize the Ancient Egyptian population.

Allegedly, the United States government and/or the United Nations were preparing fleets of unmarked black helicopters which were to become the means of military occupation of the United States in the name of the New World Order. This was first seriously proposed by Mark "from Michigan" Koernke and Linda Thompson circa 1993-1994 in their videos America Under Siege (Thompson) and America In Peril (Koernke). The book Black Helicopters Over America by Jim Keith followed shortly thereafter. Talk radio hosts picked up the term from there mostly to ridicule the idea and it took on a life of its own, largely as an ironic joke through talk radio and the internet.

The inspiration for this theory may come from the ones seen in the film Capricorn One,

where they are used by the US government to chase down three astronauts trying to reveal that their mission to Mars was faked. The helicopters in the film behave more like sentient beings in their own right rather than vehicles, sometimes turning to face each other for no apparent reason other than pure dramatic effect.

Helicopters, but not as we know them[edit]

Black helicopters are said to be able to perform all kinds of maneuvers that ordinary helicopters cannot, as well as having a silent mode (those who live near airports or major hospitals might wish helicopters could do that!). More recent variations have them as being unmanned drones or substitute them for FEMA ambulances, filling a similar role.

Not all black helicopter fans support the UN/NWO idea. A rival theory has it that they are in fact alien spacecraft in disguise. Sometimes this is mixed in with the NWO angle. Sometimes they're sighted near alleged cattle mutilation sites (either as perpetrators or as investigators.)

It's pretty much the aerial analogue to the Men in Black phenomenon.

The tail section of an actual black helicopter used in the Bin Laden raid.

That being said, the US government does use highly-secretive black, "stealthed" helicopters. The 2011 United States Navy SEAL raid (Neptune Spear) on the Abbottabad, Pakistan compound that resulted in the killing of Osama Bin Laden utilized two stealthed UH-60 Black Hawk helicopters, which were heavily modified to reduce their heat, noise and radar signatures. The helicopters were stealthy enough to penetrate airspace and operate, undetected, within a mile of a major Pakistani military training base. Following the raid, one of the helicopters was unable to take off, and the SEALs were only partially successful in their attempts to destroy it. Photos of the remaining tail section from the Black Hawk were subsequently released by Pakistani media. The photo clearly shows a heavily faceted design unlike any known helicopter in existence. Despite clear evidence, the US government has never acknowledged the existence of such helicopters, and when asked about the photos, a Pentagon official stated that he would "absolutely not comment".[1][notes 1] It is believed that the US military continues to develop and operate similar stealth Black Hawks, for use by special forces units, out of the the Groom Lake remote detachment of Edwards Air Force base, commonly known as Area 51.[2][3]

While most US Army helicopters are painted a dark olive drab color, helicopters belonging to the elite 160th Special Operations Aviation Regiment ("Night Stalkers") operate highly modified MH-60s, MH-47s, and MH-6s that are painted black. Most of their missions are performed at night, hence the name and the black paint of their helicopters.

stealth scout helicopter was developed by the US Army during the late 90s. The Comanche had a radar cross section 360 times smaller than the Apache attack helicopter, and an acoustic signature purportedly 6 times quieter than any existing helicopters.[4] In a manner typical of modern defense spending, the Army then promptly fucked over the entire program by demanding the small, light, stealthy scout helicopter carry enough fuel to ferry itself across the Atlantic without changing the weight goal, and ultimately the program was scrapped with only two prototypes built. Technology developed during the program was almost certainly incorporated into the helicopters used in Neptune Spear. 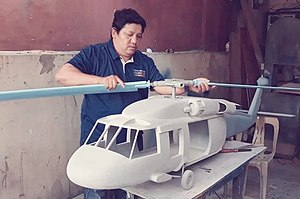 The making of AH-60L/S-70 Battle Hawk model. Due to their pop culture references, Black Hawk models are popular among the aircraft model making community

The term has since been used almost exclusively in an ironic or sarcastic way to refer to any conspiracy theory which is particularly absurd and improbable. Black helicopters don't play much of a role in serious conspiracies anymore, as the idea of perfectly silent helicopters flying about at night for no particular reason is a bit superfluous.

Despite that, some Internet cranks who experiment with "Orgone energy" claim that they are being stalked by low-flying black helicopters.[5] Their hypothesis is that their Orgone accumulators are generating a frequency that the Government/New World Order is trying to track. The same frequency, they claim, stops HAARP, and cures cancer, and creates rain, blah blah blah...[notes 2]