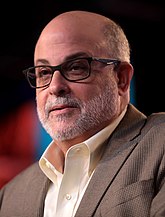 Levin likes to rant against "activist judges" and "big government" and to call people he opposes "morons" and "pukes" usually while screaming into the microphone.[2][3][4][5]

Levin denies the scientific consensus on climate change, and in August 2017 he made possibly the most hilarious climate denial argument ever, saying that past scientists throughout history ("Aristotle, Archimedes, Galileo…") did not mention global warming so that proves climate change does not exist. Showing the depth of his scientific background, Levin mispronounced Archimedes as if "Archie" were his first name.[6]

The George W. Bush administration was too centrist for him. He's also obsessed with what he calls "Islamo-nazis". He thought Obama and the Supreme Court were conspiring to bring Stalinism to the United States. His voice is also somehow more annoying than Rush Limbaugh's, resembling that of the cartoon character Master Shake.

He shouts down callers who disagree with him, as "drones".[7] For example, in one notable call in 2014 Levin went off on an atheist caller about separation of church and state.[8]

Levin promotes the whacked-out conspiracy theory that the United States found Weapons of Mass Destruction (WMD) in Iraq during the Iraq War, despite admissions by the U.S. government to the contrary; he actually believes that Karl Rove and the Bush White House covered up the discovery of WMDs for political reasons (WMDs were the primary justification for the US launching the war).[9][10]

Levin called presidential candidate Donald Trump a "radical kook" for saying that WMDs were not found in Iraq.[11][note 1] However, after Trump was elected president, he quickly jumped on the Trump bandwagon.

Levin compared same-sex marriage to incest between a father and an adult daughter, and called the Supreme Court's ruling on same-sex marriage "a direct assault on our entire American heritage and our constitutional process.”[13]

Levin has very close ties to the wingnut Media Research Center, whose "news" division CNSNews.com published an article about him every 2.7 days in 2018. At one point Levin and the MRC had a cross-marketing agreement resulting in Levin heavily promoting them on his radio show.[14]

Levin is also a blatant racist and xenophobe. On immigration, in Levin's view, the United States is "a nation not of immigrants, we are a nation of citizens” and that many of the problems with immigration stem from "liberals" and the "Democrat [sic] party" favoring recent immigrants over "the citizens who have made this country."[15]

In general, Levin has accused liberals of hating the country and blames them for everything.