From RationalWiki
(Redirected from Planet of the Apes)
Jump to: navigation, search 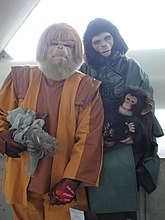 Not a screenshot from the film…

Planet of the Apes (or Stop the Planet of the Apes, I Want to Get Off![1]) is a 1968 film starring Troy McClure[notes 1] Charlton Heston and Roddy McDowall. This article is full of "spoilers", so if you're one of the few who hasn't seen it yet, stop reading it now, and get a copy. The film is based on a novel by the Frenchman Pierre Boulle, who also wrote Bridge over the River Kwai.[notes 2] The original screenplay was written by Rod Serling, of Twilight Zone fame, but Serling's script underwent extensive modifications. Serling was responsible for the killer plot twist at the end, which is one of the best remembered bits of the film.

Like all the best science fiction, it isn't just exoticism or escapism, but addresses issues relevant to its times. It is an excellent satire on religious fundamentalism, racism, and the relationship between science and tradition. Don't let the filthy rubber ape masks fool you.

It's also partly a comedy, which a lot of people forget.

In January 1972, a spaceship leaves Earth. Its crew is made up of three men (Taylor, Landon and Dodge) and one woman (Stewart). Taylor (played by Charlton Heston) is the captain. While Taylor and his crew travel, seven hundred years pass on Earth, although it feels like only a few month have passed to the astronauts. Their continued journey will take several more centuries but they will spend most of it in a deep sleep inside special chambers and will age only a little as a result.

Taylor, Landon and Dodge are awakened when their ship starts to go into a crash landing. They find that Stewart has died of old age as a result of her sleep chamber having become damaged. The spaceship comes down in a lake in the middle of a mountainous desert. The three men manage to escape before the ship sinks. They think that the planet they are on may be orbiting a star in the constellation of Orion. They go off in search of land capable of providing them with food. After a long trek through the desert, they eventually come to an oasis. There they find primitive humans who cannot talk. Taylor is confident that they can rule over those people and become the new masters of the planet.

Gorillas mounted on horseback and armed with guns suddenly appear. They attack the humans, capturing some and killing others. Dodge is killed. Landon and Taylor are both wounded and captured. It is later revealed that Dodge undergoes brain surgery that leaves him exactly like one of the mute primitive humans that are native to the planet. 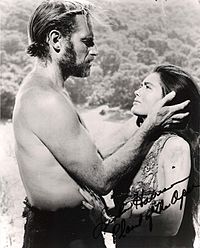 Charlton Heston as Taylor and Linda Harrison as Nova in a publicity photo for Planet of he Apes.

Taylor, along with a primitive human woman whom he later names Nova and with whom he falls in love, is taken to a laboratory. Although he is unable to speak due to being wounded in the throat, Taylor takes a pencil and some paper and is able to prove his intelligence and communicate through writing with two chimpanzee scientists, the animal psychologist Zira and her fiancé the archaeologist Cornelius. The important orangutan Dr. Zaius, Minister of Science and Chief Defender of the Faith, learns of the unusual human. By making a paper plane, Taylor shows Dr. Zaius that ape scientist have been wrong in dismissing flight as a scientific impossibility. Believing that he could be the first of a new breed of intelligent humans that could threaten the apes' position as the dominant species, Dr. Zaius plans to have Taylor castrated. Taylor manages to escape. he is recaptured but by that time has recovered his ability to speak.

A trial begins to determine what should be done with Taylor. The belief that Cornelius and Zira have in a dangerous concept called evolution is mentioned during the trial. Zira, Cornelius and his young nephew Lucius help Taylor to escape again, along with Nova. The two humans accompanied by Cornelius and Zira deliberately lead Dr. Zaius and some gorilla soldiers to a cave in an area that is supposed to be off limits to apes called the Forbidden Zone. It is the site of an archaeological dig that Cornelius had previously carried out. Cornelius shows Dr. Zaius some artifacts which suggest that humans were once more intelligent than apes and were the planet's dominant species. The most important of those artifacts is a human doll that can talk.

Dr. Zaius, however, already knows the truth about the history of humans and apes on his planet and is part of a conspiracy to keep that truth covered up. He orders the gorilla soldiers to blow up the cave and has Cornelius and Zira to be arrested for heresy. He allows Taylor and Nova to escape on horseback and go further into the Forbidden Zone, however, certain in the knowledge that Taylor will not like what he finds there.

Shortly afterwards, Taylor finds the ruins of the Statue of Liberty buried in the sand. He realizes that he has not been on an alien planet but has been on Earth all along. Concluding that the world that he knew must have been destroyed in a nuclear war, Taylor calls on God to punish those responsible for the war by damning their souls to hell.[2]

The world of Planet of the Apes is divided into castes based on species:

One theory about the Patterson-Gimlin Bigfoot film suggests that the costume maker from the Planet of the Apes was used. Philip Morris, the costume designer responsible for the PotA suits, claimed to have lent a gorilla suit to Patterson.[3][4] While the film is almost certainly a fake, the Sasquatch in the film doesn't really look that much like the apes in the film, so for that reason alone, it probably has another source.

"Take your cold, dead hands off my guns you filthy ape!"

And the classic line (addressed at Taylor):

Don't be fooled by the plain red screen. This should play.