Interracial marriage in the United States

Interracial marriage means marriage between individuals of different races, e.g. between black and white, or Asian and black, etc. A particularly odious holdover from slavery and Jim Crow in the United States was the fact that marriage between whites and blacks (or Asians or Native Americans in other cases) was illegal in many states until such laws were struck down by the Supreme Court in 1967. As of 2008, 1 in 7 new marriages in the US are interracial.[1]

In 1958, 17-year-old Mildred Jeter and her childhood sweetheart, Richard Loving, a 23-year-old white construction worker, drove 90 miles north to marry in Washington, D.C. because interracial marriage was illegal in the Commonwealth of Virginia. The night they returned to their home in Virginia they were arrested at 2:00 in the morning and charged with unlawful cohabitation because their marriage certificate was not recognized as valid. They pleaded guilty, and Caroline County Circuit Court Judge Leon M. Bazile sentenced them to a year's imprisonment, to be suspended if they left the state for the next 25 years.[3]

In the words of Judge Bazile, "Almighty God created the races white, black, yellow, malay and red, and he placed them on separate continents. And but for the interference with his arrangement there would be no cause for such marriages. The fact that he separated the races shows that he did not intend for the races to mix." Examples of this specious reasoning still echo in Biblical literalist and creationist circles.[4] 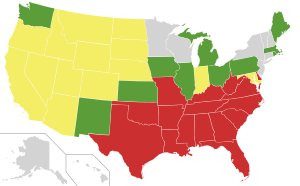 The Lovings moved to Washington in 1959 but they yearned to return to their rural roots. They were arrested again in 1964 for traveling together to visit her mother in Virginia. Loving wrote a letter to Attorney General Robert F. Kennedy to find out if new anti-segregation legislation would allow the couple to travel freely. The couple was referred to the American Civil Liberties Union and assigned an attorney. On June 12, 1967, in Loving v. Virginia, the U.S. Supreme Court unanimously declared: "There is patently no legitimate overriding purpose independent of invidious racial discrimination which justifies this classification. The fact that Virginia prohibits only interracial marriages involving white persons demonstrates that the racial classifications must stand on their own justification, as measures designed to maintain White Supremacy. … There can be no doubt that restricting the freedom to marry solely because of racial classifications violates the central meaning of the Equal Protection Clause [of the U.S. Constitution]".[5]

In November 1998, South Carolina finally removed its constitutional ban on interracial marriage, which was added to the state constitution in 1895. Although the prohibition had not been recently enforced, the clause prohibited "marriage of a white person with a Negro or mulatto or a person who shall have one-eighth or more of Negro blood." A Mason-Dixon poll conducted in August 1998 showed two-thirds of voters favored removing the ban, 22 percent opposed it and 11 percent remained undecided. The sample of 806 registered voters contained about twice as many whites as blacks.[6]

Alabama gets that banjo off its knee[edit]

In November 2000, Alabama became the last state to overturn a law banning interracial marriage. The one-time home of George Wallace and Martin Luther King Jr. had held onto the provision for 33 years after the Supreme Court declared anti-miscegenation laws unconstitutional. Yet as the election revealed—40 percent of Alabamans voted to keep the ban—apparently many Alabamans still see the necessity for a law that prohibits blacks and whites from "mixing blood".[7]

An April 2011 poll of 400 Mississippi Republican primary voters asked as part of its survey on 2012 Republican Presidential primary candidates, "Do you think interracial marriage should be legal or illegal?". The responses were "Legal" 40%, "Illegal" 46%, and "Not Sure" 14%.[8][9]

In March 2017, the Pew Research Center analysed secondary sources and conducted 1,778 phone surveys regarding how public opinion of interracial marriage has changed in the 50 years since the Loving v. Virginia decision.[10] They found that since 1990, the percent of non-black people who would oppose a relative marrying someone who is black dropped from 63% to 14%, and roughly twice the percentage of Republican/Republican-leaning respondents over Democrat/Democrat-leaning respondents said that the growth of intermarriage is a bad thing (12% to 6%), with opposition being strongest in the 65-and-older cohort (21% across both parties).