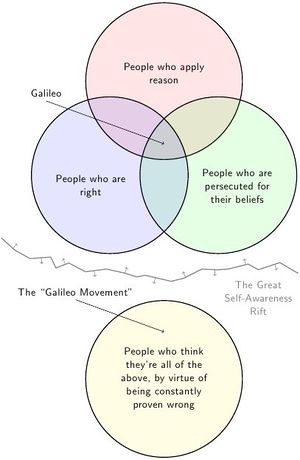 There's a difference between [everyone calls you an idiot] and [genius]. No, really. (Source)

The Galileo gambit (also Galileo syndrome[2]:165-166 and Galileo fallacy) is a logical fallacy that asserts that if your ideas provoke the establishment to supposedly vilify or threaten you, then you must be right — "everyone says I am wrong, therefore I am right."

Users of the fallacy are to be understood as being essentially "Galileo wannabes".

The fallacy refers to Galileo Galilei's famous persecution at the hands of the Roman Catholic Church for his defence of heliocentrism in the face of the orthodox Biblical literalism of the day (though some alternative medicine proponents use Ignaz Semmelweis instead of Galileo). People use this argument repeatedly in response to serious criticisms that more often than not they just don't understand. What proponents of this fallacy fail to consider is that not all people who challenge the mainstream scientific consensus are martyrs or revolutionaries; in most cases, they are just simply morons.

It essentially conflates the way one is treated with the reason one is treated that way. An extreme example of this might be the treatment of criminals under totalitarianism; while many genuine political dissidents were imprisoned in Siberia under Soviet rule, so were many thieves, murderers and rapists. It does not follow that because the first group were persecuted for political reasons that the criminals were in the right. Likewise, a major manufacturer may take steps against someone who is about to expose their appalling pollution or human rights records, but they will also pursue someone who is making libellous and false statements about them.

The fallacy is an appeal to the minority, an appeal to authority, a conditional fallacy, and an association fallacy. Also related to argument from ignorance.

The structure of the argument is:

P1: Galileo was persecuted and was correct.
P2: I am persecuted.
C: I am correct.

They made fun of Galileo, and he was right.
They make fun of me, therefore I am right.

It is freakishly common among creationists and global warming denialists alike against the evil scientific consensus. Examples include:

It is also common for proponents of scientific racism to play the victim card and claim they are being censored by a massive "politically correct" conspiracy when, in reality, their ideas are just simply pseudoscientific bullshit.

The Galileo gambit isn't just for crank scientists. Business executives can get in on it too. For example, during Enron's final months, as the lawsuits piled up and the SEC closed in, a small (and gradually dwindling) faction of employees were firmly convinced that the company had done no wrong, claiming that they were being persecuted for trying to shake up the industry rather than for committing fraud. They went by the motto, "You can always tell who the pioneers are, because they're the ones with arrows in their backs."[4]:413

The Galileo gambit in politics[edit]

A common usage of this fallacy in politics today is for a politician or other figure to "play the victim," pointing at people's opposition to their political program as evidence of its "soundness."

In the West, this dodge was first employed on a large scale by early Christians, many of whom deliberately entered into confrontations with the Roman state and then obtained martyr status when they were executed, all according to plan.[6] This allowed the Church to ask such questions as, "Would the Disciples die for a lie?"

Examples of actual Galileo-like figures are exceedingly rare, and it's even rarer when those figures actually proclaim themselves as Galileo-like figures. (After all, if you have actual evidence to back yourself up, why would you need to rely on such a gambit?) Still, it does occur from time to time, and when it does happen, it's often an important part of the structure of scientific revolutions. Besides Galileo himself, some examples include:

Reminder: the existence of counterexamples does not nullify the fact that the Galileo gambit is, by all means, a fallacy.

In reality, taking up the mantle of Galileo requires not just that you are scorned by the establishment but also that you are correct[note 1] — that is, that the evidence supports your position. There is no link between being "persecuted" and actually being correct. However, the selective reporting of cases where people who were persecuted or ostracized for beliefs and ideas that later turned out to be valid has instilled a confidence in woo promoters and pseudoscientists that is difficult to shake. They forget the part where they have to prove themselves right in order to be like Galileo.

The fallacy as normally used relies, to a large extent, on misrepresenting the refusal of the scientific community to publish or engage with cranks as "censorship."

The gambit takes many forms, but in most cases someone using it to promote their ideas will highlight their perceived persecution. This supposed persecution is blown out of all proportion until an observer almost has no choice but to accept their ideas practically as a sympathy vote. Such tactics are used in the "documentary" Expelled: No Intelligence Allowed, which focused on several academics who supposedly lost jobs because they promoted intelligent design as a valid hypothesis. The film portrayed this as a violation of academic freedom and played the persecution card extensively. Among those capable of indulging this gambit, mere opposition to their crankery alone may be sufficient to induce the belief that they are being persecuted and, hence, were right all along.

Cranks who use the gambit to claim persecution by "Big Science" often fail to see the irony in the comparison — it was the Catholic Church that censored Galileo, not the "scientific establishment".

An additional irony arises when we consider that if the maverick idea does manage to amass enough evidence to win over the majority, it will become the new consensus — at which point, by the fallacy's own reasoning, the idea must become wrong! After all, a new "Galileo" might assert that the Earth is indeed the Universe's stationary center (some people actually do assert this). The astronomers who would disagree and point and laugh, by the fallacy's line of reasoning, are just the Catholic Church all over again, and they won't have the last laugh (though taking this a step further, neither will the new "Galileo"; an alternating series of laughs will terminate only when the human race disappears). This kind of madness may be consistent with certain flavors of postmodernism, but then again, so is everything else.

"You get the most flak when you're over the target"[edit]

"You get the most flak when you're over the target" is a pseudo-logical gambit, a favorite of Internet argument used as a substitute for rational rebuttal. Its intention, of course, is to prove that a hopelessly-irrational woo proposition must be right because opponents are taking the trouble to criticize it. The popularity of this fallacious way of thinking is one major reason why real scientists are often reluctant to debate creationists.