The debate between so-called "Cornucopians" and "Malthusians" underlies much of the rhetoric behind debates over the implications of environmental science. The term "Cornucopian" references the "horn of plenty"[1] of Greek mythology. Cornucopians generally argue against economic and population-growth models with strict limits, while Malthusians (sometimes "neo-Malthusians", named after Thomas Malthus, 1766-1834) take opposing positions.

The debate centers on the severity and policy implications (and sometimes the existence) of environmental issues such as:

Two of the foundational books of the modern environmental movement[2] are Rachel Carson's (1907–1964) Silent Spring ISBN 0-618-24906-0 (published in 1962) and Paul R. Ehrlich (1932–) and Anne Ehrlich's (1933–) The Population Bomb (released in 1968). While Carson's concerns have proven correct, that wasn't the case for the Ehrlichs: their book predicted mass famine and starvation in the 1970s and 1980s, which obviously failed to eventuate (except in populous continents like Africa and Asia). A major deficiency in the assumptions behind some of The Population Bomb's predictions was that the Ehrlichs were unaware of the contemporaneous work of Norman Borlaug (1914–2009), who fostered the development and spread of high-yield crops known as the "Green Revolution" which peaked in the 1960s.[3] The Ehrlichs themselves now consider their book to be flawed, though they defend it as important in raising the general issue of overpopulation.[4][5] Despite this acknowledgment, some have criticized them for not fully incorporating criticisms of the book into their later work and statements.[6]

Some commentators regard Limits to Growth,[7] the 1972 report produced by the Club of Rome

and based on the World3 model,[8] as one of the prominent works of the "Malthusian genre". People often quote mine it to make it appear as if it predicted total societal collapse by the end of the 20th century, or, when that date came and went, by 2040. Limits to Growth, in fact, offered various scenarios and a 2008 study has shown that the core predictions in its business-as-usual[9] or "standard run", scenario trends have held true.[10]

Overshoot: The Ecological Basis of Revolutionary Change, a 1980 book by William R. Catton Jr. (1926–2015), builds on Malthusian principles and holds that societies overshooting their ecological carrying-capacity has been and continues to be the primary driver of cultural, social, and political change. While never a big seller, the book continues to be a primary reference point for Malthusians as of 2018.

Julian Simon (1932–1998) rose to prominence in the 1970s and 1980s as Cornucopian bullshitter-in-chief and head "doomslayer".[11] His most famous work, The Ultimate Resource, argues that growth is, economically speaking, "unlimited" and that human ingenuity is "the ultimate resource".[12] A new generation of Cornucopians has sprung up to fill the void left by Simon, some preferring to call themselves "free market environmentalists". Bjørn Lomborg, author of the scientifically-dubious The Skeptical Environmentalist, claims that Simon inspired him. Matt Ridley deftly recycles Simon and a number of denialist talking-points in his book The Rational Optimist.[13][14] Steven Pinker also pretty much follows a Simon-like brand of “things will probably sort themselves out; so we don’t really need to do anything” cornucopianism.

In 1980 Simon made a wager with Ehrlich that the prices of five commodities would be lower in 1990 than they were in 1980, and Simon won the bet.[15] However, Simon fans generally omit to mention that he lost a second bet with professor of forestry David South on the price of timber.[16] In 1995 Simon issued a second challenge, claiming that "all long-run trends" point in the direction of increased material and environmental welfare for the world population. Ehrlich and the late climatologist Stephen Schneider[17] offered Simon a bet on 14 environmental (and one economic) measures, including increasing atmospheric carbon dioxide leading to increased global warming, which Simon then refused because he felt the parameters were not sufficiently directly linked to human welfare. Simon's counter-offer to bet on direct indicators of human quality-of-life[18] — leisure time, life expectancy, and purchasing power, was also refused.[19]

John Tierney of the New York Times and Matt Simmons of the Council on Foreign Relations made a similar wager, in which Simmons bet that the price of oil would reach over $200 per barrel by the end of 2010. Quite obviously, Simmons lost.[20]

Amory Lovins (1947–), head of the Rocky Mountain Institute, correctly predicted in the 1970s that energy use and economic growth would decouple over the proceeding decades and has argued for a "soft path" out of the energy crisis, emphasizing energy efficiency in solving global warming and other environmental problems.[21][22] However, he also made many more failed predictions:[23] 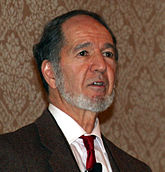 Crank ideas tend to accumulate the farther out to either side one travels along the Cornucopian-Malthusian continuum.

Denial of various environmental issues (such as global warming, ozone depletion, acid rain, etc.) emerges repeatedly from the Cornucopian side. Wishful thinking (as that about abiotic oil) occurs commonly among the crankier types.

On the Malthusian side, one finds hard green ideologies, the more misanthropic forms of the Gaia hypothesis, and associated nature woo. Treehugger.com has characterized predictions of imminent "doom 'n gloom" as "disasterbation".[26] Also on the extreme Malthusian side can be found "lifeboat ethics" (a concept coined by Garrett Hardin[27]) which holds that the poor nations have already become too overpopulated to benefit from help, and which likens the rich nations to lifeboats that will sink if they share their resources and remain afloat if they don't. This view inverts the conventional wisdom by claiming that it is immoral to give aid to the starving, because to do so means the rich and poor nations will both starve. The broader influence of Hardin's line of thought has led to an enthusiasm for highly controversial immigration restrictions in some quarters of the environmental movement.