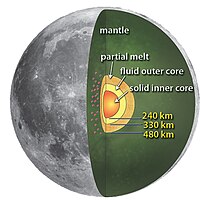 What the inside of the Moon actually looks like. Nearly 1,737.5 km[1] of solid mantle isn't exactly hollow, now is it?

The Hollow Moon theory, also known as the That's no Spaceship Moon theory, is the sister of the Hollow Earth theory. It proposes that the skulls of those who promote it are Moon is hollow, and of course a huge spaceship product of illegal aliens. Like the former, it is a pseudoscientific belief supported by zero evidence, ripe for believers in NASA conspiracy theories.

The first suggestion of the Moon being hollow in science fiction was in H. G. Wells' The First Men in the Moon, published in the year 1901.[2][3][4]

In the 1970s, Soviet scientists Michael Vasin and Alexander Shcherbakov proposed that the Moon is a masive space station built by some unknown alien beings[4] in an article called Is the Moon the Creation of Alien Intelligence?. It was not published in any peer-reviewed journals, but on what was basically the Soviet equivalent of the Reader's Digest.[3][5][6] Vasin and Shcherbakov also cited earlier speculation by astrophysicist Iosif Shklovsky,

who believed that the Martian moon Phobos was a hollow, artificial satellite, which we now know is certainly not the case. This should say it all about just how credible this hypothesis is.

The belief relies heavily on the asinine suggestion that since large lunar craters (which scientists generally agree were formed from asteroid/cometary impact) are generally quite shallow with flat or even convex bottoms, ergo these meteors are allegedly creating a cup-shaped dent in the rocky surface of the moon- while the larger meteors, it argues, are drilling through a rocky layer and hitting some armored metal "hull" underneath that conceals a Death Star-like UFO underneath. Hollow-mooners may also try to explain why almost all of the Moon's dried lava flows are on the side that always faces Earth by arguing that these "seas" (or "mares"), currently known to be plains of solidified lava that oozed from the Moon's interior billions of years ago, are some sort of reinforcement to better endure such impacts[7].

However, as pointed out by skeptic writer Jason Colavito, the "evidence" cited by Vasin and Shcherbakov is only circumstantial at best.[4] Another major problem is how such spacecraft would be able to withstand impacts as great as those which formed the Imbrium basin

- the latter of which is believed to have been sufficient to completely destroy the Moon, had impact conditions been different. Were Luna actually hollow, it is likely that the impact force would have been more than sufficient for this to happen[8].

Seismometers installed on the Moon from 1972 to 1977 by the Apollo missions have recorded "moonquakes", demonstrating that the Earth exerts tidal forces on the Moon- something that would only be possible if there were solid mass inside and beneath the moon's crust- which, in response to the Moon being slightly squeezed by tidal forces, will slide against each other and cause the quakes. One hollow-Mooner argument tries to explain this away by asserting that the Moon was "ringing like a bell" during some of those tremors (specifically the shallow ones).[9] The same assertion was also made when Apollo 12 deliberately crashed the Ascent Stage of its Lunar Module into the Moon's surface, followed by a further assertion that the Moon must be "hollow like a bell".[3] However, lunar seismology experiments conducted during the Apollo missions have since shown that the lunar body has shallow quakes that act differently than those on Earth, due to differences in texture, type, and density between the two bodies. However, there is no evidence of any massive empty chasm inside the Moon that encompasses a super-colossal portion of its interior volume.[9]

Yet another assertion tries to offer the existence of a massive hollow within the Moon as an explanation for why the Moon, with a density is 3.3 g/cm3, is less dense than the Earth (whose density is 5.5 g/cm3).[7] The fact that the Moon is made up primarily of rocky material that has such density can be easily explained by the Giant impact hypothesis,

which suggests that the Moon was formed out of material from the Earth's crust and mantle that was blasted into orbit by a Mars-sized protoplanet's impact with the early Earth.[note 1]

Some authors (such as Don Wilson in his book Our Mysterious Spaceship Moon), also claim that such spacecraft would have come here a few millennia ago, in an attempt to explain why some cultures have legends of a second moon shining in the sky. One has to wonder what became of the "real", natural Moon, and why these ancient aliens who allegedly visited the Earth system were so clumsy to allow whatever made it disappear to happen, and especially where the exhausts of the massive engines needed to propel such humongous spacecraft are, plus the equatorial trench, the superlaser dish, and that pesky thermal exhaust port[10].

Cranks who support the hypothesis include David Icke[6] (because of fucking course he does), the writers of Who Built the Moon?, and, as stated above, Don Wilson- who in a later book, Secrets of Our Mysterious Spaceship Moon,[11] claims astronauts of the Apollo spacecrafts saw TIE fighters and the Drow goddess Eilistraee dancing skyclad there UFOs in the Moon and that it is a sort of interplanetary Noah's Ark employing as usual what looks like a mix of quote mining, cherry-picking, and argument from authority as the most suitable arguments.

It's also worth noting that this idea appeared back in the 1970s, when there were three different theories for how the Moon was formed: That it was an independent dwarf planet until it was captured by Earth's gravity, that the Earth was spinning so fast that part of it broke off and formed the Moon, and that the Moon was accreted from the same accretion disk that formed the Solar System's largest madhouse our planet. However, all of these had failed to explain its origin.[note 2] This was before the currently most accepted one had been embraced by the scientific community, when all of these hypotheses were discredited when refined analysis of the lunar rocks brought back by the Apollo missions was found to be very similar to rocks found on Earth- which also disproved claims that lunar rocks were older than Earth's oldest known ones. This indicated that a) the Moon either formed from the same accretion disk as Earth or was formed from the debris of a giant impact with it, and that b) the Moon is not a captured dwarf planet.

What the real, actual science says about the Moon's interior[edit]

As noted in the picture at the top of this article, the current, established scientific consensus points to a Moon that is mostly solid, with at most a possible fluid outer core and partial melt at the bottom of its mantle.[12] This is supported by both the network of seismometers set up on the Moon's surface and its moment of inertia factor

- which is perfectly normal for a solid celestial body with a non-hollow, rocky/metallic interior.[13][14]

Another gaping hole (badum-tssh!) in this hypothesis is how unstable our Moon, with the mass and gravitational pull that it has, would be if it were hollow- especially given that Earth's tidal pull on it that is already so immense that only one side of the moon ever faces towards its host planet, and was also strong enough to pull almost all lava flows to the side of the Moon that faces us when it was still geologically active.

The inside of a "rubble pile" asteroid. Notice how its interior is somewhat hollow.

Even though the Hollow Moon theory is clearly bollocks, a significant number of Solar System asteroids are either known or believed to be "rubble piles

", formed by many smaller chunks held together by gravity, and in rare cases, magnetism if they contain large amounts of iron[15])- leaving behind many gaps in between the pieces of gravel that make up such asteroids- not like the super-colossal Australia-sized chasm that hollow-Mooners believe to lie within Earth's moon, but more in the form of caverns and tiny spaces between the rocks. In addition to these gravelly asteroids, the legitimately hollow objects in our Solar System also include: