The Dallas cops got their man... or did they?

Lee Harvey Oswald (1939–1963) was the assassin of John F. Kennedy, unless even if you believe the claims of the conspiracy theorists. He was also a US Marine who defected to the Soviet Union but then returned with his Soviet wife, Marina.[1] He was not, despite whatever you might have heard, a patsy for the CIA/KGB/FBI/LBJ.

Lee Harvey Oswald was born to Robert Edward Lee Oswald Sr. and Marguerite Oswald,[2] née Claverie.[3] He was born on October 18, 1939, in New Orleans, Louisiana, where his parents were living at the time. By the time he was born, Robert Oswald Sr. had died of a heart attack in August. Marguerite was not consistently able to take care of him and his brothers at the time, so he was sent to an institution often referred to as an orphanage.[4] After a remarriage ended, Oswald moved with Marguerite to the Bronx borough of New York City. Oswald had issues with truancy during this time period, often skipping classes to hang out in a library. As a result, he had to go to a detention hall. Social workers also interviewed him and his mother, evidence that the Warren Commission later used in their report. He had already encountered socialist positions, but his interest in socialism and then communism became more intense when he moved back to the city of his birth, New Orleans. There he joined the Civil Air Patrol, in which he is believed to have encountered David Ferrie, a notable anti-communist who was teaching aviation at some of the time that Oswald was there.[5]

The caption in caps says it all.

Eventually, Oswald joined the Marines when he was still 17. His service there is another focus of conspiracy theorists. From all reports published by people with credibility, Oswald was a good or very good marksman. He was stationed for a long time in 1957 in Atsugi, Japan.[6] There, he was known as Oswaldovich to many because of his interest in Russia. However, it appears that people did not take ideas that he was a communist spy seriously enough to prevent him from viewing classified information. In Atsugi, he was wounded by a gun that he was storing improperly, though it was judged a fairly minor violation when it could have been much more serious.[7] Some think that it was intentional. His unit later went to Subic Bay in the Philippines, where he got into a fight with another military member and got disciplined, and sent to Pingtung in Taiwan before returning to Atsugi. Sources attest that Oswald had a girlfriend when he was in Japan. He generally did not confess his communist sympathies, though his Russophilia was made obvious and he supported Fidel Castro, though this was before he had lost support among almost all non-communists. Kerry Thornley, one of the originators of Discordianism, however, knew Oswald and knew that he was a Communist. Eventually he left the Marines and enrolled in a Swiss college.

After he was discharged, under the pretense of assisting Marguerite Oswald, he went to Fort Worth and attempted to get a job in shipping, which he later listed as employment when booking passage to Europe, though Russia was not included. He disembarked at Le Havre in France, and immediately went to England before going to Finland. When in Helsinki, he applied for a visa to see Russia. There, he tried to become a Soviet citizen, with the aid of his guide to Russia, Rima Shirokova. However, he could not get one in time. In desperation, he tried to commit suicide, but it failed. While waiting for a further decision that might let him stay, he tried to renounce his American citizenship. Eventually, Aline Mosby interviewed him, and he was granted a stay in Russia for some time. Later, he was sent to Minsk in modern-day Belarus, though it was then part of the Soviet Union, and was granted Russian citizenship. While at Minsk, he worked in one of the factories there. He joined a union, made friends, and hunted there. He wrote about his experiences there, showing that he felt that the Communist Party got too many benefits as opposed to everybody else, which he considered against the nature of true communism. Because of the disappointment he experienced, he attempted to return to America. After that, he met and married Marina Prusakova. Soon after the marriage, he redoubled his efforts to move back to the United States. While trying to return to the United States, the Marines downgraded his discharge to undesirable after they heard of his defection. June Lee Oswald was born shortly after. The family eventually left at the edge of spring and summer, and Lee Harvey Oswald wrote that he felt that both the Soviet Union and the United States had significant problems. 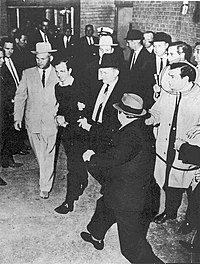 He stayed in New York City for a day with the family until they could get to Fort Worth, Texas, the intended destination. Robert Oswald, his brother, had invited them to stay there. While there, Lee connected with other Russian speakers and a stenographer, and the couple talked with Robert and explained America to Marina. He worked as a metalworker while he tried to support a family on his own. The FBI tried to interview him, and they got some information despite his combative response. During this period, he was in close contact with much of the Dallas Russian community, including George and Jeanne de Mohrenschildt. When in Dallas, he got a job working with photographic prints. He often quarreled with Marina, though he was generally considered attentive to June. His Russian acquaintances grew irritated at this, as they felt that their attempts to help Marina had been in vain as the couple was still together. Under the alias A.J. Hidell, Oswald ordered a gun. On April 10, Oswald attempted to shoot General Edwin Walker, a notable right-wing leader, through the window of his house; his shot missed. Marina became enraged and made him promise never to do it again. Though Oswald thought the De Mohrenschildts knew because of a joke George had made, they did not. Nobody but the Oswalds knew of this until after he shot Kennedy. Marina sand June stayed with their friends the Paines while Oswald looked for work in New Orleans, where he had an aunt Lillian Murret. He began to work at a coffee company, though he lied and said that it was photographic work to Marina and the Paines. Marina came to New Orleans, but Oswald had then been fired from his job. During this time period, he became increasingly infatuated with the idea of traveling to Cuba. Oswald then tried to campaign in public for an American policy of friendliness to Cuba under the Fair Play for Cuba Committee, though his branch was not recognized. He got into some disputes with the anti-Castro Cubans in New Orleans, including Carlos Bringuier, whom he then debated. Oswald then took a trip to Mexico while Marina stayed with the Paines yet again. He tried to get passage to Cuba from the Cuban consulate in Mexico City, but it was rejected. Later, he looked for work in Dallas while Marina remained with the Paines in Irving. He began to work at the Texas School Book Depository after an employee there told him of a job opening. On October 20, Rachel Oswald was born to Lee and Marina.

On November 21, Lee went to Irving, though he would not normally, to pick up some "curtain rods". In actuality, he picked up a gun that he owned. Later that same day, he fired three shots at the presidential motorcade. One shot missed, one hit both John F. Kennedy and Governor Connally, and one hit only Kennedy. He was arrested after fatally shooting police officer J. D. Tippit

on his way to a movie theater. Jack Ruby fatally shot him a few days later while he was being moved out of the police station to the city jail.

Of course, the conspiracy theorists wouldn't accept all the correct information. They needed it to be wrong, though a few of their claims are either debatable or not wrong.

That's not quite true. Oswald, by all accounts, was a Marxist generally. Before he entered Russia and during the first part of his stay there, he was infatuated with Soviet-style communism, but was soon disillusioned with it. Later he became very interested in the communism of Cuba and Fidel Castro particularly, thinking it was a better, truer form. For a time, he considered himself solely a Marxist.

However, the horseshoe theory would make Oswald's communism somewhat similar to Hitler's Nazism. Oswald's communism can hardly be considered much of communism, as his major element was as a reaction against the United States, not as a government on its own.

Oswald is connected to the CIA[edit]

Oswald was certainly not a CIA agent. To start with, there is no evidence, anywhere, that proves that Oswald was a CIA agent. Furthermore, it lacks means, motive, and opportunity.[8] There is no way that Oswald would make a good CIA agent. The CIA definitely needed agents, but they would not take somebody like Oswald. He was too likely to not follow instructions in many contexts, barely managing to stay afloat in the Marines. Why Oswald, who already had an interest in both the military and communism, would suddenly decide to be a spy is another question. There is also the fact that he received no pay and took no time to do the extensive training required to be a CIA agent.

His mother (1907–1982). Oswald lived with her for much of his childhood. Married to his father, but subsequently remarried. He got a hardship discharge based on a supposed accident she had, though it was considered exaggerated. She became a staunch believer that there was a conspiracy, and believed that Oswald was somehow a hero.

His brother, now dead (1934–2017). He lived with Oswald for much of his childhood. He was named after their father. He was a major supporter of the Warren Commission, and said his brother implicitly confessed to killing Kennedy in a jailhouse conversation.[9]

Marina Oswald (1941–), née Prusakova (Марина Николаевна Прусакова), now Marina Oswald Porter, is the widow of Lee Harvey Oswald.[10] She later remarried. Her testimony was key to the Warren Commission. Initially she accepted the conclusions of the Warren Commission and most everybody else, before she decided that Lee liked John F. Kennedy too much to shoot him. She generally avoids publicity. Though she has not formally recanted any of her Warren Commission testimony, Marina has contended subsequently that she now believes that Oswald was completely innocent of the murders of Kennedy and Tippit.[11] When contacted by researchers for a conspiracy theory that Oswald was the "prayer man", a man seen standing on the Depository front steps in films taken by Dave Wiegman of NBC-TV and Jimmy Darnell of WBAP-TV during the assassination, an unprompted Marina told Ed LeDoux that the “prayer man” was Lee.[12]

Rachel and June Lee Oswald are the daughters of Oswald and Marina. Both are now adults. Their statements on who they believe killed Kennedy tend to be ambiguous.