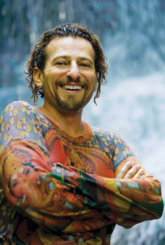 David "Avocado" Wolfe is a staunch avocat for raw food woo[2] and reflexology, and an opponent of genetically modified food[3] and vaccines.[4] Wolfe has been accused of discouraging cancer patients from using effective medical treatments in favor of cancer woo.[5] He is also a statin denialist.[6][7]

Wolfe believes himself to be "the rock star and Indiana Jones of the superfoods and longevity universe."[8] but in reality he's a snake oil salesman.[9] Wolfe promotes numerous alternative medicine and pseudoscientific products on his website, and has featured in infomercials for NutriBullet (which is basically a blender with a phallus messiah complex).

Wolfe believes "mushrooms are from space", "chocolate is an octave of sun energy", and deer antler is "a cosmic substance"[10] (a product he promotes and sells). He is expert at stringing words together in ways that look superficially as though it means something.[11]

Gravity is not intrinsic to matter. That Carl Sagan idea that was sold to us on Cosmos on PBS, was sold to us deliberately to actually confuse us just so you know that. There’s people who have known that gravity is a force that can be displaced. There’s people that have known that since the 50s or even earlier than that. But by screwing up, confusing our mind about things, and giving us incorrect theories we were brain washed into a totally different belief system. That gravity is intrinsic to all matter, we’re fighting gravity, we have to push our way through gravity to launch a craft up into outer space, all this nonsense.[14]

Wolfe believes that gravity is a toxin, and by turning yourself on your head you can turn gravity into a cure for arthritis.[15]

Wolfe doesn't know how solar radiation or light absorption work; he once claimed that solar energy wasn't renewable because "the light [solar panels] absorb is lost forever", stating his belief that solar panels are "draining the sun".[16]

Wolfe is into salt woo: He sells Himalayan salt, which he claims "contains the 84 natural elements needed by the body." One of the "84" elements Wolfe claims are in his salt is mercury. Wolfe knows that mercury is poisonous and points this fact out with other products, but somehow manages to market the alleged mercury in his own salt product as being beneficial.[5] The salt is also alleged to include trace amounts of arsenic and plutonium.[17]

Bringing it all together, Wolfe once stated that "The reason the oceans are salty is to hold the water onto the Earth. If that didn't happen, the water would levitate right off the Earth and that would be the end of it."[18]

He also claims to have five degrees, two engineering degrees from University of California, Santa Barbara, one in political science (from somewhere), a law degree from "University of SD" (probably San Diego, can also mean University of South Dakota instead) and a Masters in Nutrition from the University of Integrative Sciences California[19] (also a guess, there's a legitimate Sint Maarten medical school with the same name[20]).[21]

In addition to his self-published work, Wolfe is also the co-founder of TheBestDayEver.com, an online so-called health magazine.[22]

Most of his material is unoriginal; taken from other sources. He frequently takes alternative medicine and food woo meme pictures from other questionable sites, puts his own watermark on them, and posts them to his Facebook page.

He holds pricey weekend getaways at substandard campsites, and has been accused of sexually harassing at least one of the attendees.[23]