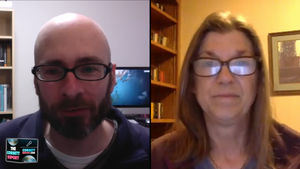 James Corbett is an anarcho-capitalist YouTuber and conspiracy theorist. Seen by some to be an indie "new journalist" known to spread Russian propaganda fake news.[1][2] Others are less enamored. He claims to analyze, deconstruct, re-contextualize, and clarify Western propaganda[3] in The Corbett Report, YouTube, Global Research TV and other shows and websites such as ex-FBI whistleblower Sibel Edmonds'

Supported by donations and open-source journalism,

In addition to the history of oil, power, and economics,[6] alleged false flag events like the Oklahoma City bombing conspiracy theories,

the 9/11 conspiracy theories, and Operation Gladio.

Corbett claims to detail scandalous corruption, injustices, and expose conspiracies, psy-ops, black-ops, and the covert "deep-state secret", "ghost politics", globalist control, and domination agendas of the NWO advocating a "revolution of the mind" to counter-cultural brainwashing dogmas to ultimately foil all centralized governments' monopolistic use of violence, often by using mockery. Ultimately however, all he achieves is talking to an echo chamber of other dangerous morons about nonsense. He is also a vigorous denier of climate change and doesn't like the Intergovernmental Panel on Climate Change (IPCC)

He is your usual conspiracy theorist with the classics bullshit...

He blames Bill Gates for creating this pandemic (Event 201) to push untested vaccines for economic benefit, and establishment of population control with microchips.

He has also spread misinformation about him (obviously) such as the claim that his polio vaccine paralysed 496,000 children in India, citing a 2018 study[9], which states “A total of 640,000 children developed NPAFP in the years 2000–2017, suggesting that there were an additional 491,000 paralyzed children above our expected numbers for children with NPAFP.” This does not directly support the claim, and if James had cared to go down in the paper a little further, the study debunks his own claim by stating-“The AFP surveillance data from India does not provide information about the etiology of NPAFP, and it is tempting to suggest that OPV-related GBS may be the cause for the rise in NPAFP seen across the country. However, GBS is unlikely to be the sole reason for the increase in NPAFP. GBS, caused by OPV, was usually reported soon after an OPV campaign [18,19,20]. Our finding that the NPAFP rate in each year correlated best with the cumulative doses administered over the previous 5 years, suggests that they may not all have been OPV-caused GBS (occurring in 5 days to 6 weeks).” This claim was also fact checked by Full Fact, BOOM, The Logical Indian, Lead Stories, PolitiFact and Poynter. It is true that the observed incidence of NPAFP cases increased in the late 2000s and has stayed relatively high, but this doesn’t mean the polio vaccine was necessarily the cause. The BBC[10] reported that public healthcare along with diagnosis of polio have been substantially better. While it is true that more than 491000 children were paralysed, and that rate is higher than the past decade, but better reach of healthcare in India is held accountable for the high numbers. Although the polio vaccine can itself result in cases of “vaccine-associated paralytic polio” according to the World Health Organisation[11], but the rate is low. Approximately 1 in 2.7 million doses of the oral polio vaccine are associated with paralytic polio. You don’t need a mathematician to tell you that is extremely low and disproves the claim.

His videos on Bill Gates are like a tangential thought process in narrative form, but each tangent is not a new fact to consider: The tangents are suggestions of explaining Bill’s actions or words, tangents are on second-guessing motives, he reinforces those ideas with stories and opinions related to the gruesome topics of 'Bill's master plan'. He builds on the previous guessing by using crafty language to omit reflection, and incomplete unchallenged reasoning. The process results in painting those explanations into a smear with a huge question mark afterwards, as if he was just asking questions and not making allegations. There is no proof that Bill is planning a mass murder or genocide in line with an evil world view, no evidence he plans to microchip the public without consent and lord over them like they were slaves, these ideas are implied by the detailed and captivating picture he paints.

He believes they cause tumours, do not feed millions of people, all studies not saying so are sponsored.

He believes that Trump wants to establish some New World Order. He has devoted an entire series of shows named #FLNOW (Film, Literature and New World Order) how every movie in existence is specially designed to spread propaganda and misinformation brainwashing the masses. From the films Contagion[12], to the Rambo trilogy[13], to Daredevil from Netflix[14], to even poetry and stories from writers such as F.R. Scott, Charles Dickens, the catcher in the rye and even more! Basically, don’t believe or don’t be inspired by any form of media imaginable or you will become a sheep in the NWO, unless I talk about it of course! Only believe the books on NWO I told you to believe![15]

They use ‘physiological techniques’ to brainwash sheeple and just because the foundation gave a grant to a fact checking website sometime 4 to 5 years ago means that all the fact checking websites currently in existence are sponsored by Bill Gates (unless they believe in Corbett Report of course).

One of the first conspiracy theory on his independent ‘news’ site was 9/11. He believes that it’s investigation was intentionally stopped for economic gain.

He is deep in the idea that the UN intentionally releasing hot air as it is funded by corrupt scientists with limited resources and they want to cause disorder in society by the creating the myth of climate change which has now been solidified by numerous studies, all of them are false and paid by the UN. See global warming denialism. Given how much energy is needed to release this much hot air (also including from Corbett!) to the point where most areas around the world have a noticeable average temperature increase, it's probably easier to just pin the blame on human civilization.