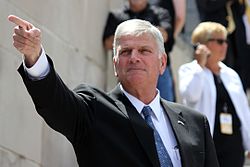 Franklin Graham during his Decision America tour at the Nebraska State Capitol Building in Lincoln, Neb.

Franklin Graham (1952–) is the son of the famous evangelical pastor Billy Graham.

See the main article on this topic: Islamophobia

Franklin Graham called Islam "a very wicked and evil religion".[1][2][3] He also stated on ABC's television show This Week that, “They want to build as many mosques and cultural centers as they possibly can so they can convert as many Americans as they can to Islam".[4]

He has combined his islamophobia with Barack Obama conspiracy theories, by saying that Obama was born a Muslim and is infected with "the seed of Islam".[5] He claimed that with Obama's help the Muslim Brotherhood infiltrated the highest levels of the US government.[6]

Graham assumes without evidence that progressives are mostly atheists.[7]

See the main article on this topic: Homosexual agenda

Franklin Graham believes that the American government is pushing a "gay agenda" and that homosexuals are actively involved in "recruiting" and "exploiting" children.[8] He supports Putin's anti-gay laws[9] and was on board for North Carolina's Amendment 1.[10]

Graham accused the cartoon Arthur of "promoting the LGBTQ agenda" by depicting a same-sex wedding between two minor characters in 2019. He feels that "behavior the Bible says is sinful" should be removed from TV by government action.[11] So he supports censorship against gays but loves free speech for himself.[12]

A Charlotte Observer analysis of his Facebook posts on January 30, 2020 concluded that abortion and homosexuality are really the only sins Graham cares about.[13]

His focus on anti-homosexuality certainly did not please the United Kingdom when Graham planned a tour in 2020 -- all seven venues that planned to host him eventually dropped Graham after learning about his bigoted views.[14] (Graham's response to the cancellations, naturally, was that it was himself that was being discriminated against for his "Christian" beliefs.)[15]

See the main articles on this topic: Donald Trump and Neo-Nazism

Following the Unite the Right demo in Charlottesville, VA, at which a white supremacist killed an anti-racism protestor, Graham rushed to defend Donald Trump and the continuing presence of Confederate statues, saying that the removal of these monuments to racists and traitors was responsible for Heather Heyer's death. While many people had condemned Trump for stoking racial tensions and refusing to condemn American neo-nazis, Franklin issued a Facebook post saying "Shame on the politicians who are trying to push blame on President Trump for what happened in #Charlottesville, VA. That’s absurd. What about the politicians such as the city council who voted to remove a memorial that had been in place since 1924, regardless of the possible repercussions?"[16]

Looking for God (in all the wrong places)[edit]

In June 2016, Graham said that he had no hope for the Democrats and the Republicans and that he's "running a campaign to put God back in the political process."[17] He later spoke at Donald Trump's inauguration.[18] Putting these two fact together, it would seem that Graham thinks Trump is chosen by God, cause, you know, he's such a Godly person.

Graham also spoke in defense of accused sexual predator Roy Moore during Moore's campaign for the US Senate, saying:[19]

When confronted with the news that Donald Trump made a remark in which he referred to some nations as "shithole countries", Graham's response was to deny it happened and to attempt to change the subject by claiming Trump "stood strong for religious freedoms."[20]

Graham versus the Seventh Commandment[edit]

in order to cover up an affair (a clear violation of the Seventh Commandment of the Bible, which forbids adultery), Franklin Graham hem-hawed around the subject. First he stated that "I don’t think (he) has admitted to having an affair with this person", then followed this up by attacking the accuracy of the source. He then followed this up by bizarrely declaring Trump to have "a concern for Christian values", in spite of the above evidence. Finally, he attempted some whataboutism by saying that "our country's got a sin problem", which for some reason does not appear to include Trump's sin problems.[21]

Even a commentator at the National Review called Graham out on this one, pointing out that hypocritically, Graham wrote an op-ed in the Wall Street Journal complaining about Bill Clinton's morality during the Clinton / Lewinsky scandal

See the main article on this topic: Good Samaritan

Contrary to the general Biblical message to welcome strangers (Matthew 25;35:1), Franklin Graham has for the most part been a strong supporter of Donald Trump's hard-line immigration policies, which do anything but.[25] However, in a stopped clock moment, he blasted Trump and Jeff Sessions' "zero tolerance" immigration policies rolled out on May 2018, that would happen to separate immigrant parents from their children, calling the policy "disgraceful".[26]

Graham counseled a woman whose husband was imprisoned in Iran. He was concerned that she might be committing adultery during their long separation, but when it was revealed that the husband was a chronic domestic abuser, he pushed her to return to her husband after he had been released from prison.[27]