From RationalWiki
(Redirected from Hermann Goering)
Jump to: navigation, search 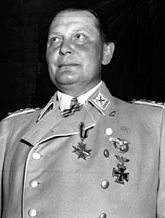 A substantially red-faced Hermann Göring in captivity on 9 May 1945.

Hermann Wilhelm Göring (or Goering in umlautless fonts), also known as Meyer (once even introducing himself as "Meyer" when taking refuge in an air-raid shelter in Berlin),[1] was one of the most powerful people in Nazi Germany, one of the highest ranking members of the Nazi Party, and the Commander of the Luftwaffe. [2]

During World War I Göring was an early fighter ace and was the last person to lead Manfred von Richthofen's (aka the "Bloody Red Baron") fighter squadron. [3] This is important as it helped the early Nazi Party establish a more credible image.[2]

Göring was convicted during the Nuremberg trials of being one of the main participants of the Final Solution, along with Reinhard Heydrich, Adolf Eichmann and Heinrich Himmler. While Hitler had been thinking about a final solution to "the Jewish problem" for quite some time, nobody thought he would actually do it until Göring put it forward to him as a serious suggestion and presented him with the theory as to implementing it that he and the others had formulated. Hitler took a look at the plan and thought "Good idea." Next thing you know...

Göring was a highly decorated veteran where he led several fighter squadrons in the Luftstreitkräfte. Although a highly skilled fighter pilot, he was detested by his men because of his extreme arrogance as he was sent to command a squadron who had achieved more than him.[3] Göring left the war with 22 confirmed air kills.

As Germany was not permitted to have an air force under the terms of the Treaty of Versailles, Göring found work flying civilian aircraft and in travelling air shows.

His achievements in the war became very important during his later political life. Göring was appointed by Hitler to lead the early SA brownshirts in 1922, and participated in the failed 1923 Beer Hall Putsch. He was wounded during the event, which started his long drug addiction, and was forced to flee abroad for several years.

In return for his loyalty, Hitler would continue to give Göring important positions in Nazi Germany until he became confined to a bunker.

Many of the early Nazis were not respected in German conservative circles. Hitler himself was a Catholic Austrian immigrant to Bavaria who spoke with a Bavarian accent. Göring was important in luring Northern conservatives to support Hitler, as he was able to build bridges between from the Nazi Party and established German conservative movements.[4]

Being an aviator, Göring had a keen interest in air warfare and his WWI record as an ace, his influence and prestige meant that the Luftwaffe could be certain of receiving plenty of the funds allotted by Hitler to German rearmament. Air warfare was generally viewed as a very exciting and important new aspect of war among industrialized states during the interwar years. In the military doctrines developed by the German high command, summarized by the slogan Blitzkrieg

the Luftwaffe was to provide air cover and close support to the land forces as well as drop paratroopers to seize strategic points. In preparation for this, the German military had already supported the creation of glider schools prior to the repudiation of Versailles and afterwards developed dive bomber tactics as a way to use tactical bombing to carry out precision strikes.
The aggressive focus of the Blitzkrieg as a way to avoid a repeat of the long attritional slog that was WWI, alongside Göring's background as a fighter pilot, probably had a hand in perhaps the Luftwaffe's greatest omission: not developing a strategic bomber fleet. When Blitzkrieg failed to deliver a quick knock out of the Soviet Union and WWII increasingly turned into a war of attrition, Nazi Germany lacked the strategic bombers which could have been used to target the Soviet military industry that Stalin had prudently (if hastily) relocated deep within Russian Central Asia, or to deliver the kind of systematic destruction of British targets that the British and (from 1942) U.S. air forces started dishing out to Germany. The autocratic command style and notorious inter-service and general inter-organizational rivalry within the Nazi state probably didn't help the Luftwaffe either, but it nevertheless would be the first air force to deploy jet fighters, though not until the last years of World War II when Allied strategic bombers were already hammering the German home front. 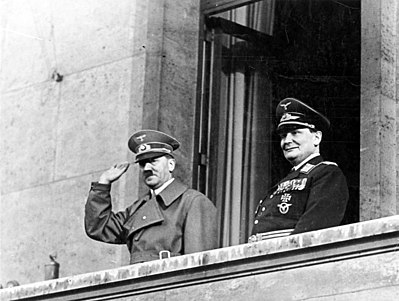 Göring was probably the most competent of the Nazis, his efficiency contrasting with some of the others. He was Chairman of the Four Year Plan and was appointed Reichsmarschall, a rank superior to all other Wehrmacht officers, as well as the Reichsführer SS,[note 1] Heinrich Himmler. In 1941, the incredibly lazy Hitler also made him his deputy in all other offices which meant that Göring got to shoulder most of the work,which he was comfortable with because it also meant that got most of the power.

It came as a great shock to Hitler when Göring attempted to seize power for himself in the last days of the Reich. Cowering in the Führerbunker, Hitler dismissed Göring from all of his offices, deemed him a traitor and put out an order for his arrest. This was never carried out as nearly all of the Nazi High Command had deserted Hitler at this point, having realised that his tree didn't go all the way up to the top branch, something which quite a few people had suspected from the start.

Göring was tried for war crimes and crimes against humanity[6] at the Nuremberg Trials where he is said to have made a compelling defense for himself,[note 2] denying all awareness of the Nazi death camps[note 3] and even managing to squirt out a few tears when showed the photographs and films of the concentration camps and the Holocaust. Nevertheless, he was found guilty and sentenced to death by hanging. Self-important to the end, Göring demanded to be executed by firing squad like the soldier he believed he was, rather than hanged like a common criminal. The court rightly denied his request, reasoning that Göring did not deserve the martial dignity of a firing squad, and that a genocidal war criminal really did deserve the same method of execution as a "common" criminal. Like his master, Göring decided to deny his enemies the pleasure of taking his life and committed suicide by taking a cyanide capsule (hidden in a jar of skin cream[7]) in his cell. Before his death, he declared that he would be remembered as a folk hero in Germany and that statues would be erected in his honour.

, was nothing like him and in fact used the surname "Göring" to help Jews escape, as he (rightly) assumed himself to be immune to most of the Nazi absurdities. Hermann was aware of Albert's activities, but even someone as execrable as Hermann Göring was capable of caring for his family, as whenever Albert got in trouble for his heroics, Hermann would use his influence to bail him out. There is some debate whether Albert should be honored for what he did to help people, especially as the surname and relationship would of course prove difficult. 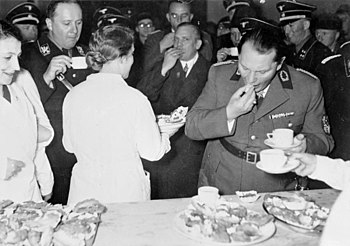 Göring and his one true love.

There are some quite colorful rumours about Göring's sex life, including suggestions that he was a bisexual and/or a transvestite. Apart from general gossip and claims by pro-Nazi "historian" David Irving, there doesn't appear to be any factual basis for these claims. Göring did, however, love food. Just a few days after the Night of the Long Knives, Göring organized a crab feast for himself, Heinrich Himmler, and Erhard Milch.[8] They were sitting around cracking open claws and legs when President Hindenburg's congratulatory telegram came in.

By World War II, Göring had put on the pounds quite a lot and was no longer attractive. He got so fat that when he was taken prisoner, the US pilot in charge of transporting him asked for a bigger aircraft because he was worried Göring would be too heavy for the one he had. No, really.[9] He was the subject of a great many jokes about his weight and his vanity. Even Hitler got in on the act, reportedly telling a (quite funny) joke in which Goring's wife walks in on him dressed down to his underpants, twirling a baton and promoting his underpants to Overpants.[10]

Göring had a fondness for life's finer things, hoarding stolen artwork that Jews had recently owned, which allowed him to amass a personal fortune and an incredible collection of priceless paintings.[11] The art that he stole often furnished his tacky personal palace, the Karinhalle, built in honor of his deceased wife to whom he was highly sentimental (as if he were Shah Jahan with his Taj Mahal).[12] His grandiose palace, unlike the splendid and tasteful Taj Mahal, was destroyed by his orders as the Soviet Army approached and was never rebuilt (and likely never will be). He would also exchange bribes for artwork. Diagnosed as a narcissistic sociopath at the Nuremberg trials,[13]

Göring also was a passionate hunter and as a matter of fact he or people operating on his behalf wrote the German laws on protecting animals and making hunting more humane, which are still largely in place.[14] As Göring deemed himself better at hunting than anybody else and had a propensity for grandiose titles, he styled himself "Reichsjägermeister", or "Imperial hunting master".[15]