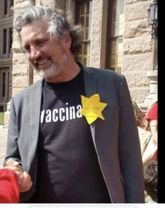 Del Bigtree in defiance of the genocide of measles.

Del Matthew Bigtree is a fairly popular anti-vaxxer, perhaps best known for using "fear mongering based on misinformation" contradicting consensus and vaccine safety for profit earned from supplements and advertising revenue. He first rose to prominence by teaming up with his colleague Andrew Wakefield who helped him produce the infamous anti-vaccine propaganda film Vaxxed, which touches on the CDC whistleblower controversy, but mostly promotes anti-vaccine fearmongering. He is also proud of being the producer of The Doctors,[1] which he thinks is the "best medical talk show in the world." It is the best, you see, because it featured people that agree with him on his "vaccine skepticism" like Jay Gordon[2][3] and Jim Sears.[3]

Though he flaunts his show credentials to pretend that he has a qualified expert opinion and describes himself as a medical journalist, Bigtree is not a scientist,[4] nor does he have any credentials in any field of science.

For instance, he sent a letter to the U.S. Department of Health and Human Services detailing his "concerns" over "vaccine safety". Some of the tropes include complaining about the vaccine schedule being "overloaded" (the "too many too soon" gambit),[note 1] the lack of double-blind placebo studies[note 2] (without assessing the ethics of exposing subjects to a preventable disease; meta-analyses of epidemiological studies are also perfectly fine, but Bigtree doesn't like them), using VAERS

dumpster diving[note 3] to bolster the view that vaccine injury is more serious and common than it really is, and demanding that the vaccine committees be replaced with "vaccine safety advocates". Bigtree then threatened the HHS with a civil suit if they didn't comply with his ridiculous demands. Fortunately, Dr. Melinda Wharton, the director of the National Vaccine Program Office, responded to his demands, dunked on his claims, and denied action.[5]

Bigtree does not believe he is an anti-vaxxer.[6] Instead, he claims to be "pro-safe-vaccine." This is not an original argument.[7] The media frequently and inexplicably falls prey to this tactic and gives him undue weight, applying the labels "vaccine skeptic" or "controversial", as opposed to the more accurate "batshit crazy." Noteworthy examples of this include interviews[8] by The Daily Beast and NPR.[9]

As tends to be common among anti-vaxxers, Del Bigtree suffers from a massive persecution complex. Vaxxed gained notoriety after actor Robert De Niro promoted it at the Tribeca Film Festival (although De Niro backtracked and dropped it following public outrage). Bigtree also complained about being "99% censored" by ABC World News Tonight because they didn't show the entirety of their interview with him.[10] In March 2019, after giving a speech on the supposed perils of government mandated vaccines, he had the tastelessness to brandish the Star of David (because preventing unvaccinated kids from going to public school is exactly like being herded to your death because of your ethnicity). He and his anti-vaxxer friends shortly received swift condemnation from the Anti-Defamation League and Poland’s Auschwitz Memorial and Museum,[11] but refused to apologize.[6] Classy.

Unfortunately, invoking Nazi analogies also seems to be a trend among anti-vaxxers.[12] Other instances of this can be seen in Dr. Jim Sears[13] (who is featured in Bigtree's favorite show), Robert Kennedy, Jr.,[14] Age of Autism, and the Facebook group "Californians against SB 277"[15] Mind you, this is only one of the many false analogies that Bigtree's has used — vaccines have also been compared to rape, slavery, Apartheid, and human trafficking.[16]

Del Bigtree has also relied on inflammatory, and arguably, violent rhetoric to bolster his paranoid libertarian views on the big, evil government wanting to take away "choice", "privacy" and "control" over bodies or something.[17]

…but now we’re watching the most powerful lobby in the country and in the world poisoning our children. And our government is helping them. What are we going to do about it? We have the power. But we have got to stop being afraid to talk about it. If you’re afraid to talk about it, your Twitters, your Facebooks, I don’t want to bring it up at my PTA meeting, I don’t want to at lunch or at Thanksgiving dinner, then I can imagine those same conversations were happening in Nazi Germany among the Jewish people. Let’s not talk about it. I don’t want to bring it into my reality. It’s still 20 miles away. I’m still allowed in this theater, not that one. All I have to get is this little star. All I have to do is to sign this little thing saying that I’m not going to vaccinate because I think they’re dangerous — and they are dangerous. I’m just going to sign this paper. I’m going to let them put me in a log. At some point, they have gone too far.

Do you think it’s a good idea to let the government own your baby’s body and right behind it your body? That is the end for me. Anyone who believes in the right to bear arms. To stand up against your government. I don’t know what you were saving that gun for then. I don’t know when you planned on using it if they were going to take control of your own body away.

Bigtree is the founder (and current CEO) of the Informed Consent Action Network (ICAN),[18] which is an anti-vaccination advocacy group that ostensibly supports science-based inquiry (of course, that's an extremely charitable description). It promotes parental choice/non-medical vaccine exemptions[19] and vaccine hysteria (e.g. "aluminum adjuvants" in vaccines causing autism).[20] ICAN is largely financially supported by Bernard Selz and Lisa Selz through their Selz Foundation; the Foundation donated more than $3 million to ICAN and other anti-vaxx causes as of 2019. The Selz Foundation also gave $200,000 to Andrew Wakefield's legal defense.[21] The Selz Foundation also funded Bigtree's film Vaxxed, through the AMC Foundation.[21]

ICAN is affiliated with the law firm Siri & Glimstad LLP. Through legal filings and letters, th law firm has been intimidating any organizations that plan to require vaccination for employment.[22] ICAN has been advertising Siri & Glimstad's services on Robert Kennedy, Jr.'s anti-vaxx Children’s Health Defense website by stating, "If you or anyone you know is being required by an employer or school to receive a covid-19 vaccine, ICAN is offering to support legal action on your behalf to challenge the requirement."[22] Kerry A. Scanlon, a former Department of Justice official who now works in labor and employment law, thought that employers have a strong case for enforcing vaccination among employees.[22]

See the main article on this topic: COVID-19 pandemic

Bigtree has repeatedly spread fear-mongering about the coronavirus vaccine. After all, his entire life depends on unscientific concerns about established scientific topics.[25][26][27]