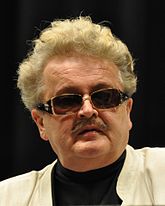 Heikki Juhani Grann (1944–), better known by his pseudonym Juhan af Grann, is a Finnish film director, scriptwriter and producer. His best-known work are "documentaries" about ufology and related conspiracy theories. In Finland, he was one of the best known popularizers of the ufology scene.[1] Besides his documentaries, what attracted attention was his flamboyant character and dress, mixed with unashamed self-promotion, claims about telepathic connections to aliens, claims of persecution, and doomsday predictions.[1] The surname style "af Grann" instead of "Grann" implies noble ancestry - no such noble family has been introduced to Finland.[2] Indeed, it is a pseudonym and he hasn't officially adopted it.[1]

Born in Joroinen, Finland, he worked as a journalist for the TV channel MTV3 until he was fired due to his confrontational nature and disagreements about content. Subsequently, he founded his own TV production company. In 1992-2002, he published four "documentaries" about ufology: Visitors from Space (1992),[3] UFOs & Paranormal Phenomena (1995), The New Apocalypse — Mankind's Last Exodus (1998) and Intruders (2002). Most of these present and recycle the common American or international ufological conspiracy theories. Obviously, he also received criticism, which he took very poorly, blaming the media of persecution.

According to Grann, aliens can possess a human, who then gains abilities like telepathy, clairvoyance and prophecy.[4] He claims to embody a mystical entity called "The J.A.G.", which makes him a messiah as a spokesman for this entity. As such, he has supposedly predicted many disasters and events in advance. Another claim of his is that aliens visit the Earth every day, and have placed "alien hybrids" to implement their conspiracies. He also was visited in Kuopio by gray aliens from "Reticum-4" (is this a misspelling of Zeta Reticuli or rectum? The latter might explain where these ideas come from) when he was four, and has been in contact with them in near Jaffa in Israel, if we were to believe him.[1] He claims the gray aliens abduct human fetuses.[5] He predicts that in the future, an Orwellian tyranny will be imposed on Earth, in which microchips will be implanted to humans for monitoring.