From RationalWiki
Jump to navigation Jump to search
Not to be confused with the Terra incognita. 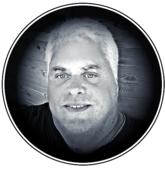 Headshot of the terran site owner, possibly as seen through alien binoculars.

Terran Cognito,[1] a.k.a. Obi-Wan Kabuki[No, not The Onion], real name William "Bill" Thomas Ferguson III, owns blogs named Terran Cognito and American Kabuki which are dedicated to covering conspiracy theories. The main blog was originally American Kabuki,[2] however, the owner is apparently too lazy to fix a simple website issue (which can be solved by the folllowing Unix command: $ replace "http:\/\/" "https:\/\/" *), so he bought a new domain and created a new blog instead.[3] The blogs are so obtuse and strange, it's impressive.

Oh, and if you see any blog posts mentioning Heather Ann Tucci-Jarraf, she seems to be a friend of Cognito. Most posts about her are about her status in prison. She has an equally obtuse website of her own.[4] Bill and Heather have a symbiotic relationship. His blog frequently asks for donations[5] in order to keep covering her trial and per his blog, he has been living off said donations for over a year.

By the powers of woo[edit]

In nearly every blog post, aura and energy bullshit is shoehorned in. Apparently, Cognito hears voices in his head receives messages from the cosmos.[6]

SA: THE METEOR THAT STRUC AND YES WE DO SAY STRUCK IRAN WAS MORE THAN A METEOR. IT WAS AN ENERGETIC SIGNATURE. NOT A WEAPON.

SA: IT WAS AN ENERGETIC SIGNATURE DEVICE THAT ALLOWS FOR CONTINUED INTERFACE WITH OUR AWAKE FRIENDS AND FAMILY AND OPERATIVES IN THE REGION. THERE IS SO MUCH MORE THAN MEETS THE EYE. OUR AWAKE FRIENDS ARE PREPARING THE GROUND SO TO SPEAK. END.[7]

Stone Person: WE DO NOT HAVE EXTERNAL VISION. WE TAP INTO THE ENERGY SURROUNDING US FOR THE INFORMATION WE NEED. WE FEEL THE NEW ENERGIES FLOWING AND NOW KNOW THAT OUR MOMENT TO RETURN IS ARRIVING.

Denice: (I can see a bit of their realm. . very grey and black and small)

Terran: In other words you "feel" the energies right?

Stone Person: YES. ACCURATE. WE SENSE THE SHIFT. AND ARE PREPARED FOR NOW.[8]

Nabrac: TERRAN. YES. THERE HAVE BEEN INCIDENCES OF ENERGY HARVESTING FROM DRAGON SPECIES AND MANY OTHER RACES OUTSIDE OF THE EARTHSPHERE. NABRAC.[9]

Loie: Bill, sending you a frequency for that. Loie.

Terran: What is his name? LOL was just going there!

Loie: Love, you have all the answers within! Let's have some fun now?

Something big is coming. I’m feeling it in the flow. Never felt anything this strong before.

Unlike most of the energies since 2014 this energy feels masculine in nature and will cause changes in everything. It will not stop until it’s complete.

It’s movement within the ALL

This prediction is so vague that it's pretty much true. 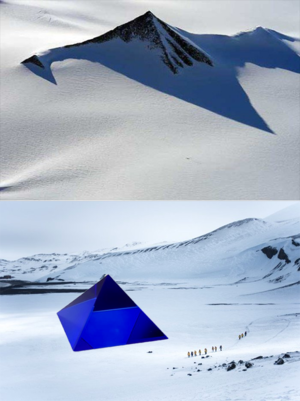 Top: A mountain
Bottom: A Photoshopped image of a conspiracy theorist's wet dream

This blogger likes Antarctica … a lot. Way too many blog posts are related to some kind of Antarctica conspiracy.

Nabrac: TERRAN. THE ENTIRE LANDMASS WAS INTENTIONALLY[sic] DEVELOPED WITH FORESTS AND WATER FEATURES AND SMALL "VILLAGES" AND LARGE "CITIES."

THE AREA YOU INDICATE IS AN ANCIENT RUIN OF A SMALL POST ATLANTIS GROUP. THE " GALACTIC BASE" WAS BUILT ABOVE THE RUINS. CONNECTED BY TUNNELS. UNNAMED. NABRAC.

Terran: Post Atlantis 1 or 2? If 2 were they survivors of [the sunken] Atlantis 2?

Terran: What galactic group built their base upon the ruins? Did they have conical heads?


Nabrac: TERRAN. THERE WERE MANY BEINGS WITH A VARIETY OF FEATURES. CONICAL SKULL SHAPE IS BUT ONE.

Also, this blogger reports pyramids located on Antarctica.[12] Of course, no one on this goddamn blog actually goes to Antarctica to investigate and collect evidence. Nonono. That would be too much effort. Bullshitting on a blog is much easier.

The Antarctica obsession converged with the Heather Ann-Tucci case in January, when Heather filed a large document[13] in her criminal case alleging that, among other things, she had taken part in secret meetings in Antarctica with world leaders.

Cognito posts a report about Sophia Love claiming to have telepathically communicated with E.T.:[14]

Terran note: The following was posted by Sophia Love August 23, on her subscription newsletter. I have asked for permission to post it here with data we got confirming what Sophia received plus some additional data on the Deep State behind all this. This post fascinated me for several reasons, it contains data I did not know, and it shows how "THE ALL" is working through even sentient beings that may loosely be called "manufactured" by those in the deep state who produce them. Nothing is as it seems....

Sophia claims she had a conversation with E.T. revealing that E.T. is a product of the American government:

Is there someone now who wants to connect?

Okay. Please introduce yourself and express why you've contacted me today.

Yes. I am a standard issue E.T. By this is implied I was manufactured and indeed I was. I am a product of your United States Government.

Do not misinterpret this to mean that the United States government is solely responsible for all "E.T.'s", for this would not be true.

In this case, and for this communication however, it remains a fact that I am a product of your own government. The United States was chosen as a matter of convenience however, only because it is the country from which you hail.

SA: NOW THE MANNER OF CATS. AS YOU KNOW THERE IS AN ADVANCED CIVILIZATION OF 5d/6d FELINES AND YES THIS INCLUDES THE LION PEOPLE AND SO MANY MORE. THERE ARE STRIPES OF MANY COLORS, WE SAY WITH JOY.

SA: THE FELINES YOU SPEAK OF ON EARTH WERE A GENETIC MARVEL. THE ESSENCE OF THE 6d CAN 'drop' INTO THE LITLE VESSEL AND REMAIN FOR EXTENDED PERIODS OF TIME. IN THIS MANNER A "CAT" ON EARTH IS A BIOLOGICAL INTERFACE UNIT, BUT NOT TECHNICALLY, AS A CAT DOES NOT COLLECT DATA, IT JUST IS.

SA: THE EARTH CAT TRANSMUTES ENERGIES, OFFERS PROTECTIONS, ERASES MAGICAL CONSTRUCTS, AND SO MUCH MORE. YOU WILL BE INTRIGUED BY THE MAGICAL COMPONENT WILL YOU NOT? HAVE YOU NOTICED THE CATS AROUND YOU BILL SINCE 1992? SO MANY HAVE COME INTO YOUR EXPERIENCE / AREA / AURA JUST TO BE WITH YOU.[7]

This blog is supported by its readers, and to a minor degree by Google ads. As the mainstream media fights for a shrinking ad revenue base, it has labeled new media as fake, hurting the ad revenues and search engine rankings of many good sources of news and information. The propaganda is not about truth, the main stream media[sic] is one of the worst offenders of fake news there is. Its[sic] about ad revenue in a shrinking economy,

Given Cognito believes in aliens and energy bullshit, it's clear why he has such a distaste for mainstream media.