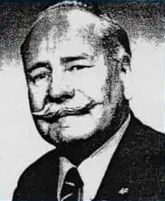 The stodgy old fart responsible for dozens of hateful screeds.

McKilliam studied in Australia before going to the University of London to study psychology and sociology. During World War II he served in East Africa and spent sixteen years on the continent as an Educational and Community Development Officer after the war.

During this time in Africa, he developed a belief in an international Jewish conspiracy that was trying to destroy the British Empire.[2] He subscribed to the British Israelist belief that the chosen people identified in the Old Testament were not the Jews but the British. He was also involved with the National Front and the BNP.[3]

A creationist, McKilliam believed the account given in Genesis of mankind's origins. However, he also held that "races of man-like creatures", called Chay Eretz, existed before God created Adam and Eve. He was also certain that Adam and Eve could only have been white:

Of course, anybody who has been to Hebrew school for even a day knows that the name Adam is in fact a Hebrew pun on the word "Adamah," which is Hebrew for "earth" or "soil," the supposed material of Adam's creation.

You can see where this is going.

McKilliam believed that Cain married one of the Chay Eretz, violating God's intentions. God caused the Great Flood to purge the world of human/subhuman hybrids, although some of the Chay Eretz were saved on the ark along with the other animals. Bringing up the curious story of the Curse of Ham, McKilliam claims that Ham was punished for copulating with a Chay Eretz. He did not provide evidence for this interpretation.[4]

The Captain went on to claim that subsequent warfare between the Israelites and the Canaanites was part of a divinely-ordained plan to wipe out Ham's hybrid offspring. The destruction of Sodom and Gomorrah, wrote McKilliam, was because of the cities' hybrid inhabitants[4] (makes a change from homophobia, if nothing else).

McKilliam used all of this silliness as an excuse to condemn present-day miscegenation:

International Financiers, political Zionists, International Communists and other aliens together with the fools they have indoctrinated are attempting to force the white race to integrate with the negroes and Asiatics who have been brought in for the purpose so that the Master Race shall have control over a society of mixed breeds.[4]

McKilliam held similar cranky beliefs about the causes of the first world war, blaming it all on a vast international Jewish conspiracy involving the Illuminati, freemasonry, secret societies, and the Rockefellers and the Rothschilds:

The 1914-18 conflict was not brought on by nationalist rivalries, as popularly supposed, but by sinister revolutionary forces operating behind the scenes.[2]

He concluded that Jews should not be allowed to work in the British government or police force:

The British Nation is bedevilled today by alien organisations that have established themselves within our Christian Nation and aim to take us over, to destroy our Christian culture and force us to follow their preconceived designs. Unfortunately they have infiltrated themselves into our educational and religious systems and have educated many adepts among our people who unknowingly carry out their will. Many of them have been advanced to high places... Being prohibited aliens by the Edict of Expulsion Jews have no right to sit in our houses of parliament, nor on our local government councils. They have no right to be in the judiciary nor to hold office in the executive of government nor in the police force. All purported laws and purported acts of parliament in which Jews have taken part in the voting are illegal, unconstitutional: null and void.[8]