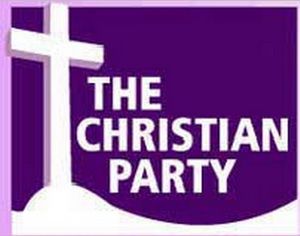 Nearly reaching the 1% mark of votes cast in elections for the Scottish Parliament and Welsh Assembly and gained nearly 20,000 votes in a UK General election, the Christian Party is being heard in some areas, but is a long way from actually taking a seat.

Their policies range from those on taxation, which are more right-wing than the Conservative Party (abolish progressive taxation & remove all income tax exemptions, while adding one for married couples) to the standard fundamentalist Christian views espoused by the Religious Right of America: no gay rights, no abortion. They believe in withdrawal from the European Union, compulsory voting and advocate decreased transparency in the banking sector (seriously). They're in favour of abolishing the National Health Service, but accept global warming as something we need to take seriously.

Below are some other gems:[1]