From RationalWiki
(Redirected from Beatles)
Jump to: navigation, search The fabulous mop-topped Scousers in New York in 1964.

The Beatles were a British rock-and-roll band that had a pretty good run during the bulk of the 1960s. The lineup consisted of John Lennon (1940-1980, a very talented but highly sarcastic asshole with views arty, left-wing, and "peacey" enough to get people to overlook the dickishness), Paul McCartney (born James Paul McCartney in 1942, a fantastic bassist, singer, and pretty-much-everything-ist with an obsession with corny love songs and [after his first wife died of cancer] a tendency to get into bad marriages), George Harrison (1943-2001, a good musician, lyricist, and singer who was actually pretty nice, even if he did have more of an India fetish than the rest and was a Hare Krishna), and Ringo Starr (born Richard Starkey in 1940, the drummer, sort of overlooked, depending on your opinion makes a living today either by acting like everybody's cool uncle or his inability to let people forget he was in the Beatles).

Despite his death, he went on to form the band Wings, has a very successful solo career, smoked a lot of weed, recorded the theme to Live and Let Die, got married a few times, produced a few animated films, wrote a few children's books, became a vegetarian, and was knighted by Queen Elizabeth II in 1997. His son, James Louis McCartney (b. 1977), is also a musician, apparently inheriting his father's talent for multi-instrumentalism.

The Beatles, being incredibly wealthy, were taxed 95% on their income from sales and performances. This inspired George to write the song "Taxman", which became the theme song of the tax protester. Somehow they still managed to scrape by despite only getting to keep 5% of their income. (It's almost like they had far more money then they needed or something...) 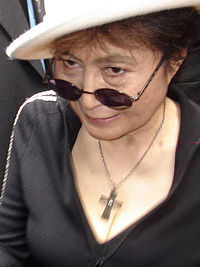 Yoko is a well-known political activist, promoting peace while denouncing sexism and racism. She was a part of the feminist culture that emerged in the UK and the US in the 1960s, challenging perceptions of women and their roles, and their need to fit into standards of appearance.

But there is a controversy that her progressive moves are hypocritical. She was in 1971, Japan with John Lennon's holiest site of the far-right ever to visit the Yasukuni Shrine.# and her cousin is Hideaki Kase

, who belongs to far-right ultranationalist lobby Nippon Kaigi. This is one reason why all criticism of her cannot be dismissed as racism or sexism.[note 4]

When the band first began achieving popular notoriety when performing in Germany, they were a quintet. Stuart Sutcliffe was the band's original bassist, but left the band to pursue a career as a painter. He died unexpectedly in 1962 from a brain aneurysm at age 21.