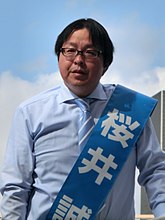 Makoto Sakurai (桜井 誠) (1972–), also known by his online handle Doronpa, is a Japanese far-right ultra-nationalist, netto-uyoku/alt-rightist. He is the leader of the Japan First Party

. He is somewhat like the Donald Trump of Japan.[1] but he's more like Richard Spencer than Trump. Makoto Sakurai is an alias, and his real name is Makoto Takata (高田 誠).[2] His Twitter account was suspended in November 2017.[3][2]

Makoto was the founder of Zaitokukai, which has been compared to Neo-Nazi groups. He was the head of the group from 2007 to 2014. Zaitokukai is an organization that makes direct violence against Koreans, though this has been limited to pushing and shouting.[4]

He has continued to make extreme hate speech about Koreans. For example, if you call them cockroaches or insist on killing Koreans, or criticize them in this regard, they say there is no problem because Koreans say Japanese should die.

Sakurai (real name Makoto Takata) started his career as a civil servant in a Tokyo ward office, where he spent much of his time trolling around online and becoming unhealthily obsessed with South Korea, calling "a rare country that one hates more the more they learn about it." Somehow his trolling managed to book him an appearance on a television program called Jene Jan (ジェネジャン) in 2005, where he was introduced under the pseudonym "Makoto Kimura" (木村誠, Kimura Makoto). Shortly thereafter, he founded the Zaitokukai.

Despite repeatedly insisting he would not enter politics, Sakurai announced his candidacy for the Governorship of Tokyo after the then-incumbent resigned over a finance scandal. His catchphrase was "Japan First" {{small|([[Donald Trump|sound familiar?)}} Among his platform promises were:

He is a politician who is considered a far-right populist politician even by ultra-conservative Japanese political standards. He is a Japanese supremacist who claims that the Japanese people's ethnic identity is diminished by foreigners coming to Japan, and insists that they should not be mixed with other people. It's comparable to the white genocide conspiracy theory. and he has a very extreme anti-Korean inclination.

While he is opposed to hate speech regulation, but he insists on regulating anti-Japanese hate speech by liberals in Japan.

Differences with mainstream conservatives in Japan[edit]

Nationalists such as Shinzo Abe and Yuriko Koike, who have encroached on Japan's mainstream conservatives, are close to the far-right by European and American standards, but tend to control the water level. Makoto Sakurai, on the other hand, tends to be similar to the typical American and European right-wing populist or alt-right. However, Makoto's inclination is closer to alt-right or Neo-Nazi, not right-wing populism alt-lite.

That's why mainstream conservatives in Japan are distancing themselves from Makoto Sakurai and think they are not extreme rightists.

In Japan, nationalism is common among mainstream conservatives, making it difficult for outsider ultra-rightists like Europe and the United States to gain huge popularity.

He had a dispute with Toru Hashimoto,[5] the neoconservative mayor of Osaka. Toru is also a very nationalist, but he is a mainstream conservative politician, so he opposes outright racism and, unlike Makoto, is in favor of racial-related hate speech regulation.

Incidentally, Sakurai still lives with his mother in Shinjuku, and runs a convenience store part-time.

This article is a stub.
You can help RationalWiki by expanding it.
Retrieved from "https://rationalwiki.org/w/index.php?title=Makoto_Sakurai&oldid=2218863"
Categories: