Ranting with a world map in the background must mean you have perspective.

His YouTube channel has 1.9 million subscribers and over 520 million views.[6]

During Donald Trump's election campaign Watson embraced the alt-right and considered himself a part of the movement,[7][8] apparently oblivious to its racist elements.[9] Watson had believed the genuine neo-Nazis were a "tiny, vocal, fringe minority of the alt-right."[10] Shortly after Trump's election victory, Watson began distancing himself from the alt-right when he realised many of them blamed the Jews for everything bad in the world and were not overly fond of non-white people.[11] He then dismissed the alt-right as "right-wing SJWs."[12][13] Since November 2016 he has completely rejected the label and seems to now hate being associated with the movement.[14] Watson, not one to shy away from a conspiracy, has suggested alt-right figure Richard Spencer may be an FBI informant similar to Hal Turner.[15] Even Watson finds Spencer to be extreme.

Watson has been trying (and largely succeeding) to convert fringe conspiracy theories into mainstream ideas for years. He often attempts this with misleading clickbait-y videos with titles like "The Truth About…" These videos never actually contain the truth about the things they are about; instead, they contain a mixture of misleading claims, baseless speculation, conspiracy theories, and outright lies.

To top things off, Watson has also shown an interest in spooky scary GWEN towers.[18]

He used to endorse the MGTOW movement, advocating "rejecting toxic women who have been brainwashed by cultural marxism" and recommending instead that all male viewers (no girls allowed!) visit Return of Kings and partake in the gospel according to Roosh V. He has since criticised the MGTOW movement, referring to them as "Men Groping Their Own Weiners." He also compared them to Incels, which is ironic giving that most of his fanbase are sexually-frustrated men.[24][25] 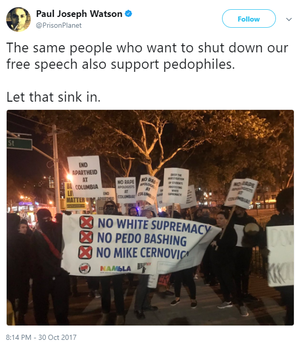 Watson tweeted a banner allegedly used by Antifa that features the NAMBLA logo:[27]

The picture was, needless to say, a hoax. The Antifa-NAMBLA banner was created by alt-right activists in order to (according to the photographer) "plant [a] NAMBLA-branded sign in front of protest march".[28][29][30][31]

Watson later created a video justifying himself, arguing that it's OK to lie because "antifa is degenerate scum".[26]

Watson published an article alleging that the "mainstream media" would reveal an explosive video of Trump saying racist and sexist epithets on a secret camera to try to derail Trump's inauguration. The problem with the story? It was made up by a Scottish marketing professional. How did Watson get the story? The Scotsman messaged Watson the story on Twitter as a prank. Without any effort to fact-check the story or even verify the identity of the leaker, Watson hurriedly typed up the story in the hopes of getting more clicks. Adding insult to injury, the article remained up for days after the prankster revealed his game, which shows Watson is the pinnacle of journalistic malpractice and fake news.[32][33] Watson also has the habit of sharing fake history memes. He claimed Islamic terrorists haven't kidnapped Russians since 1986 because Russia is so awesome and tough on them. He forgot the 2002 Moscow theater hostage crisis, along with other kidnappings.[34][35]

Watson can't decide what to do about paedophiles:

Watson can't decide whether the government should regulate the internet: 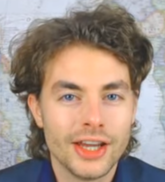 Surprisingly, a vast number of people believe Watson is actually a Zionist.[54][55][56] People assume this because he went on record saying that "[He doesn't] believe in this Jewish conspiracy because nobody presents any real, credible, hardcore evidence that it's taking place."[57]

That's all fine and dandy. After all, even crazy wackos can be rational once in a while, but this raises the question: why does he subscribe to other illogical conspiracy theories when they too lack any sort of concrete evidence… Probably because he isn't brainwashed by the deceptive mainstream shills working for the New World Order!!![58] As you should know, cranks aren't the most rational of people.

Genuinely surprisingly for someone who once coddled the manosphere, Watson actually mocked incels and pointed out lapses in logic many feminists have accused them of embracing.[59] He also criticised the Christchurch massacre and people who tried to defend it, even if he predictably went off in a tangent about the left after two (moderately sensible) minutes.[60] He's frequently criticised the US government's destabilizing actions and made a rather excellent video about how Biden's election would simply lead to more interventionism as usual.