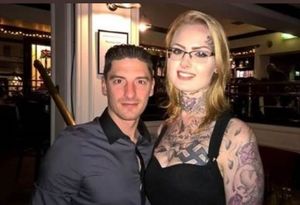 Mark Collett (1980–) is a British neo-Nazi[1] and prominent figure involved in the online alt-right who hosts the podcast This Week on the Alt Right. Collett is one of the most active white supremacists from UK and is a former head of publicity for the BNP. In 2019, Collett founded the white nationalist group Patriotic Alternative.

He joined the far-right British National Party as a teenager and was first chairman of the Young BNP until 2002. Collett was always a hardliner opposed to the modernisers in the party who wanted to moderate the BNP's policies and soften its public image to attract more voters as part of Nick Griffin's strategy to win local council seats. Collett in 2002 was exposed on camera (as part of a documentary Young, Nazi and Proud

) making pro-Hitler, racist and anti-Semitic comments and even describing himself as a "Nazi sympathiser". While he was disciplined by the BNP (Griffin removed him as chairman of the YBNP after Collett himself offered his resignation), he was not expelled and remained a member, although was sidelined. At the time, the BNP were trying to distance themselves, at least cosmetically, from their fascist past to gain popular appeal and Collett proved to be an embarrassment:

For the documentary Young, Nazi and Proud I filmed with Mark Collett, the then leader of the Young British National Party, for many months. We got on pretty well and he became increasingly keen on talking to me about his Nazi fantasies. The BNP were trying to claim that they were no longer racists and Collett was standing for election. His views directly contradicted the party's new image. In our last interview, with the camera running, I told him that I had recorded many of his pro-Nazi comments and that I intended to use them in the film. After the initial shock, and making a quick call to resign his position in the party, he continued the interview this time openly accepting that he was a Nazi sympathiser and tried to justify his views.[2]

In 2005, Collett and Griffin were charged with multiple offences of inciting racial hatred.[3] However, the following year both were acquitted of all charges after a retrial.[4][5] That same year saw the BNP win 33 local councilors, averaging a record 18% of the vote in contested seats; despite Collett's hardline white nationalist, virulent anti-Semitic views and his admiration for Adolf Hitler — he was promoted within the party becoming head of publicity. Collett stood as a BNP candidate in local elections but was not elected; in the 2005 general election for the BNP, he polled 4.1% of the vote in Leeds.

Collett stood shoulder to shoulder with the leader [Nick Griffin] when both were arrested for race-hate offences in 2005 and he was considered to be one of the BNP’s most effective speakers. He would deliver savage indictments of the ‘global conspiracy’ against Britain. ‘We’re the biggest threat to the corrupt political establishment,’ he told a BNP audience in 2007, ‘[the] traitorous white politicians who have sold us down the river.’ It was a popular message then, and in the lead-up to last year’s European elections, Collett refined it even further to communicate to the disgruntled electorate that the BNP was the ultimate ‘anti-politician’ party.[6]

In May 2009 when the BNP were campaigning for the European election, Collett was involved in printing leaflets with Winston Churchill on them. This backfired after it was pointed out Collett had said on camera: "He [Churchill] was a f***ing c*** who led us into a pointless war with other whites standing up for their race."[7] Collett later sparked a racism row after appearing on Radio 1 as a young member of the BNP and making racist comments about the black England footballer, Ashley Cole.[8] In February 2010, the BNP as part of Griffin's moderation strategy agreed to amend their constitution to allow ethnic minorities (including black and Asian people) to join, with Griffin proclaiming: "We recognise legal reality… they can't call us racist anymore."[9] This upset Collett and other hardline white nationalists in the party who wished to keep party membership for whites only; Collett led a "palace coup" of hardliners against Griffin for leadership but was sacked and then expelled from the BNP.[10] In April 2010, Collett was investigated by police for sending death threats to Nick Griffin.[11] David Modell, who made the documentary Young, Nazi and Proud, offers another reason why Collett and Griffin came to dislike each other; they quarreled over money since Collett didn't receive a paid salary. Instead, Griffin only allowed him to sell white-power music to BNP members (under the label "Great White Records"), and these apparently didn't sell well.

After being expelled from the BNP, Collett looked for a new political party to support and found the English Democrats. In 2011 and 2012, hundreds of ex-BNP members joined the English Democrats after the BNP collapsed electorally; former prominent BNP members who joined the EDs with Collett included Lawrence Rustem, Deirdre Gates, Chris Beverley, and Michael Barnbrook. This led the English Democrats to be criticized as "BNP mark 2" and infiltrated by the far-right.[12][13] Shortly after ex-BNP activists joined the EDs, the party collapsed like the BNP by losing its few elected councilors and its mayor; Peter Davies, the mayor of Doncaster who was elected as an English Democrat candidate in 2009, resigned in 2013, claiming there was a big influx of former BNP members and that this risked changing the public image of the party into something unacceptable and racist.[14]

Collett at some point in 2013 was attracted to the United Kingdom Independence Party despite Nigel Farage imposing a ban on former BNP members from joining. While Collett couldn't join UKIP, he now claimed to vote for them and encouraged white nationalists on his social media profiles to support UKIP. For PR purposes, Collett took a 180 degrees turn from his hardline white nationalist views and now claimed to support more moderate electorally-palatable populist parties like UKIP, writing on his Facebook profile in August, 2013:

Collett with his girlfriend were spotted giving out Vote Leave leaflets in Leeds city centre during the EU membership referendum. Vote Leave told Collett they wanted nothing to do with him and told him to stop giving out their leaflets because he was negative publicity for his ex-BNP membership and Collett's girlfriend had visible Nazi-Swastika tattoos.[18][19][20]

According to the ADL, Collett is a major alt-right social media propagandist and is associated with David Duke:

More recently, Collett turned to social media to promote himself and his views, aligning himself with the alt right in a clear bid to attract the attention of other young white supremacists. Collett hosts a variety of white supremacist podcasts on YouTube, including The Mark Collett Podcast, This Week on the Alt Right, and Alt Right 101... in March 2018, Duke featured an audio “panel discussion” with Mark Collett and “Eric Striker” (the pseudonym of a writer for the white supremacist Daily Stormer), promoting it with the headline “Terrific Trio Duke, Striker & Collett Together Exposing the Zio Drive to Destroy European Mankind!” According to Duke’s website, the three talked about “the based Negro gentleman Louis Farrakhan,” the “Russia Hoax,” the alleged Jewish role in immigration, the “Muslim problem in Britain” and more. (“Based” is a term of praise used by the alt right to describe someone who has escaped the pressures of so-called “political correctness” and/or “Jewish influence.”)[21]

The Fall of Western Man[edit]

Collett is the author of the book The Fall of Western Man that argues for the white genocide conspiracy theory and that western civilization is in decline because of low fertility levels, feminism and non-western immigration. Like alt-righters in general (e.g. Tara McCarthy, Emil Kirkegaard and Michael Coombs) Collett is particularly obsessed with promoting the "White people need to increase their fertility rate above sub-replacement fertility" message and have at least two children, despite being 39 years old and only has one child. Collett's poorly written book is also filled with anti-Semitism and homophobia.

Noted British nationalist Joe Owens has argued that Collett had become an agent provocateur on behalf of Hope not Hate, and that he tried to undermine the Leave campaign by campaigning on their behalf in Leeds along with his girlfriend, who has swastika tattoos. This was done, claims Owens, with the intention of discrediting the Vote Leave campaign by linking it to Nazism.[22]