This is a sister page to the main alt-right glossary page, designed to cover alt-right vernacular from languages other than English. Note that it is not a translation handbook and only includes items that have no direct equivalent in English.

A derogatory term for a leftist man, alluding to the urban legend of tap water being harmful to men for containing traces of e.g. estrogen. The "original" hanavesigoblin was a member of the Left Youth of Finland that piqued the curiosity of Ylilauta users for reasons unknown. Compare to "soy boy" in English.

Etymology/translation: the word "homma" ("the job", "the task")

Originally referring to the website Hommaforum, created by visitors of the guestbook of then-blogger Jussi Halla-aho, homma may now be used as a shorthand for anything or anyone critical of immigration.

The European Centre of Excellence for Countering Hybrid Threats

(Finnish: Euroopan hybridiuhkien torjunnan osaamiskeskus, “Hybridikeskus”) is a Finnish tax-exempted think tank founded in 2017 under the auspices of the European Union, meant to help defend Finland and other member states from hybrid warfare. In the alt-right characterization, it is a prime actor in trying to keep the common internet Nazi down, depress birth rates (feeding into fears of white genocide), increase public support for multiculturalism and/or immigration, what have you.

A slogan of the Finnish Resistance Movement.

Mostly used of people or movements in the context of preserving Finnish culture against creeping sharia or such.

Introduced by the fake news website MV-lehti (currently MV-media) in the wake of the immigration crisis in September 2015,[1] matu has largely supplanted the much older and less blatantly racist mamu (maahanmuuttaja, "immigrant") in circles where non-casual racism is common.

A white woman who sleeps with non-white men. Compare with "Coal burner" in English.

Etymology/translation: "I am unable to breathe"

A protestor in 2015 lying on the ground surrounded by several members of the police claimed not to be able to breathe. It is not uncommon to see people mentioning being appalled at e.g. racist behavior get comments of e.g. Pystytkö hengittään? ("Are you able to breathe?") online.

Roughly equal to the English degeneracy, although with added implications of active encouragement and intent.

Etymology/translation: "the tar of the slave ships"

A strawman of a supposed argument suggesting that Finland was also responsible for African-American slavery by supplying tar to seal the hulls of the ships used to transport slaves. Whether or not anyone has ever made this argument seriously is ambiguous.

A figurative line that, once passed, makes it impossible to distinguish parody from a legitimate opinion or action. Compare with Clown World in English – note that unlike the English counterpart, parodiahorisontti also sees some use outside alt-right circles.

Less commonly partavauva (~"bearded baby"), the term refers to instances of asylum seekers lying about their age to receive preferential treatment or benefits that they otherwise would not be privy to — a universal phenomenon at border control points and asylum-seeker living spaces in the alt-right characterization.

A denigrating name for conscripts that were used for additional border control manpower during the 2015 refugee crisis, particularly in and around Tornio on the Swedish-Finnish border. Jokes about carrying the luggage of the "invaders" in future conflicts or refugee crises abound on the Finnish internet.

Not being able to say nasty stuff about minorities and people on the opposite side of the political spectrum without the authorities taking note is a definite sign that the police is biased toward your ideology, of course. /s[note 1][note 2]

A reference to the claim that non-white ethnicity gives a person treatment (e.g. in criminal investigations) that is different from the treatment of white people, e.g. making it less likely that identifying marks are released to the public. The neologism Coulter's Law is a somewhat similar niche expression in English.[4][note 3][note 4][note 5]

Anyone not opposed to immigration and minority rights etc. may be called a suvakki. A common compound word is suvakkihuora (huora meaning "whore") to refer to women opposed to alt-right ideas in particular.

The Sámi (saamelaiset) often get accused by the Finnish alt-right of e.g. not operating under the same "rules" as the rest of the Finnish population. Some examples include Sámi activists warning against cultural appropriation of their traditional attire, as well as limiting the right to vote for representatives to the Sámi autonomous council. The emergence of a slur patterned after the "[X] nigger" template is thus hardly surprising.

Etymology/translation: "This is (exactly) what they are escaping from"

A phrase to convey the sarcastic suggestion that any and all crime by immigrants/asylum seekers should be left unpunished, because the perpetrators themselves might be subject to crimes similar to their own back in their country of origin.

Etymology/translation: either "vale" ("lie") or "valheellinen" ("false") and "oppositio" ("opposition")

A denigrating term for the Finns Party, used by those that do find the party racist enough for their purposes and claim that it is merely a "honeypot" to prevent genuine far-right movements from gaining traction.[note 6][note 7][note 8]

An onomatopoeia apparently conceived on Ylilauta, usually given as a response to a user asking for the source of a statement or (")news(") story, or more generally to anyone challenging common alt-right talking points, sometimes pre-emptively (similar to inb4).

Used of crimes committed by immigrants or asylum seekers, as well as occasionally the perpetrators themselves. Possibly among the oldest words of the Finnish alt-right lexicon, with possible examples dating as far back as 2005[11] and 2006[12].[13]

Any discussion critical of minorities/immigration/globalization/etc. can be designated as öyhötys. The word appears to have been originally denigrating, but it was later adopted by those accused of doing it.

El Risitas is the name of the meme regarding a laughing Spanish man. In most countries in the world, it is perfectly benign, but in France, Canada and Switzerland Risitas is often used as a dogwhistle by alt-righters, white supremacists, edgelords and Conservatives similar to Pepe The Frog. It has to be noted, however, that much like Pepe, but to a larger extent, people may post about this meme without the intent of communicating with alt-righters.[14]

See the main article on this topic: Media was wrong before

Lügenpresse is a German word meaning "lying press," effectively a synonym of "fake news". Lügenpresse is used by PEGIDA, Richard Spencer,[15] and the like to mean "media that isn't racist". The term was originally popularized by the original minister of Nazi propaganda, Josef Goebbels,[16] but the term preceded the rise of Nazism in Germany and was used in World War I to refer to enemy propaganda.[16][17] 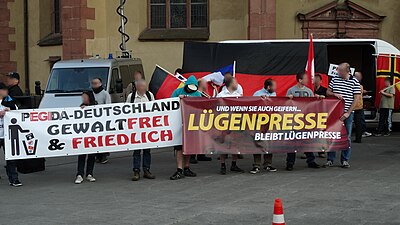 Can be seen on the twitter descriptions of Irish twitter users following the Generation Identity movement. Due to white nationalists' tendency to be gobbers, they used the wrong word. Aitheantas means identification. If they had a clue, even cared one damn about their identity they'd get it right. As with most identitarians they are more concerned with the removal of foreigners deemed undesirable than the preservation of any identity.

Much of the online alt-right activity in Norway can be seen on Resett.no and similar sites. Because knowledge of English is good, many terms are simply copied from the American alt-right, but some appear unique to the country.

Det gode hatet ("the good hate") is mockingly used to accuse people of color of being racist themselves, or used mockingly to accuse anyone of being too politically correct.

the leader of the "Progress Party", to refer to the Eurabia conspiracy theory. It has subsequently been taken up by xenophobic groups such as SIAN. The word, of unknown origin, was first identified by the Norwegian Language Council (Språkrådet) in 2009.[18]

The Spanish publication El Español has a great article explaining vocabulary of the alt-right of Spain.[19]

Per the Spanish website Forocoches (cited in El Español), a charo is a woman "with short hair, dyed red or purple, who said she doesn't need a man in her life, and on reaching 35 or 40, alone and burned-out on life, falls into a depression that will stay with her for the rest of her life and results in an addictions to Prozac, alcohol, Marlboro, and her cats."[19]

"Lo País" is part of a Spanish rightist trend to replace gendered pronouns ("El" or "La") in the title of left/moderate publications with a genderless pronoun ("Lo"). So to mock both the newspaper El País as "Lo País",[19] and similarly for Lo Diario, Lo Sexta, Lo Vanguardia, Lo Periódico de Cataluña. It would seem to be both mocking the publication itself, as well as the proposal for gender neutralization of the Spanish language.[20]

"The little offended one", a combination of the word "ofendido" (one who is offended) and "-ito" (the dimunitive ending). Basically equivalent to the American term "snowflake".[19]

An allegation that non-rightists seek (or do) rule Spain by a system of feelings rather than rationality.[19]