Dionaea muscipula, the venus flytrap.
Not to be confused with Carnivora

, the order of meat-eating placental mammals.

Carnivora™ is the brand name of yet another pseudoscientific herbal dietary supplement (the manufacturer prefers the term nutriceutical) that dances around the law prohibiting hyperbolic claims for such things. Easily confused with the Latin name for the order of meat-eating placental mammals,[note 1] this is an extract of Dionaea muscipula, the venus flytrap, a species of carnivorous plant. The active ingredient is plumbagin. 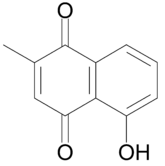 The main claim is support for the immune system. It is not a cure for cancer —oh no.[note 2] However it "selectively responds to abnormal cells" (nudge, wink).

The original research behind this extract began in the late 70’s by Dr. Helmut Keller, an oncologist. He was frustrated with the dismal results from the traditional oncology treatments. After purchasing a bouquet of flowers for his wife, he haphazardly noticed the activity of a Venus Fly Trap [sic] and a bell went off in his head. If this carnivorous plant could digest insects without harming its own cells, it must possess a very powerful Immune System.[2]

Many other organisms include insects in their diet, so it's unclear why the Venus fly trap should be better at combating cancer than a toad or a shrew. Even humans can eat insects for safe consumption.[3]

Additional claims are in the category of "at least it can't do any harm", viz:

Contrary to the claims, plumbagin was known to be mutagenic to Escherichia coli since at least 1985.[4]

The American Cancer Society (ACS) information page points out that:

Most of the studies done on the herbal extract were conducted by the physician who patented the drug [sic] Carnivora, who also has a large financial stake in a clinic that administers the drug and in the company that manufactures the drug.[6]

The overnight woo-radio show Coast to Coast AM in the United States and Canada, justifiably taking its audience as extremely gullible, heavily promotes Carnivora™. The script emphasizes that "in the 1980s, only President Reagan himself could obtain Carnivora".

Other companies sell or promote extracts of Venus fly trap. VFT-100 is a herbal preparation claimed to "safely digest and shrink the causes of many diseases", as well as to "increase or normalize body temperature" and "dramatically increase a sense of well-being and energy".[7][dead link]

Another online vitamin store offers Venus fly trap extract as either injection or topical treatment for "the treatment of several forms of cancer, multiple sclerosis, ulcerative colitis, chronic arthritis, herpes infections, and even AIDS". Worryingly, it notes that injecting venus fly trap may have side effects including "fever, vomiting and nausea",[8] which puts paid to the lie that herbal medicines have no side-effects.