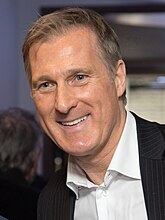 Maxime "Mad Max" Bernier (1963–) is a Canadian businessman, lawyer and demagogue leader of the People's Party of Canada. Bernier is one of the nastiest political figures in modern Canada, an immigrant-hating, race-baiting, climate-ignoring and overall crazed wingnut, who is basically Jordan Peterson ramped up to x100, sprinkled with flavourings of Stephen Harper. After getting narrowly edged out in the 2017 CPC leadership election, Bernier threw a fit, left the party, which spiralled into a verbal war with new leader Andrew Scheer.

Originally representing the libertarian bloc of his party, he went full-on trendy mode and snapped into rigid bomb-tossing populism by late 2017. Unfortunately, populism, especially right-nationalist populism, is a bit of a tough gig in Canada. Polling generally shows that a majority of Canadians usually support current levels of immigration to the country and that they appreciate "the benefits newcomers bring to the economy".[3] But like anywhere, every few election cycles or so, people get grumpy. Enter Maxime Bernier. Unlike his populist folk around the world, Bernier got utterly trashed in his election and served as an advent as to how extreme right populism can begin to fail miserably. Either way you slice it, he should be seen as a cautionary tale as to why it may not be a great idea to start a new political party out of spite.

Because you will probably lose.

Maxime Bernier had the generally solid upbringing and career that one would expect of the son of a well-connected, well-known public figure in Quebec and in national Canadian politics. He went to law school, was called to the bar, yada yada. Nothing to see here basically.

Bernier became the MP for the federal riding of Beauce as a member of the Conservative Party of Canada in 2006, a seat which he held until 2019 (more on that later). During these years, he fell in and out of favor with the CPC leadership and Prime Minister Stephen Harper bounced him in and out of cabinet portfolios, but generally, he towed the party line and took "ones for the team", so to speak.

During his time as a cabinet minister, his most distinguished achievement, which also ended his cabinet career, was the time he left classified government documents at the apartment of his then-girlfriend Julie Couillard, who had ties to organized crime and biker gangs. He was bounced from the cabinet in 2008 for the transgression but was brought back in a more junior portfolio in 2011.[4]

Growing weary with the state of right wing politics in Canada, he decided to mix things up a bit and run for the leadership of CPC in 2017.[5] This is where things started to go slightly off the rails for him. Despite his overall eccentricity, he was the favoured candidate throughout the election period, winning ballot after ballot. He only lost in the final one against Andrew Scheer, the latter winning with 51% of the vote. Scheer would go on to lead the Party until 2020, initially placing Bernier in cabinet.[6]

FOR THE PEOPLE!! Complete with a cult, and wacko mentality, AND founded on salt. What could go wrong??

How to start a new political party and succeed:

As you can see above, Bernier did absolutely zero of these things.

The 2017 election: Close to be sure, but perhaps this slight edging out and upset victory for Scheer riled poor Maxime Bernier up, because for the rest of eternity, Bernier could never really get over this fact, and he continually threw tantrums (and is still throwing them) at Scheer and just about everyone else soon after, telling them that he was taking his ball home.[8][9][10][11] Bernier, at the same time, had decided that he was writing a book, claiming that Scheer only won by "fake conservatives". He later pulled the book's publication because he is a coward.[12] Bernier's entitlement to power gave him the wild assumption he had lived through being party leader for a full term, let alone as Prime Minister, and had the big boy conviction to write an expose-all book. When he got called out for acting like a salty asshole, he decided to fall back. Bernier, however, would begin to care less and less about dignity after this point.

Utterly blowing his lid off, Bernier left the Conservative Party and in September of 2018, announced he was forming his own party, the new People's Party of Canada.[13] Already a terrible descent to make a populist-exclusive party in Canada, not everyone was excited as big old Max about this new move. Even Glorious Dear Leader Stephen Harper called him a sore loser.[14] What a colossal L! He managed to out-Harper the actual Stephen Harper! Not only did this prove Bernier's inexhaustible cave of salt was real, it then sparked the immense worry that the PPC would split the right-wing vote, a touchy subject for Canadian Conservatives, when many people (such as those angry at Trudeau for the SNC Lavalin scandal, spending, publicity stunts, arms sales, and other such issues) really wanted Trudeau gone. Not a great start, putting it lightly. But, alas, it then comes to "Good, sensible, outspoken groups on social media" he inadvertently sparked up. Understandably, this freaked out many Canadians, who are bordered by the USA (which was being run by Donald Trump), where Bernier now had that same rank and file of extreme far right followers, who treated Bernier like a messiah. The only difference is that the most political spectrums of the world, including Canada's, were not naturally skewed to the right like the USA; Bernier assumed that he could run in fists-flying without attempting to set up a breeding ground for his brand of populist-extremism.

The PPC pledged to run a full slate of candidates in all of Canada's 338 ridings in the 2019 federal election. While commendable, this pledge led to many problems for the PPC, most of them played out in national media outlets, as Canadians tried to figure out where this new national political party suddenly came from.

After some investigating, reporting began to show that signatories to the party's formation documents, officially submitted to Elections Canada, included a "former leader of a U.S. neo-Nazi group, a former Soldiers of Odin member and a Pegida Canada official".[15] It happens, one guesses. The party, as expected, can chalk it up to "growing pains". Orrrr something.

As the election played out, Canadians generally took little notice of the party, but somehow Bernier was allowed to participate in two nationally-broadcast leaders' debates. His performance in these contests was described as "more vandalism than art" by the Washington Post[16], and the only person in the Canadian political landscape generally supportive of this new party seemed to be Christie Blatchford[17] (for those outside of Canada, this is inching towards the Lauren Southern end of the scale).

But already unimpressive polls and bad press weren't enough for Maxime Bernier. He was eagered up to spread his nationist-populist crank to everyone in Canada by any means possible. What was Max's genius strategy? From a moment of his boundless mental obtuseness came this: 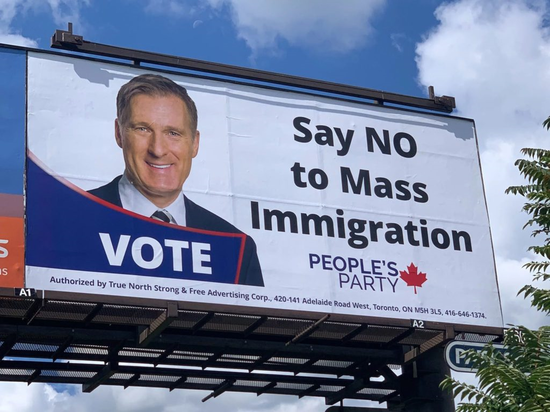 What a way to alienate an entire nation. It is SO obvious that Bernier himself thought of the brilliant idea to set these billboards up, but even this was a new peak of stupidity. He didn't even realise (or bare-face ignored) that Canadians are fine with current immigration levels. Expectedly, not a while later, the Pattison Outdoor Advertising company took them back down due to the backlash.[18] Classically, he denounced the backlash on Twitter as the "totalitarian leftist mob"[19] (Just like another Canadian guy does), and came up with a random "two-thirds" statistic for those agreeing with the message on the billboard, a complete asspull.[20]

BUT IT GETS BETTER! The comedians of Canada decided that they would fire back with either photoshop skills or sheer man power:

Mad Max clearly didn't pick up that the Republican days of Harper were long gone. With Harper, Scheer, the Conservatives, and every other party in Canada against him, Bernier was going to war allied only with his personal internet army, and the neo-nazis of course. Real tough stuff to contest an election with... 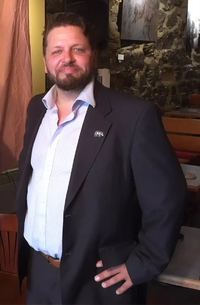 Bernier II (Rhino Party), the hero we had, but didn't deserve

Despite the vocality and ferocity of his Youtube/Twitter cult, Bernier was subdued in a single day by the Canadian populace. He lost his own seat to the very Conservative Party of Canada he defected from, logged an impressive thirty point drop from his 2015 election result, and no other PPC candidate won more than four percent of the vote. Nationally, the Canadian Press wire service reported that the PPC received 1.6 percent of the national vote, or around 300,000 votes in total.[21] Indeed, 1.6% is still a serious waste of useful votes that could've contributed to Trudeau's removal, but it would not have been enough for the CPC. Still, Utterly wasted. The CPC is fuming, and they can blame it on more than just Scheer's dullness now.

Rhino Party to the rescue[edit]

Seeing an opening to sagely comment on what Bernier had become, The Second Rhinoceros Party

ran their candidate, also named Maxime Bernier, in Bernier's riding of Beauce. Neither Bernier won, but it should be noted that the Rhino's Bernier actually won 1.8% of the riding's vote total, besting the Peopleless Party of Canada's national percentage take.[22] This unto itself should, one hopes, serve as testament to this entire election shitshow caused by Bernier.

Bernier is still around, mostly posting things on Twitter it seems. But a lot of this stuff is hard to walk back from, especially not if you are STILL throwing temper tantrums, going as far as to call Erin O'Toole a "fake conservative"[note 1] because you could not let the fuck go three years onward.[23]

And that serves to be the biggest lesson of all, that is, everything he has shown since getting even slightly angry. If anyone reading this aspires to hold national public office and have a semi-respectable public career, you should:

But wait! There is more. In September 2020, it emerged, to the surprise of fucking nobody, that Bernier was aiming to run in one of the Toronto-area byelections, after the resignations of two Liberal Party MPs.[24] For all his talks of the "radical/totalitarian left", Bernier genuinely looked like a guy who just wants power for power's sake. Not to worry though, because Bernier got fucked even harder than in the 2019 federal election, with a 23.5 point drop and a pathetic 642 votes, with the only achievement worth noting is defeating the Green Party. The Green Party.[25] Bernier's brand effectively died with this stunt. Good riddance too.

And the hits just keep on coming! As what can only be seen as a "ramping up" by the PPC to run in the 2021/22 Canadian election cycle, the self-inflicted wound "media" department at PPC HQ has roped in an impressive line up of prominent African American sports figures to support their (apparently) new 2021/2022 campaign slogan, "It's OK to be White", which isn't racist at all. Michael Jordan and Tiger Woods never looked so good! 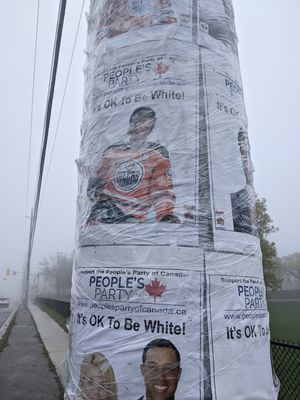 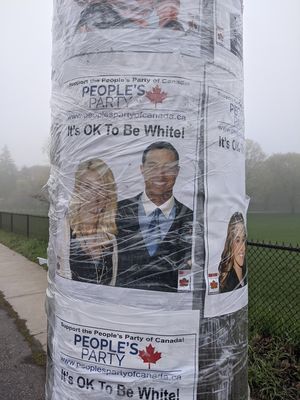 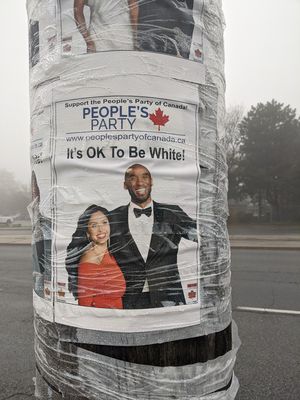 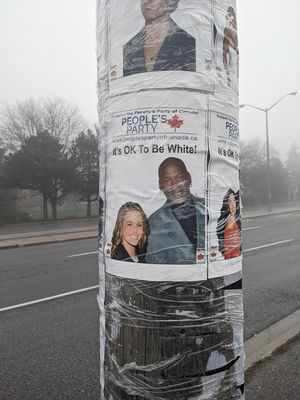