Mohammad bin Salman (1985–), colloquially known as MBS, is the Crown Prince of Saudi Arabia, and effectively the supreme leader of the country on behalf of the aging King Salman, born 1935.[note 1] Besides bin Salman being a relatively young man,[note 2] MBS is considered both a hope and curse for the endless turmoil in the Middle East.

So far, his career as a politician has been tumultuous, sometimes devastating, and polarizing at best. He was appointed Minister of Defense in 2015, and subsequently launched the invasion of Yemen which lead to the disarray and humanitarian disaster in the country. He is also considered as among the culprits of Saudi involvement on proxy wars against Iran across the Middle East including Syria where they support Jihadist rebels.[3][4] This was followed by failed attempt to restore Saudi and OPEC monopoly in global oil markets, bloating the national spending to $100 billion a year to no avail.[3] Since 2016, he began announcing several massive economic projects under the catchphrase Vision 2030 in late attempts to diversify the oil-dependent economy, foster privatization, and attract investors worldwide. After being appointed Crown Prince in July 2017, the country was involved in several diplomatic crises with Qatar and Lebanon. Later on, the country initiated much awaited domestic reforms on social and religious affairs, including the removal of the ban on female drivers. Later that year he carried out a massive purge against the so-called old guards of the royal family, and government and business establishment, which took a form of the anti-corruption campaign and lead to even bigger consolidation of power and seizure of the large number of assets.

His authoritarian thrust continued in 2018, with some but not exhaustively include the arrest of seven feminist activists,[5] highly-publicized and meaningless feud with Canada,[6] possible death penalty for a prominent Sunni cleric,[7] criminalization of online satire with a maximum five years sentence,[8] and ordering the murder of a Washington Post journalist critical of the government.[9]

On a positive note, indeed it seems MBS is rather serious about opening up the country and tackling the notorious Islamic fundamentalism. One of the lasting achievements may be the crippling of the religious police

known as the Mutaween (model of notorious Sharia patrol

in UK), which no longer have powers to arrest young'uns for merely mingling at the mall. He also managed to take the status of women's rights in the country from the 7th century to 17th century, with allowing women to drive (but only after imprisoning the women who agitated for driving rights; power comes from above not below), attend sporting events, join military [10], uplifted hijab mandatory and obtain government services such as education and healthcare without the need of male guardians (wali

). He also eased the restriction on entertainment such as re-introducing cinemas to the country and on issuing tourist visas to foreigners. Bizarrely (because of Wahhabi aniconism

), the entertainment industry now comes third in government funding after the petroleum sector and the military budget.[11] He blamed all the fundies for the Iranian revolution and said that the past 30 years was "not normal" which is absolute bullshit, considering Wahhabism existed since the dawn of the country's history. He is also trying to "bring back" moderate Islam, without any clear pathway of doing so. All in all, it smells of a PR stunt capitalizing on the low bar of the country's political goals, but it remains to be seen how it goes.[12][13]

MBS has been showcasing classic displays of authoritarianism. The purge, in which as many as 500 people were detained,[14] is considered eerily similar to what happened in Russia and China at the hands of Putin and Xi, respectively. Among analysts, it is obvious that MBS and his ilk have been involved in similar corruption and nepotism as well, but only the factions that lost the power were prosecuted as such.[15][16] MBS, being a classic hypocrite, purchased $500 million yachts and is considered the true buyer of Leonardo da Vinci's Salvator Mundi which sold at $450 million right after the purge. On a related note, it is not entirely clear how MBS can pull off his ambitious Vision 2030 agenda without the help of all the business moguls currently arrested and confined at the Ritz-Carlton hotel.[17] Since his accession as Crown Prince, human rights conditions in Saudi Arabia, which already has been in the toilet, has gotten even worse due to persecution, arrests and the crackdown on activists, academics, and preachers.[18][19]

The lasting damage MBS has done to humanity has to be his ventures on the proxy war against the Ayatollah. His war in Yemen can be compared side by side with Dubya's Iraq War:

Houthis have been launching Scud missiles to the perimeter of Mecca, which shows the extent of MBS' achievement. The only reason it gets less coverage than the Syrian Civil War has to be due to the war having no "good guys" with its main enemy Houthis being an antisemitic Iranian proxy much like Hezbollah. MBS also hastily prepped up an coalition of the willing anti-terrorism coalition known as Islamic Military Alliance which is just pure bullshit, with some of the members don't recognize their membership.[20] In 2018, a school bus in Yemen was hit by deadly airstrike and killed 50 including 41 children, leading to international outcry.[21]

Saudi was also a known black curtain behind the Jihadists hijacking Free Syrian Army (FSA) and turned the civil war into quasi-sectarian conflict. Saudi escalated its arms supply after November 2015 when Russia intervened to help the moribund Assad. The Independent described MBS "the most dangerous man in the world" for orchestrating these stunts.[22]

MBS ordered the murder of Jamal Khashoggi, a Washington Post journalist and Saudi in-exile in the United States.[23] The murder reportedly occurred in the Saudi embassy in Turkey, and his body was reportedly dismembered and flown out of the country.[24][25] Following the release of the long-delayed report on the murder of Khashoggi,[26][27] Reporters Without Borders filed a complaint with the German prosecutor, alleging that MBS committed crimes against humanity, also accusing Saudi Arabia of unlawful killing, torture, enforced disappearance and persecution.[28] 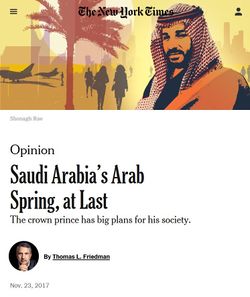 So wrong not funny.

Lately, MBS has been a darling of alt-right and neocon pundits. Alt-righters consider MBS as an answer from the Middle East to the hard-line approach on extremism by Donald Trump,[29] which is absolute horseshit, considering the fact that MBS' appointment as Crown Prince was already predicted back in 2015.[30][note 3] The fact that Trump seems okay with MBS doesn't help.[31] Some neocons who praised MBS includes tea party wingnut Michele Bachmann[32] who credit MBS's ascension on "Christian prayers", and Thomas Friedman of the New York Times who called the purge Saudi Arabia's Arab Spring,[33] which is more absolute horseshit. Arab Spring was a popular movement demanding democratic reform, while MBS' purge is a classic power grab by a dictator. Big difference.