From RationalWiki
(Redirected from Nanjing massacre)
Jump to: navigation, search

The Rape of Nanjing or Nanjing Massacre was a wartime atrocity committed by Japanese soldiers in between December 1937 and March 1938[1] during the Second Sino-Japanese War, following their successful invasion and capture of the city of Nanjing (南京, usually Anglicised as Nanking at the time) which was then the capital of the Republic of China and a Special Administrative District.

During the following massacre, between 250,000 and 300,000 civilians were commonly quoted as being the number killed (including disarmed POWs), and according to Western witnesses 20,000 women were raped.[1] The Japanese invaders also raped men, children, and the elderly, mutilated and murdered many of their rape victims, and forced some families to engage in incest.

The carnage was so bad that the local Nazi leaders

decided to intervene and put a stop to it.

In Japan, the episode is called Nanking Jiiken (なんきんじけん) or "Nanking Incident".

With the outbreak of the Second Sino-Japanese War

in mid-1937, the armies of Imperial Japan (IJA) smashed through northern China, quickly capturing the old Chinese capital at Beijing (then commonly anglicized as "Peking"). After capturing Shanghai later that year, the door was opened for Japanese forces to travel up the Yangtze and attack the Nationalist government at its seat of power in Nanjing.

The Nanjing Massacre is far from the only example of Japanese wartime atrocities; the Imperial Japanese Army encouraged a policy of intentional savagery, hoping the horrors they unleashed would break the will of the Chinese partisans.[2] It is only so well documented due to the presence of Western noncombatants who recorded what they witnessed.

Immediately following the fall of Nanjing, Japanese soldiers slaughtered thousands of Chinese soldiers who had surrendered to them. They then rounded up hundreds more POWs and civilians from the city and transported them outside the city's Taiping Gate to blow them up with landmines or burn them alive after dousing them with gasoline.[3] The following six weeks of Japanese occupation in the city became even worse. IJA soldiers were encouraged by their officers to come up with ever more inventively awful ways to kill Chinese civilians. As Iris Chang wrote in The Rape of Nanking:[4]

Many soldiers went beyond rape to disembowel women, slice off their breasts, nail them alive to walls. Fathers were forced to rape their daughters, and sons their mothers, as other family members watched. Not only did live burials, castration, the carving of organs and the roasting of people become routine, but more diabolical tortures were practiced, such as hanging people by their tongues on iron hooks or burying people to their waists and watching them torn apart by German shepherds. So sickening was the spectacle that even Nazis in the city were horrified.

Things got so bad that John Rabe, a German businessman and Nazi, teamed up with other foreigners to establish a "Safety Zone" where they could attempt to keep civilians safe.[5] As Rabe wrote in his diary,[6] he and the other Europeans and Americans lived in constant fear of the Japanese despite being theoretically safe:

All the shelling and bombing we have thus far experienced are nothing in comparison to the terror that we are going through now: There is not a single shop outside our Zone that has not been looted, and now pillaging, rape, murder, and mayhem are occurring inside the Zone as well. There is not a vacant house, whether with or without a foreign flag, that has not been broken into and looted.

…No Chinese even dares set foot outside his house! When the gates to my garden are opened to let my car leave the ground… women and children on the street outside kneel and bang their heads against the ground, pleading to be allowed to camp on my garden grounds. You simply cannot conceive of the misery.

I've just heard that hundreds more disarmed Chinese soldiers have been led out of our Zone to be shot, including 50 of our police who are to be executed for letting soldiers in. The road to Hsiakwan is nothing but a field of corpses strewn with the remains of military equipment. The Communications Ministry was torched by the Chinese, the Y Chang Men Gate has been shelled. There are piles of corpses outside the gate. The Japanese aren't lifting a hand to clear them away, and the Red Swastika Society

associated with us has been forbidden to do so.

It may be that the disarmed Chinese will be forced to do the job before … they're killed. We Europeans are all paralyzed with horror. There are executions everywhere, some are being carried out with machine guns outside the barracks of the War Ministry.

…As I write this, the fists of Japanese soldiers are hammering at the back gate to the garden. Since my boys don't open up, heads appear along the top of the wall. When I suddenly show up with my flashlight, they beat a hasty retreat. We open the main gate and walk after them a little distance until they vanish in the dark narrow streets, where assorted bodies have been lying in the gutter for three days now. Makes you shudder in revulsion.

All the women and children, their eyes big with terror, are sitting on the grass in the garden, pressed closely together, in part to keep warm, in part to give each other courage. Their one hope is that I, the 'foreign devil' will drive these evil spirits away. 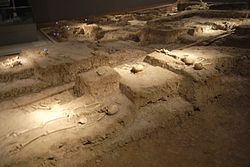 Skeletons of the massacre's victims

As with a majority of mass injustices, there are those who deny the Rape of Nanjing even occurred. Many officials and historians claim that, while deaths and rapes did occur, they were on a far smaller scale than reported.[1] The heightened problem in this particular case is that denial of this horror is part of mainstream Japanese politics, and is indeed tacitly subscribed to by the vast majority of Japanese. In fact, former Japanese Prime Minister Shinzō Abe (a grandson of former-Prime Minister and unprosecuted Class A war criminal Nobusuke Kishi

, a man so brutal his own contemporaries nicknamed him "The Devil of Showa") has been a long-time denier. However, the figure of 300,000, first popularised by Australian journalist Harold John Timperley in his 1938 book What War Means: The Japanese Terror in China, is likely an overestimate. Lewis S. C. Smythe, who was a missionary and professor at Nanking University and also witness the massacre first hand, carried out an investigation as part of his job as Secretary of the International Committee for the Nanking Safety Zone (December 14, 1937 -- February 10, 1938) and came up with the figure of 12,000 within the Nanking SAD and an additional 26,870 in surrounding villages. Smythe's figures are widely considered a likely underestimate today. There are also fundamental difference as to both spatial and temporal boundaries, and whether the estimated 100,000 POWs executed should be counted, in the legitimate academic discourse of methods of estimation. Today's academic consensus is that between 40,000 and 200,000 civilians died within Nanking SAD in the first 6 weeks of occupation, and one could therefore view attempts to put the figure much below 40,000 as "denials".

Former Justice Minister Shigeto Nagano and Tokyo Governor Shintaro Ishihara have called the massacre a Chinese fabrication.[1] Though the former apologized for this remark shortly thereafter,[7] known nationalist crank Ishihara has yet to do so,[8] and in fact has publicly promoted a denialist documentary.[9]

During the Second World War, it appears that Nazi Germany's position was a denial of any wrongdoing, for what should hopefully be obvious reasons. The aforementioned John Rabe was, upon his return to Germany, detained by the Gestapo and ordered not to write or lecture about the events at Nanking.[10]

As George Orwell put it in Looking Back on the Spanish War: "The raping and butchering in Chinese cities, the tortures in the cellars of the Gestapo, the elderly Jewish professors flung into cesspools, the machine-gunning of refugees along the Spanish roads – they all happened, and they did not happen any the less because the Daily Telegraph has suddenly found out about them when it is five years too late."

Since the 1990s, with growing nationalism in both countries, the Chinese government has been just as determined to keep the Nanjing Massacre in the world's memory as the Japanese right are to deny it. Currently, the Chinese Communist Party views the memory of the war and the atrocities as an essential tool to keep the loyalty of the people, almost constantly airing television specials on the subject as well as exhaustively teaching about it in their schools.[47] The legacy of the war seems to be an increasingly important element of Chinese nationalism, particularly when aimed at their regional adversaries. Even more than 80 years later (Xi visited a memorial to commemorate the anniversary), the memory of the Massacre is a major sticking point between China and Japan, this despite warming relations.[48] The official stance of the Chinese government is that Japan has not done enough to apologize. In Taiwan, the pan-Blue stance is similar to that of the PRC (e.g., in Decemeber 2014 then-president Ma of KMT attempted to play the nationalistic card after suffering heavy defeat in local elections in the aftermath of the Sunflower movement[49]), but the current ruling pan-Green stance is to completely sidestep the issue altogether (e.g. current president Tsai's opinion piece in 2009[50] as leader of opposition party) in favour of a closer alliance with Japan.[51]