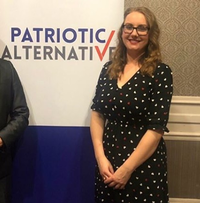 Towler has appeared on This Week on the Alt Right with Collett.[4]

According to a report by Hope not Hate, Towler is "A former army cadet and politics graduate, since 2017 she was an editor of the white nationalist/alt-right news website, Defend Evropa, where she claims she began her activism, though her attention has increasingly been on PA activities."[5]

On 18th April 2020, Towler attended the Awakening conference in Finland with Tomislav Sunić

, Edward Dutton and other far-right individuals.[7]

Towler pre-2017 was part of the counter-jihad movement; she radicalised further to become a white nationalist. She opposes feminism and says her idol is the fascist Oswald Mosley.[8]

Should we believe that The Great Replacement is a natural occurrence, or is it possible that it was planned all along?

Whether you believe the first option or the second, Kalergi’s plans certainly seem to be fully realised across Europe today. Every year, miscegenation produces thousands of mixed race citizens (or “sons of Kalergi”) across our continent. Meanwhile, our politicians, media and educators sell us false information about humanitarian issues and tolerance and diversity. Our proud, White history is rewritten in front of our eyes with the aim of making us believe that Europe was always a home to millions of migrants from the Third World, when in fact, this couldn’t be further from the truth. We’re taught that it is wrong to love and support your own race and to be proud of your identity (but only if you’re White!) and any attempts by us to speak out about unvetted immigration or culture clashes is silenced by new hate speech laws which struggle to even define what hate speech actually is.[9]

Towler opposes interracial marriage, writing: "one thing that we must do if we want to reverse this is to marry within our own race and produce white children" and "If we are to shift public opinion on racial dating preferences then this must start with us being brave enough to admit that we only want to date our own."[10]

Non-surprisingly, for a hardcore racist, Towler is a proponent of Richard Lynn's dubious ideas about race and intelligence. She argues non-white immigrants to UK have reduced the overall IQ of the country: "We can easily begin to see here how having a lower percentage of high-IQ native Europeans and having a higher percentage of lower-IQ non-native people in Europe has had a negative effect on our countries’ average IQ scores."[11]

Towler appeared on a video chat with Mark Collett, her husband Sam Meliá, and two other Patriotic Alternative supporters to discuss the 2021 London Mayoral election and its candidates. Towler, Meliá and Collett in the chat espouse global warming denial views and criticise the Green Party and Animal Welfare Party for wanting to take radical actions to mitigate climate change.[13] Meliá and Collett also criticise the Animal Welfare Party for its promotion of plant-based diets. Of all the mayoral election candidates, Towler says she would support Laurence Fox.

Towler was an article writer for the website Defend Evropa from April 2017 to March 2020.[14] Media Bias/Fact Check has ranked factual reporting on the website low, describing it as a strongly-biased website "that has poor sourcing, hate language and affiliation with known white nationalists".[15]

Several of Towler's articles argue that white people need to increase their fertility rate, and she supports the pro-natalism policies of Viktor Orbán who promised that Hungarian women who have four or more children will never pay income tax again.[16][17][18] According to Towler: "This is a great sign for other nations who may choose to prioritise incentivising native families to have more children, rather than relying on mass immigration and the inevitable demographic replacement that follows."[19] In July 2018, Towler wrote another article for Defend Evropa titled "Success! Hungary Begin to Increase White Births Without the Aid of Immigration".[20] Despite her obsession with getting white people to breed more, Towler (born 1987) herself is childless resulting in white nationalists from her own community to criticise her.[21]

Towler in June 2020 made the following tweet that has been quoted by Daily Mail[23], Yorkshire Post[24] and The Guardian[25]:

Towler responded by posting a link to Sean Last's blog.[28] Last is a white nationalist who formerly wrote articles for a neo-Nazi Holocaust denial blog The Right Stuff.

Towler and her husband Sam Melia, a regional organiser for Patriotic Alternative, were arrested in April 2021 for racial hate speech and public order offences. Their electronic devices were seized by the police but they were released without charge. Melia is a former member of the neo-Nazi terrorist group National Action.[29]

On April 30, 2021, Towler wrote an article "Things I Wish I Did Before Being Raided by the Police," claiming that "It is blatant political intimidation by the police. Criticise the government’s immigration policy as we will brand you as a terrorist."[30]