The origins and spread of agriculture.

The Neolithic Revolution or First Agricultural Revolution, possibly the most significant change to befall the modern human race, involved the abandonment of hunter-gatherer and other nomadic/semi-nomadic lifestyles in favor of settled agriculture. It began independently in several places:

The introduction of agriculture brought the benefit of a food supply much less prone to uncertainty, encouraging the dominance of settled populations (although these do predate agriculture by several

centuries to a millennium in the Middle East.

The world's major cereal, legume, and other staple crops arose with the beginnings of agriculture, and humans began the first steps of genetically modifying these crops to make them more suitable for agriculture. Wheat, barley, rye, and fava beans originated in the Middle East or the Mediterranean area. Rice, soybeans, sugar cane, cabbage, and carrots were first cultivated in East Asia. In the Americas, maize corn, potatoes, squash, sunflowers, and snap beans were cultivated. Domestic food animals appear at this time as well: goats and cattle from Eurasia, chickens in South Asia, the llama and turkeys in the Americas. Humans first domesticated the horse at the dawn of the Bronze Age in an area that is now part of Russia, Ukraine, and Kazakhstan.[1]

But, according to some, significant negatives came with the Neolithic revolution: anthropologist Jared Diamond has called the adoption of agriculture "the worst mistake in the history of the human race".[2] 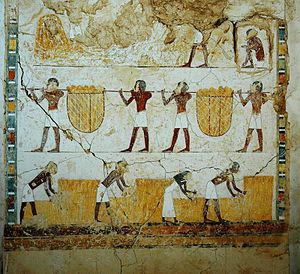 The idea of property in land is one product of the Neolithic Revolution. While prior societies sought to control resource-rich areas and exclude other human groups, the idea of demarcated and fenced boundary lines began when groups of human farmers began cultivating specific tracts of land. Agricultural land is not fungible. Some will be more productive than others. Some people will be able to cultivate more efficiently than others. The point, moreover, of practicing agriculture was to create a surplus of stored food, and some producers will inevitably be able to store more than others.

These differences, moreover, tended to snowball over time, and were exacerbated by the rise of new social classes and leadership styles.[5][6] "Thus with the advent of agriculture an elite became better off, but most people became worse off. Instead of swallowing the progressivist party line that we chose agriculture because it was good for us, we must ask how we got trapped by it despite its pitfalls." [2]

The need to collect, store, and preserve the agricultural products on which these societies depended made it necessary to guard these stores against both local theft and raids from outsiders: This led to a need for a more organized form of military than was necessary in wandering bands. The military class, as guards and masters of the communal storehouse, found that they could exempt themselves from agricultural toil and live off exactions from the stores.[2]

These military outfits were enabled to assume leadership roles in the societies, and gave rise to the first monarchies and aristocracies.[7] "With the beginning of 'civilizations', or markedly stratified societies maintained by force, the bulk of the population could no longer exert economic demand and were fed only at the whim of the rich."[8]

The same rise in social stratification and hierarchy also enabled the emergence of formal religion, including a class of priests and permanent temples and shrines. Priests, usually amongst the educated in some form, were useful in predicting crop cycles and development of calendrical systems. Religious establishments and the need to preserve rituals and doctrines gave an impetus to the development of writing.

The character of the deities themselves changed with the Neolithic Revolution. "High" gods came into prominence, the kind that establish societies and hand down codes of laws to the priests. Funerary cults and the use of grave goods become much more common, suggesting that religious ideas revolving around the continuation of mortal life in an afterlife become much more salient during this period. "[O]rganised religion did start to appear around the time of the Neolithic Revolution. This period marks the first examples of temples, priests, religious institutions, holy wars and an increased prevalence of 'high' moral-giving gods."[9]

Humans, like other semi-social primates, exhibit inherited gender roles, in which female roles are central and necessary for the survival of social units, while males tend to be peripheral, competing for status and the attention of females.[10] The larger scale of human societies made possible by the Neolithic Revolution, the growth of social stratification and hierarchical structures, the need for defending the towns, and the emergence of a class whose profession is communal violence, all favored male roles at the expense of female roles.[11] In foraging societies, the gathering and selection of plant foodstuffs was primarily the work of women.[12] Agriculture turned cultivation into heavy labor that was the work of organized teams, and allowed men to impose themselves on the women's domain further.

The sedentary nature of agricultural lifestyles increased the number of children women were expected to bear. In nomadic societies, pregnancies must be separated by at least four to five years, due to the need of the children to be able to keep pace with the band. Sedentary farming societies are not subject to this constraint. Women were therefore expected to bear children more frequently, which took a toll on both their health and their independence.[2] This drastic shift in the power relations of the genders gave rise to what some now call the "patriarchy".[2][13] "This puts the origin of patriarchy in the 8000-3000 BCE period, when early agriculture yielded a surplus and the beginnings of militarisation helped males to seize control of the surplus and the main producers of labour power, women."[14]

The movement from quickly-consumed wild foods to stored agricultural crops of mostly pulses, grains, and beans made substantial changes in the human diet. Archeologists can use a simple metric to determine whether ancient human remains come from an agricultural society. If they do, their teeth will likely be bad. This is a consequence of the consumption of stored foodstuffs and an increase in the amount of carbohydrates consumed. Dietary and vitamin deficiency diseases such as beriberi

also appear in agricultural populations, the result of the monotonous diets eaten by the poor in those societies.[15]

Humans who practiced agriculture were physically less developed than nomads and hunter-gatherers. Their average height dwindled from 5'10" (178 cm) for men and 5'6" (168 cm) for women to 5'5" (165 cm) and 5'1" (155 cm), respectively, and it took until the twentieth century for average human height to come back to the pre-Neolithic Revolution levels.[16]

Denser human populations also encouraged the spread of contagious diseases. Agricultural populations that were not wiped out by disease organisms co-evolved with the germs themselves to survive them.[17]

While the spread of hunter-gatherer humans across the planet (ca. 12,000-40,000 BCE) did have ecological consequences by helping cause the extinction of large animals across the globe, the spread of agriculture had a much more significant consequence. Agriculture requires clearing large areas of fertile land, and removing or drastically changing natural habitats. While nomadic peoples exploited large territories, they did so in a periodic and temporary manner, allowing the land periods of rest. Sedentary agriculturalists exploited smaller tracts of land with much greater intensity, modifying landscapes via irrigation and clearing other plants for their cultivated crops. It was literally millennia before the sustainability issues of soil erosion and soil exhaustion caused by crop monocultures were recognized by some agricultural societies.[18]

So given all the above, why did humans take to agriculture so wholeheartedly? Why did agricultural civilisations win out?

Despite the health consequences of consuming a diet consisting primarily of just a few domesticated foodstuffs, agriculture had the significant advantage of providing a more consistent, greater (viz. e. g. domestic vs. wild strawberries and wild teosintes vs. maize [i. e. Zea mays mays]), food supply than the greatest that could be available from hunting and foraging. Not only did it reduce the risk of starvation due to inadequate presence of native plants and animals in a given location, agriculture minimized the need for risky migrations and allowed people to devote more time to activities other than gathering food- which gave rise to division of labor and hierarchies as a side effect.

One hypothesis, recently revived by Jared Diamond, but which in fact was first suggested in the 13th century CE by the Muqadimmah

, suggests that people desired the broader and more complicated material culture – luxury goods like textiles, pottery, and furniture – made possible by sedentary living. These things could only be sustained by the rise of specialized craftspeople and a division of labor. The same surplus of stored foodstuffs that enabled the soldier, the aristocrat, and the priest to exist also made it possible for potters, weavers, smiths, and eventually scribes to make a living.[17]

Another proposal suggests that the early agriculturalists found themselves in a Malthusian trap: the food supplies made possible by agriculture led to a population explosion with a ratchet effect that made a return to foraging lifestyles impossible. The larger populations made sustainable by agriculture also gave the farmers the advantage of numbers in any conflict over resources with the foragers, and enabled the farmers to force the foragers out of desirable environments.[19][20][21]

The Neolithic Revolution helped contribute to faster population growth. Part of this came from the increased ability to take care of children, who became a proportionately larger part of society.[22] The sedentary lifestyle that came with agriculture has been a major factor that allowed human civilization to grow towards its current size and scope. However, this growth did spiral out of control during the Industrial Revolution, and the rise of evidence based medicine.

Another hypothesis holds that agriculture first took root in a number of uniquely favored environments where not much engineering was involved to turn the area into a bread-basket. Humans in these areas began modifying the plants and tameable animals they found there to be more suitable for cultivation. Their rising populations then expanded these practices into less optimal territory. These farmers attempted – with some success – to reshape the environment in an attempt to reproduce the fertile environments where the practices originally took hold. As such, farming spread from a few early population centers into more marginally suitable land.[20][23]

Under hunting and gathering, most people lived in bands about 75-150 people strong that operated many miles away from other bands, all of whom were mobile and difficult to communicate with.

After the Neolithic Revolution, people settled down and formed cities and trade, both of which facilitated cultural exchange between disparate peoples,[24] although this didn't guarantee they'd get along any better.