From RationalWiki
(Redirected from Churchill)
Jump to navigation Jump to search

You were expecting something completely different?

Winston Churchill (1874-1965) was a British aristocrat and politician who served as First Lord of the Admiralty from 1911-1917 and Prime Minister in 1940-45 and 1951-55. Today he is remembered for his performance in the role of "courageous leader of beleaguered Britain" during World War II. That, most would argue, deserves praise.

Churchill remains a controversial figure because of incompetent or brutal decisions made during the two world wars. He played a central role in planning the disastrous military campaign at Gallipoli

during WWI, leading to a quarter-million Allied casualties. Worse, his decisions during the Second World War led to the fire-bombing of German cities by the Royal Air Force (the bombing of Dresden is one of the rare examples in which the US Army Air Corps joined the RAF in the purposeful incineration of an entire city.) To be fair, however, Churchill later realized how horrific it was and expressed deep regret over this strategy, likening it to "mutual annihilation," and lamenting a lost age of chivalry in warfare.

Churchill's attitude towards Indian affairs arises over what some historians claim about the Bengal famine of 1943, which has sought to place significant blame on Churchill's wartime government for the starvation and deaths up to four million people. In response to an urgent request by the Secretary of State for India, Leo Amery, and Viceroy of India, Wavell, demanded to release food stocks for India, Churchill responded with a telegram to Wavell asking, if food was so scarce, "why Gandhi hadn't died yet?"[citation needed] He is remembered in India not only for that little famine in Bengal, but also for calling Mahatma Gandhi a "half naked seditious fakir."

And then there was the matter of the Tonypandy riots in South Wales. The Welsh working class has never forgiven Churchill for sending troops to remove pickets by force from the coal mines.

Churchill was a racist and bought into eugenics, advocating confinement and sterilization of the "feeble-minded".[1]

In 1937, Churchill told the Peel Commission

Churchill conspired with Eisenhower and the CIA to depose Mohammad Mossadegh,

the democratically elected (if by then increasingly authoritarian) Prime Minister of Iran, and install in his place the Shah. This led to the anti-Western blowback that created the Islamic Republic of Iran. 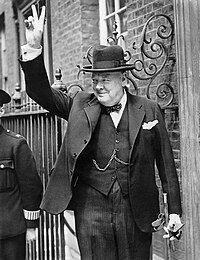 (Victory Sign) as a symbol of British defiance towards the Axis powers during World War Two. Unfortunately, he at first used it the wrong way round.[3] As, later, did Margaret Thatcher.[4]

Winston Churchill's image is regularly deployed by wingnut funsters such as UKIP,[5] the British National Party[6] and not unoccasionally by U.S. Republicans. They generally try to associate Churchill with some sort of anti-immigrant, anti-Europe agenda.[7] This is just a little bit odd as:

It has been widely suggested that Churchill suffered from bipolar disorder[15] or ADHD,[16] and thus it is not surprising that he was given to hellish bouts of depression. He referred to it as "the Black Dog" and was able to fend it off by painting, drinking copious quantities of alcohol (approved by his doctor), and consuming voracious quantities of his favourite Stilton cheese, rich desserts and imported cigars which he developed a taste for as a teenager. He suffered ten strokes but still lived to be 90.

Churchill is alleged to have slept only four hours, drunk an entire bottle of port before retiring and three scotch and sodas before lunch alone. Upon the subject of his alcoholism, Churchill remarked with characteristic dryness "I have taken more out of alcohol than alcohol has taken out of me."[17] 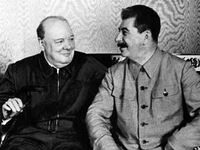 A politician noted for his racism, military blunders and mass starvation, pictured with Joseph Stalin.