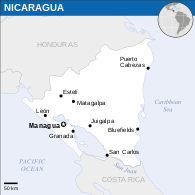 Nicaragua is a republic in Central America. It is the largest nation on the isthmus, but also the least densely populated, thus being similar in size to its smaller neighbors. The country is bordered to the north by Honduras and to the south by Costa Rica. Its western coast is on the Pacific Ocean, while the east of the country borders the Caribbean Sea. Nicaragua is one of the very few countries left in the world where abortion is illegal with no exceptions. The country has been notable in recent years for its political instability and for being one of the few countries to take on the United States in the International Court of Justice and win (not that the United States feels any obligation to abide by the ICJ's decision).

An important step you can take to establish your politically correct bona fides is to always pronounce it "Nee-ka-RA-wah" (with the R, of course, being a tongue-tap on the hard palette, not the "pulled" R as in English).

By the 1970s, support for the Somoza family's dictatorship was dwindling. The Sandinista National Liberation Front (FSLN, from its Spanish name Frente Sandinista de Liberación Nacional), a socialist political party which had its origins in opposing the United States' occupation of Nicaragua in the 1930s, grew in support and influence throughout the decade until a popular uprising brought it to power in 1979, followed by an electoral victory in a democratic election with overwhelming popular support.[note 1]

Shortly after the FSLN came to power, a group of right-wing paramilitaries known as the Contras began attacking the new Nicaraguan government. This instigated a disastrous civil war which killed tens of thousands of civilians, destroyed virtually all of the country's already fragile infrastructure, and left 20% of the population homeless.[1]

The United States government played a major role in supporting the Contras against the Nicaraguan government. It also controversially armed the Contra guerrillas using money earned from weapons sold to Iran, which, as a supporter of the terrorist group Hezbollah, was strongly opposed in public by the Reagan government.[2] This is known as the Iran-Contra scandal.

After the civil war[edit]

Popular support for the Sandinista government declined dramatically as a result of the government's program of mandatory military service to prepare for what it viewed as an imminent U.S. invasion. At the nadir of that support, the Sandinistas lost power to the National Opposition Union (español: Unión Nacional Opositora, or UNO) in the democratic election of 1990. They returned to power after having won the 2006 elections. Having become staunchly corrupt[citation needed] and conservative, the party threw its support behind the law against abortion in all circumstances. Pro-choice activists and medics who aided a nine-year-old Nicaraguan girl who was impregnated by her stepfather in having an abortion when it was still legal are currently being persecuted by the government.[citation needed] President Daniel Ortega, himself being accused of having sexually abused his stepdaughter (the only reason he can't be prosecuted being his judicial immunity)[citation needed], has described human rights activists and feminists as "fascists".[citation needed] Ortega called the economic crisis a "punishment from God".[citation needed]

Another "interesting" political figure in Nicaraguan recent history is former Managua mayor and President Arnoldo Aleman, who entered politics as a used car salesman with some US$10,000 to his name and after one term (1990-1995) as mayor of the capital and one term (1997-2002) as president exited the presidential mansion with some US$100,000,000 in his possession and corruption charges being brought forth against him (go figure). His immediate successor and former vice president tried to push the prosecution forward, which ended up splitting his liberal[note 2] bloc and undermining the President. Ortega seized the opportunity and agreed to change the 20-year jail term into house arrest[note 3] in exchange for some political horse-trading. This deal, simply known as "el pacto", may very well have paved the way for the Sandinista electoral triumph of 2006, where the Liberals split the vote, whereas a Sandinista challenger to Ortega died days before the election.

In 2011 Ortega was reelected with an unprecedented 63% of the vote; the opposition candidates being the highly corrupt ex-president Arnoldo Aleman[3] and the eighty-something Fabio Gadea Mantilla, plus purported voter fraud, making it easier for him to win the election. While the general economic outlook is better than it has been since the Contra war, corruption and cronyism plague the Ortega administration and he in turn picks a fight (usually with Costa Rica, the US or "the West" in general) whenever his political fortunes seem to be sinking. That being said, Ortega has still a strain of economic populism left in him as evidenced by a gift of new satellite dishes during the 2006 campaign season, highly subsidized public transport (which in Nicaragua means buses and taxis) or "plan techo" whereby poor families can apply for a government-paid roof for their house.

In 2018 Nicaragua was beset by a series of demonstrations

, and is now in its most serious political crisis since the 1980s. It all began in April 2018 when the country was hit by a series of wildfires and the government's lackluster response to them. Then Ortega decided to grab onto the third rail of politics and announced that there was going to be a tax hike and cuts to benefits to make up for shortfalls in the system. The result was a bloody and violent crackdown against demonstrators; who then quickly escalated their goal to demand Ortega's resignation and early elections. International human rights monitors have found widespread abuses perpetrated by security forces and paramilitaries.[4][5]

Nicaragua is notable for its role in the 1986 International Court of Justice case Nicaragua v. United States.[6] In this case, Nicaragua charged the United States with interfering in a domestic conflict between the Nicaraguan FSLN government and armed far-right paramilitary insurgents. The case is a watershed in international humanitarian law (IHL), the branch of international law covering armed conflicts.

Because the United States was never directly involved in fighting the Nicaraguan armed forces with its own armed forces, the conflict was classified as a domestic conflict "with international characteristics" rather than an international conflict (one fought between two separate sovereign states by their military forces engaging directly with each other). However, the United States was found guilty of meddling in this domestic conflict indirectly by funding, arming, and training the Contras. The ICJ ultimately decided that Nicaragua was indeed entitled to compensation because, even though Nicaragua's military actions were only really against the Contras, the Contras themselves could not have sustained their guerrilla warfare without U.S. backing and financing (paragraphs 95-100 of the ICJ decision).

The United States claimed that it was only supporting the right-wing Contra paramilitaries against their left-wing Nicaraguan government because Nicaragua was supposedly backing a left-wing guerrilla insurgency against the right-wing government of neighboring El Salvador, and the U.S. was just trying to protect El Salvador from Nicaraguan meddling. The ICJ decided that this excuse does not hold up because El Salvador never directly asked the U.S. for help (paragraph 51), and even if it had, the U.S. would have to help El Salvador fight their guerrilla insurgents in El Salvador, not by fighting the supposed backers of these guerrillas in another country like Nicaragua.

To this day, Nicaragua has not received compensation from the U.S.