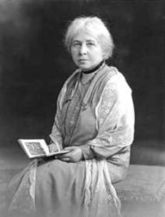 Margaret Murray was a British Egyptologist, anthropologist, folklorist, and conspiracy theorist. She is remembered today mostly for her "witch cult" hypothesis about witchcraft, which was essentially a conspiracy theory which held that many of the people condemned for witchcraft in early modern Europe were in fact the members of a surviving, organized, and clandestine pagan religion. Widely accepted and popularized during the first two thirds of the twentieth century, Murray's hypothesis of pagan survivals is pretty much exploded today. Her influence remains strong in Wicca and other strands of neopaganism, as well as in fantasy fiction.

The Witch Cult in Western Europe[edit]

In 1921, Murray published The Witch Cult in Western Europe. Historian Ronald Hutton has said that this book "rested upon a small amount of archival research, with extensive use of printed trial records in 19th century editions, plus early modern pamphlets and works of demonology", and that "the book was generally dry and clinical, and every assertion was meticulously footnoted to a source, with lavish quotation".

However, the book pieces together written accounts from a wide variety of sources, mostly Scotland, France, and Germany, and from these sources cobbled together an account that suggested that all of these witches shared a common faith and liturgy. Since many of the confessions were extracted by torture and contained elaborate tales of personal involvement in supernatural wonders, she suppressed the more fantastic narratives in her sources in order to present witchcraft as a persecuted pagan religion.[2] She introduced the words "esbat" and "sabbat" to the English language, and also "coven", an archaic Scotticism for "convent" or "gathering", as the name for a congregation of this faith.[3]

This modern drawing of an enigmatic cave painting

was used by Murray to establish the worship of her Horned God in the Paleolithic. It turns out that the horns may not even be present on the original.

The somewhat plausible (if shaky) hypothesis about persecuted pagan survivals grew into pure woo and conspiracy theory in Murray's later books on witchcraft. The God of the Witches, 1931, expanded on her claims and introduced the world to the "Horned God", the alleged deity of the witch covens (the Goddess comes in from elsewhere). Identified by the churches with Satan, he was actually a version of the gods Pan or Cernunnos. Reports where the witches met with a horned figure actually described rituals conducted by the witch clergy in the guise of this Horned God. This was imagined to continue a practice that dates to the Paleolithic era. If true, this would make the pagan witch cult a promising candidate for the world's oldest conspiracy.

The conspiracy theory gets even better. The Divine King in England (1954) portrays the line of the Plantagenet kings of England as pagan participants in this witch cult, despite their outward allegiance to Christianity. The Order of the Garter

got its start as the royal coven; the garter of the founding legend supposedly being a symbol of allegiance to the witch cult. Being a fertility cult organized along the lines suggested by Sir James Frazer's The Golden Bough, it periodically required human sacrifice. Monarchs who died violently, like William Rufus

, died as sacrifices to or especially as the witch-god. Others could be sacrificed in their stead; according to Murray, Saint Thomas Becket

, archbishop of Canterbury, was one such sacrifice, as was Saint Joan of Arc

As you can see, Murray's tales grew in the telling.

While these later embellishments of the theory met with little acceptance, Murray's basic witch cult hypothesis of pagan survival was accepted for many years. In 1929, Murray wrote an article for the Encyclopedia Britannica about witchcraft, which stated her pagan survival theory as fact; that article remained essentially unchanged until 1968. Current scholarship, however, rejects this hypothesis. Murray's work was one influence that led to the re-interpretation of many themes from British folklore, from maypoles

, as "pagan survivals". And many writers doing basic research on witches as characters turned to the Britannica, where they learned of her conspiracy theory with its obvious story hooks.

The sweep of her theories was a part of their popular appeal; she managed to link paleolithic art, the Plantagenet monarchs, Robin Hood, the Dorset Ooser

, fairy tales, King Arthur and Merlin, Norse seers and Celtic saints into a hodgepodge that turns out to be an exciting shared fantasy. It had the appeal of the more fanciful conspiracy theories; people, receiving news that a scholar has tied together all of these disparate elements into a shared body of wonderlore, assume that the weaving of so remarkable a web of associations must mean that the writer is on to something. The compelling nature of this fantasy made her infallible in the public's eye even as the few sober scholars that took notice of her work were exasperated by it.[2]

Her witch-cult hypothesis also makes Murray the godmother of Wicca; she wrote a preface to Gerald Gardner's Witchcraft Today, in which Gardner proposed to reveal to the world the abiding existence of the Murray witch cult, which Gardner had in fact invented himself by ransacking literary sources, including Murray herself, of course. Most of the elements of the 1950s invention or 'revival' of Wicca were set forth in her theories. Covens with thirteen members, the witches' "sabbaths" (actually an early modern slur against Jews), and the idea of a clandestine pagan religion practiced underground with the protection of the Plantagenet royalty all were original to her. And all of these ideas were set out in her 1929 Britannica article, and thanks to that were circulated widely, made easily accessible, and became many people's first stop in researching witchcraft.[4]

The witch-cult hypothesis also became a stock trope in fantasy fiction. Murray's witch-cult figures directly in novels such as Philip Lindsay's The Devil and King John (1943), Evelyn Eaton's The King Is a Witch (1965), and Katherine Kurtz's Lammas Night (1983); and less directly in the fantasy trope of secret cabals of underground religions, older than and persecuted by a new faith.