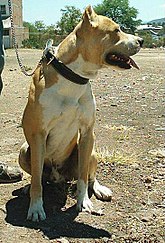 A pit bull
No, this is not that personification of everything that is wrong with rap music today.

Pit bulls are an informal breed of dog derived from bull-baiting dogs and terriers.[note 1] They were bred largely for fighting purposes and can thus have an aggressive attitude towards other dogs. This animal-aggression is characteristic, to varying degrees, of terriers in general.

Pit bulls have become a focus of media and legislative attention, with some groups alleging that they should be considered dangerous weapons, and banned (as in the U.S. city of Denver,[2]) and some defending them by claiming that individual pit bulls are just as variable as any other breed.

The issue of pit bulls and their purported danger to society has been hotly debated in recent years. There are two opposing sides: One says that pit bulls are no more dangerous than any other breed of dog, as their behavior is influenced more by their training than heredity and that they should not be discriminated against or treated differently, while the other side maintains that pit bulls pose a real danger to society due to their aggressive nature, propensity to unprovoked attacks, and great physical strength. There is no truth to the claim Pit Bulls have a locking jaw.[3] Even pro-Pit Bull sites acknowledge that the dogs have strong jaws, although this is equally true of other large, powerful dogs: Rottweilers, police dogs (German shepherds and variants), mastiffs, and Dobermans Pinschers are also noted for this.

The relatively low incidence of serious attacks by dogs and the informal nature of the definition of "pit bull" makes it difficult to accurately assess any claims about the dangers pit bulls might present. While it does seem to be true that pit bulls are over-represented among attacks that led to serious injuries and fatalities,[4] the very low numbers make it difficult to come to any conclusions. This is especially true when one considers that any dog owner who intends to train a dog to fight, thereby making it much more dangerous to others, is very likely to pick a pit bull. In this way, the proverbial danger of a pit bull verges into a self-fulfilling prophecy. In fact, pit bulls were initially bred not to be aggressive towards humans, as this would have made them a danger to their handlers. Insofar as they do express aggression towards people, as opposed to dogs, this is a sign of deviation from the original characteristics.

One of the most problematic aspects of the debate over pit bulls is the question of identifying them. It is generally agreed that "pit bull" refers to one of a variety of breeds of bull terrier, most commonly the Staffordshire bull terrier and the American bull terrier.[5] But as with all breeds, only a relatively small fraction of dogs are purebred, i.e. 100% "pit bull." Instead, many are mixed breeds. This makes it difficult to even decide on what a pit bull is, even before the difficult question of their possible management.

It is an indisputable fact that both breeds of dog were bred for fighting. They are "pound for pound, one of the most powerful breeds of dog ever developed," and have a "very high pain threshold."[6] But the breeds' suitability for fighting does not mean that each animal is inherently a fighting dog, and opinion is mixed on what degree of danger is inherent in having some quantity of pit bull blood.

However, many states have enacted "breed-specific" laws that contain language that defines what they consider legally to be a pit bull. Michigan describes a pit bull as:[8]

Cabot, Arkansas uses the above language, but widens the description to add:[9]

Pit bulls in the United States[edit]

The name "pit bull" comes from their original intended purpose: two dog owners would dig a pit in the ground, then throw in their dogs to fight to the death. The pit would ensure that the dogs could not leave, and would have to continue to fight until one fatally wounded the other.[citation needed]

Dog fighting in the United States[edit]

Dog fighting initially had little to no restrictive laws, but as the conditions of dog fighting became more widely known, and people realized that the violence of the "sport" and the pain and destruction caused to the dogs,[10] and peripheral animals such as cats,[11] sometimes used as "bait" or "training" animals,[12] there arose a sentiment that causing dogs to fight was cruel. Animal protection laws began to be proposed and passed and included other animals that were made to fight, such as birds (usually known as "cock fighting"). As of 2008, it became a felony in all 50 States to stage a dog fight.[13] In some states it is also against the law to attend a dog fight or own a dog for the purpose of fighting.[14]

Advocates of dog fighting compared it to fighting sports such as boxing. Those opposed to dog fighting maintained it was not the same, as human beings are free to choose to fight or not, while the dogs did not have a choice, and were forced to fight. A boxer can also choose to give up, and the fight ends if a boxer is knocked out, while pit bulls were forced to fight to the death. The best analogy would be "Mandingo Fighting" from Django Unchained,

where two slaves would be forced to fight each other to the death for the entertainment of others.

Results of studies on pit bull attacks are mixed. While some studies found substantial additional danger and frequency in pit bull bites, other studies note difficulties in accurately determining breed and cite the possibility of breed ownership to owners behavior — pit bull owners may just be more likely to poorly train any dog they might own.

A US Department of Health and Human services report on breeds of dog involved in fatal human attacks, noted that while the fatal attacks appeared to be a breed-specific problem located to pit bulls and Rottweilers, other breeds bite and caused fatalities at higher rates. They also noted that difficulties in determining breed with certainty made breed-specific ordinances practically difficult to enforce, and further note that practical alternatives to breed-specific ordinances, exist, such as generic dangerous dog regulation and animal control laws. They finally noted that only a small proportion of dog bites were fatal, and fatalities should not be the driving factor concerning public policy on dangerous dogs.[15]

An April 2011 Canadian dog bite study was conducted by physicians and consisted of a review of 82 cases at a level 1 trauma center. Where the breed of dog was identified, the researchers concluded that attacks by pit bulls are associated with higher morbidity rates, higher hospital charges, and a higher risk of death than are attacks by other breeds of dogs.[16]

The American Veterinary Medicine Association has found that "controlled studies have not identified this breed group as disproportionately dangerous."[17]

More importantly, Merritt Clifton, who is the primary source for proponents of breed-specific laws (BSL), has been debunked as a charlatan,[19][20] while an analysis of attacks in cities that passed BSL showed that overall attacks increased after BSL was passed.[21]

Since then, many states have termed pit bulls a dangerous breed of dog and have enacted laws pertaining to how they are housed and the extent and manner in which they can interact with the public.

These laws commonly require such measures as:

The laws mandate penalties for violations, usually monetary fees or fines, but in some cases include jail time.

Some examples of state legislation:

It should be noted that all of the above fails to take into account the wild variations within how each area defines "pit bull" and the Journal of Applied Animal Welfare Science found that "87.5% of the dogs identified by an adoption agency as having specific breeds in their ancestry did not have all of those breeds detected by DNA analysis."[36]

There have been cases where dog owners questioned or challenged the right of the government to make laws regarding pit bulls. States maintain that it is their right, both legally and in the interest of public safety.

This language is similar in many of the laws that have been enacted against pit bulls.

In 1990, Winnipeg was the first major Canadian jurisdiction among several to ban pit bull-type dogs. In 2005 Ontario adopted a province-wide ban on pit bulls. Edmonton requires that vicious dogs be muzzled in public and that the American Staffordshire terrier and Staffordshire bull terrier (breeds often included under pit bull-types) be automatically considered vicious.

The Rest of the World[edit]

Pit bulls are banned under the Dangerous Dogs Act.[40] This prohibits four breeds including pit bull, although you can get your dog exempted if it is neutered, microchipped, insured, muzzled in public, and subject to other conditions. The legislation has been opposed by British animal welfare charity the Royal Society for the Prevention of Cruelty to Animals and by the British Veterinary Association, although PETA, being always awkward, have called for more breeds of dog to be restricted.[41][42][43]

Australia has a number of state-specific laws.[44]

According to the American Temperament Test Society, a group that performs testing that documents their methods[45], the American Pit Bull Terrier and the American Staffordshire Terrier have passing rates over 80% for agreeable temperament.[46] The average passing rate for the other 121 breeds of dogs in the tests: 77%. It must be noted, however, that the American Temperament Test (ATT) is not meant to assess domestic pet suitability; the methodology of its testing largely rewards dog breeds which can remain calm in novel situations[47][48] as the ATT was originally created to test working dogs for police and military roles.[49] Pit bull types and mixes have a genetic predisposition for such boldness, as is demonstrated during maulings when these dogs do not recognize fear and ignore signs of submission from their victim. Indeed, even the president of ATTS, Carl Herkstroeter, acknowledges that the ATT score says nothing about a dog breed being "pet" suitable and safe to keep around children and other pets: "Just because a certain percentage of dogs in a certain breed fail, this does not necessarily indicate aggression. Dogs fail for other reasons, such as strong avoidance. If you look at our statistics just from a perspective of aggression or non-aggression, they can be very misleading."

Recent concern over the dangers of pit bulls is not the first time a specific breed of dog has been viewed as particularly dangerous. In fact, the Bloodhound was once considered a threat to humans and house cats.[50]

A study conducted by the National Canine Research Council in 2008 concluded there was significant media bias in the reporting of pit bull-related dog attacks over attacks by other breeds.[51] Of specific interest was a woman fatally mauled by Labradors which was not picked up by anything more than local news, while that same year a similar attack by a pit bull "was covered by at least 285 media outlets, both nationally (in 47 U.S. states) and internationally (in eight other countries). MSNBC, Forbes, USA Today, Fox News, CBS News, and ABC News all picked up the story."