The Pledge of Allegiance

The Pledge of Allegiance is a statement of loyalty to the United States (or technically, first to its flag, and then to the country itself). For most natural born US citizens, they will first encounter it as a form of indoctrination in their early school years. It is also required in its exact form of all newly naturalized citizens of the US.

Reciting the pledge is generally accompanied by covering one's heart, or, if one is in uniform, a salute.

"I pledge allegiance to the Flag of the United States of America, and to the Republic for which it stands, one Nation under God, indivisible, with liberty and justice for all."[1]

The pledge, a ritualized requirement for many US school kids, is asking them to state that they will be loyal to the United States — mandatory patriotism. A pledge they certainly cannot understand the ramifications of at 6- or 7-years old. At that point, it becomes so routinized for children that as they become more aware of what such a pledge might mean, they have long stopped thinking about it; the way you sing familiar lyrics without ever stepping back to analyze them. The indoctrination of students into this formulaic trust that they should be loyal to the US, and without any accompanying discussions of what loyalty means, is no better than any other loyalty oath used throughout history to engender as sense of proper behavior toward a given nation or king. 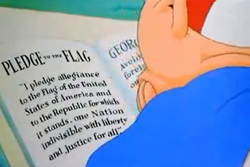 From a Porky Pig cartoon in the 1930s, "under God" is missing because it wasn't introduced until 1954. Deal with it.

The Pledge of Allegiance was written in 1892 by Francis Bellamy, and read as follows:

Francis Bellamy was a socialist, and the cousin of Edward Bellamy, author of the utopian novel Looking Backward, a fact which seems to be lost on the conservatives, who insist on mandatory blind patriotism, although not on libertarians, who do note this fact and see it (correctly, if the Iraq War is any guide) as evidence of a connection between blind patriotism and other functions of the state, such as taxation and war.

The words "under God" were added on June 14, 1954 — over 60 years after the original pledge was written — through the lobbying efforts of the Knights of Columbus, a Catholic fraternal group with a hierarchy and charitable bent broadly similar to the Freemasons.

Criticism of requiring or promoting the Pledge[edit]

In 1940, the Supreme Court ruled 8-1 that children in public schools could be compelled to recite the Pledge of Allegiance (Minersville School District v. Gobitis

In 1943, the Supreme Court reversed themselves and ruled 6-3 that it is unconstitutional to force anyone against his or her will to recite the pledge. This case was known as West Virginia State Board of Education v. Barnette, 319 U.S. 624 (1943).[2]

Many public schools still require every pupil to recite the Pledge anyway. Various groups have challenged this rule, particularly the "under God" clause. Although the religious right attributes opposition to the Pledge to atheists alone, another notable protest of the Pledge was by Jehovah's Witnesses, who refuse to swear to anything less than God.

The naturalization ceremony is another area that could be problematic and ripe for a challenge, but the pledge is not legally binding, and is just part of the overall naturalization ceremony. The binding part of the ceremony is the Oath of Allegiance, which also contains references to God, but you may sign a waiver to remove those particular references.

In 2002, the Ninth Circuit Court of Appeals found that requiring use of the phrase "under God" in the Pledge of Allegiance when used in public schools was unconstitutional for violating the United States Constitution's establishment clause.[4]

Elk Grove Unified School District v. Newdow, 543 U.S. 1 (2004)[5] (reversing Newdow v. Elk Grove, et al., 328 F.3d 466 (9th Cir. 2002)[6] was heard before the United States Supreme court two years later. It was denied on grounds of standing, claiming the non-custodial father did not have grounds to sue on his child's behalf. The actual question of "under God" was not addressed, but the Ninth Circuit's ruling was reversed, so little children in California (as well as Alaska, Washington, and Oregon) still say the words "under God" or face the wrath of their peers, everywhere.

In 2012, an atheist family filed a lawsuit — Doe v. Acton-Boxborough Regional School District - in Massachusetts arguing that the Pledge violated the Equal Rights Amendment of the Massachusetts Constitution.[7] The Superior Court ruled that the Pledge did not violate the state's consitution (but hey, don't all state constitutions have references to God?).[8] The family appealed this decision in 2012 and again in 2013, arguing that reciting the pledge was causing their children to be abused in school and treated as second-class citizens for their refusal to recite the "under God" part of the Pledge.[9][10][11] In May 2014, Massachusetts' Supreme Judicial Court ruled on the 2013 appeal, affirming the judgment of the Superior Court that the Pledge did not violate the state constitution and also judged that the plaintiffs did not "successfully allege" that their children faced repercussions for not saying the Pledge. The Court acknowledged that the Pledge had a "religious tinge" but insisted it was a patriotic practice and its recitation was voluntary therefore it did not discriminate against atheists.[12]