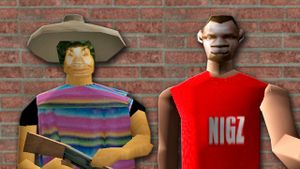 If Obama had a son... he definitely would look better than this.[1]

Ethnic Cleansing is a video game developed by Resistance Records, an underground record label specializing in neo-Nazi and white supremacist "music", which is owned by the white supremacist organisation National Alliance. Based on that information and the game's title, one could probably make a guess as to the game's content and quality and not be far off.[3] 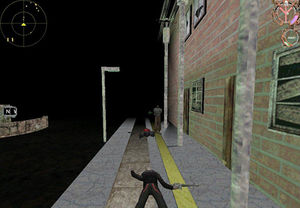 Exactly like you expected, the game is a first-person shooter in which the extremely, extremely threadbare plot concerns a Jewish takeover of the United States. (Apparently, Resistance Records didn't get the memo about the Zionist Occupation Government.) The player takes the role of either a skinhead or a klansman, who, operating out of a crack house, runs through a ghetto killing blacks and Mexicans before descending into a subway to kill Jews. They eventually reach the "Jewish Control Center", where they must kill Ariel Sharon

, former Prime Minister of Israel, in order to win the game.

By default, the game plays a cover version of the racist band Skrewdriver's song "When the Boat Comes".[4] Sample lyrics from said song: "Take no shit from anyone cause the white race rules! We'll fight the communists, 'cause communists are fools! Try to take our nations, and give 'em to the blacks! Won't take it anymore, we're gonna take our nations back! So we say: nigger, nigger, get on the boat! Nigger, nigger, row! row! row!"[5]

Ghastly sentiments aside, the game is also pretty dismal from a technical perspective.

Developed using the Genesis3D engine, this broken game features hideous graphics with supremely terrible models and textures, dismal collision detection, ridiculously short draw distance (about 10 feet, making it look like you're walking in a perpetual fog and making it impossible to spot enemies before they shoot you to death), And more typical features associated with terrible games. There are only two levels, and it crashes regularly,[note 1] especially more so on modern Windows versions.[7] Oh, and there's only one weapon: a machine gun.

The Anti-Defamation League publicized the existence of the game[9] and (being apparently somewhat unfamiliar with the ideas behind open source software) unsuccessfully lobbied the developers of Genesis3D to change their licensing conditions to prohibit the use of the engine to develop racist games. They have also lobbied the Interactive Digital Software Association to encourage their members to adopt such policies.

Stuff Magazine named Ethnic Cleansing the 40th most controversial video game of all time in January 2003. In 2010, UGO ranked it as the #1 most racist video game in history.

The game was featured in an episode of the History Channel documentary series Gangland that focused on skinhead gangs.[6]

As you can probably guess, this isn't a game you can just pick up at your corner video game store. It can only be ordered directly from Resistance Records' website.[note 2] For $14.88.[6] These days, of course, you might also be dumb, bored, or curious enough to download it illegally for free on torrent indexes and the Internet Archive. (Though you'd still likely be overpaying for it.[citation NOT needed])

The game has spawned three even more spectacularly unsuccessful and stupid sequels, White Law,[10] and ZOG's Nightmare and ZOG's Nightmare 2.[11][12] The gameplay of the latter is slightly better and the racist message is slightly toned down -- as in, instead of killing non-white civilians, you kill non-white soldiers. Resistance Records wanted to create an entire series of games based on The Turner Diaries, but this seems to have fallen through.