From RationalWiki
(Redirected from Reptoid)
Jump to navigation Jump to search

Reptilians have become one of the most captivating alien races in our galaxy. This race of Reptilian alien beings originate from the Draco ('dragon') constellation and now find themselves throughout the entire galaxy. Reptilians are also known as Lizard People, Reptoids, and Reptilian Aliens and are claimed to be working along with the American government, or that the Government itself is filled with lizards, to control and manipulate our home planet. The reason many people associate these Reptilians with such actions is because they are thought to have an inherently evil nature. 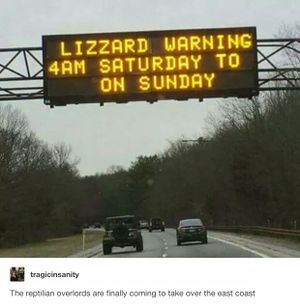 With so many idiotic, crazy, implausible conspiracy theories out there, the general idea popularized by David Icke still manages to be particularly stupid, with claims that these reptiles are actually shape-shifters and that any number of prominent people are "really" reptilians in disguise as "proven" by the "occasional failure" of their camouflage (what sane people living in the real world call camera glitches, such as the red-eye phenomenon and similar optical quirks – or celebrities lifting their tongues to pronounce the letter L). Icke is a conspiracy theorist who claims that the world is secretly controlled by evil shape-shifting lizard people from the 4th dimension. Genuinely.

There are also other ideas about reptilian humanoids in various channeled messages and descriptions of alien abduction, which don't include reptilians shape-shifting, or hiding as humans. Often having the flavor of better-thought-out sci-fi when compared to Icke's ideas, such descriptions basically make the reptilians look like high-technological demons who do nasty things to some unfortunate humans.

Michael Barkun posits that the idea of a reptilian conspiracy originated in the fiction of Conan the Barbarian creator Robert E. Howard. The first appearance of "serpent men" in literature was in Howard's story, "The Shadow Kingdom", published in Weird Tales 1929.[1] This story drew on Theosophical ideas of the "lost worlds" of Atlantis and Lemuria, particularly Helena Blavatsky's The Secret Doctrine, with its reference to "dragon-men" who once had a mighty civilization on a Lemurian continent.[2] Though the notion of intelligent Reptilians manipulating humanity and genetically engineering the creation of humans seems far-fetched, ridiculous and the stuff of sci-fi, the origins of the Draconian Reptilians allegedly date back millions of years ago to a planet near the Draco Constellation,[note 1] where they had the right to conquer and destroy anything that got in the way of their evolutionary progression. When Icke's conspiracy theories came to public eyes, the idea of a reptilian agenda exploded into people's minds by claiming Jew Lizards and reptilian world leaders are trying to take over the world.

Hoaxes involving reptilian ancient underground cities (and more modern stories of underground bases and military involvement, etc.), have a tradition going back to the early 20th century, likely inspired by the fiction of the time. In 1934, American mining engineer G. Warren Shufelt built upon earlier failed hoaxes and treasure hunting scams, claiming to know of ancient gold-filled catacombs beneath Fort Moore Hill in Los Angeles, supposedly the remnants of a hyper-intelligent lizard people.[3] A year earlier, in 1933 he had led people on a wild chase for nonexistent centuries-old Spanish gold. Changing the details of his story, he attributed the new version to an invented Hopi Indian informer.[4] He also claimed to use a radio x-ray device of his own invention to locate things below ground, which turned out to be no more than a sciencey-looking dowsing rod.

[5] preying on women in fitting rooms. Allegedly, the Gokongwei

clan had the mall built as a hunting ground for their reptilian relative, rigging the fitting rooms with trap doors for unsuspecting customers to get caught and fed to the "snake-man" for whatever ridiculous reason e.g. as a lucky charm "to bring good fortune." Despite the over-the-top ridiculousness of such claims, the Robinsons reptilian reportedly caused a public relations nightmare for the company, as customers have expressed hesitancy to enter fitting rooms unaccompanied.[6] One of the reptilian's "victims" was actress Alice Dixson

, who debunked the claims in a YouTube video more than two decades after the conspiracy theory became popular;[7] Dixon even went on to collaborate with Robinsons themselves in a video parodying the reptilian affair.[8] While it has been alleged that the urban legend was propagated by its competitors in an effort to dissuade customers from patronising the mall, one writer opined that the conspiracy theory is rooted in Filipino culture (particularly their colourful mythology such as the aswang and other such supernatural creatures) and the unstable sociopolitical climate of the 90s right after the People Power Revolution, where income inequality, contempt for the elite oligarchs and the moral panic ensuing from rampant abductions and forced disappearances are prevalent in the country.[9]

The greatest popularizer of the idea of reptilians controlling the world has been David Icke. Icke's version, first spread through his books starting in 1999 with The Biggest Secret: The Book That Will Change the World, has lingered on and mixed with other ideas.

Icke is a proponent of a grand unified conspiracy theory, mixing together just about every conspiracy theory you can think of. The great villains are the "Babylonian Brotherhood". They control the media, the scientific community, the banking system, and the religions and the militaries of the world's nations, and not only are many leading figures of all kinds among them, but they are trying to bring about an even more ultimate Global Elite rule of the world. Some of them are human, and some of them are secretly lizard people, usually in disguise or in hiding, often in roles and with behaviors attributed to Jews in antisemitic tropes. The 5–12 feet tall, blood-drinking, shape-shifting reptilian humanoids from the Alpha Draconis star system, now hiding in underground bases, are trying to take over the world – and most of the world's historical ruling dynasties are human-reptilian hybrids. He contends that most of the world's leaders are related to these reptilians, including George W. Bush of the United States, and Elizabeth II of the United Kingdom.

In the 2020s – a century after the idea of lizard men became a theme in fiction – Icke's conspiracy theory version and other variations in large part derived from it remain popular on the web, for example on the platform TikTok where conspiracy theory videos are generally popular.[10]