From RationalWiki
< User:Blue
Jump to navigation Jump to search 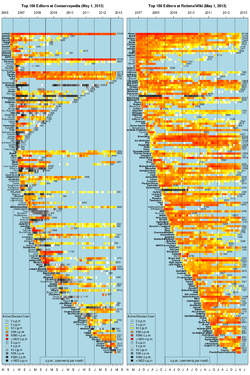 This is the ongoing analysis of RationalWiki's active (and not-so-active) editors. The table here, which breaks down an editor's contributions into specific months, calculates an average edit rate, and determines how "active" an editor is using real numbers (mostly integers).

These numbers are a rough guide to how these labels are applied. Contributions during the most recent three months have been selected as one of the criteria for assigning an "activity level": Out of ≈ 3,100 editors who left their mark on RationalWiki, 550 did so over the last three months, showing various degrees of activity:

The busiest 50 of these editors can be found in the following table. 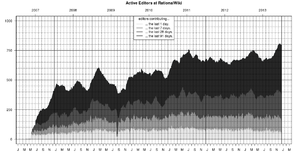 RationalWiki's own page statistics includes an entry active users. Those are defined as users who have performed an action in the last 7 days, while at the similar page at wikipedia, this period is set for 30 days. For instance, on June 5th, 2009, RationalWiki counted 140 active users, while wikipedia had 158,605. Calculating these numbers for both time periods yields this graph - though, for the graph only those users are counted which made at least one edit, and not only performed blocks, etc.